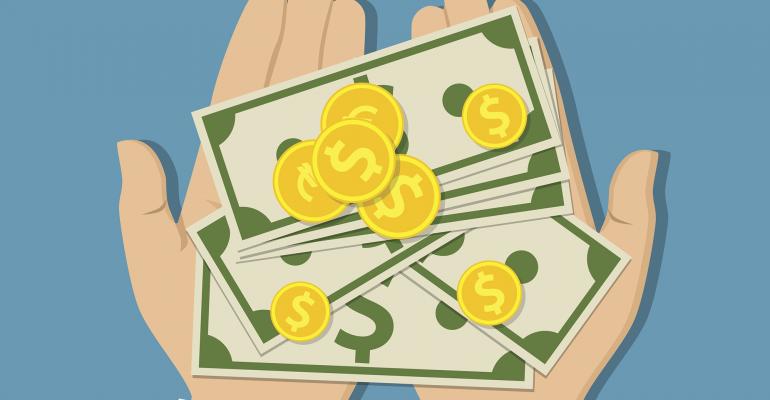 A handful of veteran advisors say the recent move to charge clients income-based fees has been tried before, and offer some cautionary advice of their own.

When three-time Olympic medalist and financial advisor Lauryn Williams opened her Dallas-based firm, Worth Winning LLC, she gave a lot of thought to how she was going to charge clients. Her niche is athletes and young professionals. Those clients often didn't have a lot of investable assets yet, and so she'd need to find a way to charge for her work that didn't rely on the size of the portfolio. Like an increasing number of advisors, she decided to base her fee for financial planning on a percentage of the client's income—even though that can vary dramatically year-to-year for some of her athlete clients’, depending on sponsorships and schedules. She uses a tiered structure, and continues to fine tune it, but it's working for her and she is an advocate for the pricing model among her peers.

While more advisors are, like Williams, experimenting with fee structures, they are still the outliers. For most, fees center around two models: a trailing commission paid by a product issuer, or a percentage of assets under management paid by the client for financial advice. It’s been this way for years, perhaps because it’s relatively simple, and advisors can bank on the stickiness of the recurring fees.

Critics can find fault with both. Commissions can create bad incentives and outcomes that aren’t always in the best interests of the client. AUM-based fees keep the focus on the size of the investment portfolio, which doesn’t always jibe with what an advisor does for a client. For years some advisors have been experimenting with alternatives, including hourly fees, one-time charges and monthly retainers, all with various levels of success.

Recently, income-based fee models have come into focus, with advisors like Williams advocating for them and a recent review by Michael Kitces demonstrating the workability of the model. More and more newer advisors are reporting some success in implementing it.

Williams says an income-based fee allows an advisor to practically, if not always profitably, serve clients who want advice but have little or no assets. Those clients tend to be younger but can grow with the advisor—a generation of medical specialists and advanced degree holders, for example, with high levels of debt who are entering the workforce after years of schooling.

Appealing to younger clients comes down to putting together a fee model that is fresh and flexible, according to Andrew Sivertsen, a Quad Cities-based advisor and partner at The Planning Center. “If you are a young planner and want to represent [your] own generation [you] will go this route,” he said. The AUM-based fee structure, and financial planning that went with it, “was put together by, and for, boomers.”

“We’re billing on the entirety of your financial life because that’s what clients have asked us to be responsible for,” added H. Jude Boudreaux, also an advisor at The Planning Center. The Planning Center incorporates a mix of income- and net worth-based fees.

Advances in technology have also played a role in backing off of the AUM-based models, said Scott MacKillop, CEO of First Ascent Asset Management. “You could make a case for when financial advisors were more focused on just delivering asset management and the technology that we have today wasn't quite as far along, there probably was more work to trade bigger accounts.”

It’s different today, he said. “With the technology we have—it doesn't take any more work for us to manage a $100,000 account than it does $1 million account.”

Then there’s alignment of fees and client demographics, Sivertsen explained. “A lot of younger, higher-earning individuals in their 30s, they may have a few hundred thousand in debt, but [they are] coming out with huge salaries [and] will respond to this fee structure more favorably.”

But are income-based fees really new? Some advisors have been using the model for decades, with various levels of success, and their experiences could help inform some of the younger adopters, says John Sestina, an author, advisor and founder of John E. Sestina & Company, based in Columbus, Ohio. He has been charging clients a sliding income-based fee since the early 1970s, but found he was better off changing to a net worth model with a minimum fee a decade ago.

“It’s so weird in financial planning—people don’t revisit the history,” said Sestina. “Some of us old dogs, we’ve been through it. We know what works and what doesn’t work. What people appreciate and don’t appreciate.”

“It’s so funny when I heard Kitces was writing on this, like he’d discovered a new way to charge fees,” he added, laughing. “They don't pay attention. They're always going to reinvent the wheel. They’ve always got a better idea and they ignore their history.”

When Sestina set out with an income-based fee, decades ago, it allowed him to provide his financial expertise to a broader range of clients. But he still encountered situations that didn’t quite fit with the model. Whenever he encountered a high-earner with no assets and minimal financial planning needs, the resultant fee seemed unjustified for the work he was doing. That mismatch eventually led to the switch to a net worth model.

There are other issues with a strict income-based fee model. When a client loses his or her job, advisors could struggle alongside clients. Williams said she would adjust accordingly in a situation like that, including reaching out to her network to help her client find a new job.

Advisors who charge an income-plus-net-worth-based fee might lose out on fees because clients “forget” about assets or try to hide them from the advisor. David Metzger, an advisor and founder of Chicago-based Onyx Wealth Management LLC, said he fortunately hasn’t come across a situation like that, to his knowledge, but recognizes it’s a risk.

“I gave that scenario some thought when I designed my fee schedule and concluded, frankly, that that’s on (the client),” he said. Clients withholding information to save on fees will have suboptimal financial planning that could be more costly in the long run, he noted. He also offers an investment management agreement billed with an AUM fee schedule, if a client just wants asset management without financial planning.

“Those kinds of issues are few and far between and likely to take care of themselves through self-selection,” he said. “I had zero intention of designing my business—and fee structure—by catering to the lowest common denominator."

Other advisors, like Elyse Foster, founding principal and CEO of Harbor Wealth Management in Boulder, Colo. used an income-plus-net-worth-based fee structure over 30 years ago. Her justification boiled down to complexity: more income alongside a higher net worth meant more work for the advisor. But she also encountered situations similar to those of Sestina.

“What we found when we did this is that there's pushback on the part of the client,” Foster said. A client might have $1 million in income, but only want a regular savings program, laddered treasuries and some indexes, she explained. “It was a fair complaint: just because I have a high income doesn't mean I'm more complicated.”

Her solution for the misalignment was to try to predict how much time each client would need with an advisor and bill accordingly; today, she charges clients based on the time spent working with them in the previous year.

Harbor Wealth Management assigns a billable rate to each employee, who tracks time spent on each client, down to five-minute increments. The next year, those calculations go into the yearly rate charged to the client. Finding a fee for the first year with a new client is a mix of science and art: the client is compared to similar clients and assigned a fee that fits that client’s profile, but there’s still an element of uncertainty. Meanwhile, high net worth clients may have their fees capped and there’s a minimum fee on the low end.

“We just think it's the only fair way to do it,” said Foster. “Oftentimes we're lucky if we make enough money the first year.”

“But we do try to build enough profit into the second year,” she continued. “It's based on actual time and our AUM is as well—so if we manage people's assets, we keep track of how much time we spend doing that. Then wrap in all the planning and the assets under management together on an annual basis and analyze it for fairness.”

Advisors who have looked at income-based fees all struggle to balance concepts of fairness, coming up with inventive solutions.

Investors are driving more inventiveness with fees. Research shows that they want more fee-based advising, especially among clients who have the most dependence on advisors. Almost nine in ten advisor-directed investors want to pay a fee for advice, instead of being charged on a commission basis, according a Cerulli report released earlier this year. Even 44 percent of self-directed investors preferred a fee-based advice structure.

The movement towards fee-based models will grow, as advisors position themselves as their clients’ partners in achieving long-term goals, rather than transaction-facilitators, said Scott Smith, director at Cerulli and lead analyst on the report. That trend will continue, he said, unless regulators decided fee-based models caused some form of harm to clients.

While the income-based model is growing in popularity, it might be better off as a stepping stone to something more evolved, said Joseph Maugeri, managing director of corporate relations for the CFP Board. He’s in favor of a formula similar to Metzger’s, which combines an income-based fee, to account for cash flow management, and “layers on” a net worth component, as assets grow.

“Fees should be commensurate with the complexity of the advice,” he said. “I don’t think [the income-based fee] is going to be a panacea to the fee problem. It has to be something that measures the complexity, but at the same time you can rationalize it with the client.” Even a net worth-based fee, which Maugeri characterized as a derivative of the AUM-based fee, is too simple.

Many observers say that while income-based fees have been tried before, the renewed attention they’re receiving is a positive sign: The next generation of advisors are open to taking a hard look at the value they are providing their clients and are committed to putting an accurate, and fair, price tag on it.