/sites/all/themes/penton_subtheme_wealthmanagement/images/logos/footer.png
Recent
Recent
Eight Must Reads for the CRE Industry Today (Dec. 9, 2022)
Dec 08, 2022
Meta to Sublet Part of Dublin Headquarters After Job Cuts
Dec 08, 2022
Without Digital Technology, Your Financial Advisory Firm May Be Stuck in the Stone Age
Dec 08, 2022
Co-Living Sector Transforms as it Faces Pushback from Developers and Lenders
Dec 08, 2022
Featured
The 10 Best and 10 Worst States in Which to Retire in 2021
Jul 15, 2021
I’m an Advisor. This Book Changed My Life
Aug 31, 2022
Fifteen Must-Listen Business Podcasts for Advisors
Aug 14, 2020
Celebrity Estates: Jay Leno and Planning for Classic Car Collections
Feb 22, 2022
RIA Trend Report - Practice Management and Operations
brought to you by 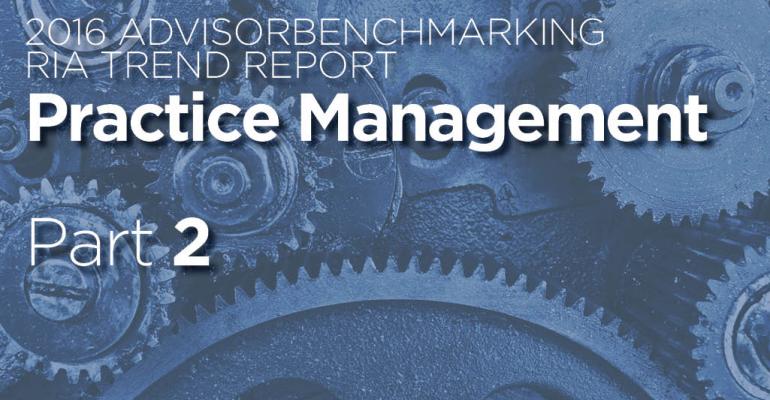 Forty-five percent of respondents indicate improvement in client satisfaction as one of their top-three initiatives.

For 2015 and 2016 we summed the responses for each year for each initiative to better compare year-to-year changes and we note some interesting differences in this year’s survey. While profit growth via higher AUM and improvement in marketing and business development are the most popular responses in both years, the percentage of advisors indicating them as one of their top 3 initiatives declined slightly in 2016. The former declined by seven percentage points to 69% and the latter by five points to 60%. The largest year-to-year changes occur in the next two most popular initiatives. Forty-five percent of respondents indicate improvement in client satisfaction as one of their top-three initiatives, a material increase over 37% last year. Also, at 35% this year compared to 24% last year, an even larger increase is observed in the percentage of advisors indicating improvement in strategic business planning. The year-to-year changes appear to reflect RIAs adopting a more granular approach growing and managing their practices.