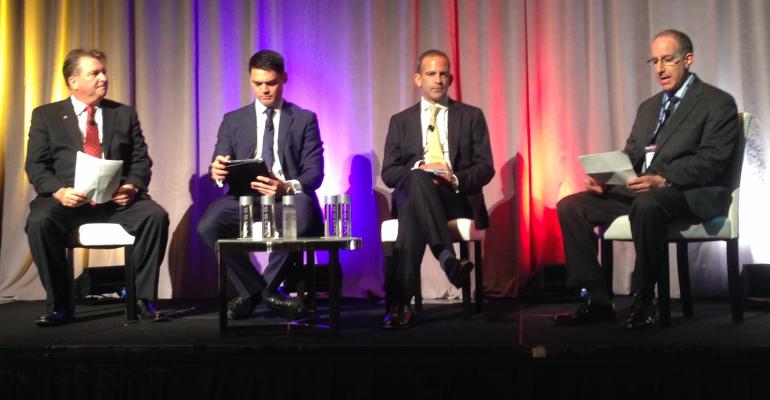 The world's millionaires combined wealth rose 10 percent to $46.2 trillion last year and the demand for new investing opportunities continues to increase. In a panel at Pershing’s INSITE conference, Federated Investors Brian Holland shared several international investing opportunities for high-net-worth clients, particularly those non-U.S. resident clients. As Pershing’s Jim Crowley pointed out, 30 percent of the clients serviced by the custodian’s advisors are outside of the U.S.

Looking at countries, Holland says Germany continues to be the engine of growth for the rest of Europe, but noted that overall, Europe is growing above its 10-year trend. Peripheral countries, Ireland, Italy—also are doing well. “We expect earnings growth to drive European shares higher,” Holland says. In terms of sectors, Holland likes the European auto and media sectors, as well as the travel and leisure industry.

And despite the recent downturns of emerging markets, that area continued to be a favorite for Holland, who says there’s  very positive future for these markets long term. But emerging markets are a “set it aside & forget it” play right now, adding advisors and investors need to be aware that emerging markets should be looked at as a spectrum.

At Federated, Holland takes a country-first approach when looking at the space, saying that getting the country right first is majority of the issue. But he notes that investors can get the country wrong but still come out ok, as long as they get it right on stocks,. For example, Brazil a few years ago might have been a bad country pick, but if investors avoided anything controlled by the government, they could have done quite well, Holland says.

As for Russia, Holland says he invests there, but adds that it’s a risky proposition. There are some great assets in Russia, but investors  just have to be willing to risk it. “There’s a Putin discount on the market for a reason,” he says.