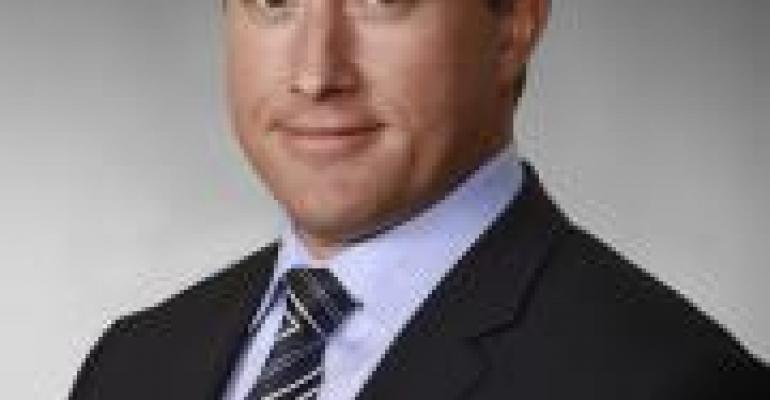 Real Estate In A Global Recovery: The Outlook For 2014

The real estate landscape is changing as we enter 2014. Positive economic data across geographic regions have persuaded markets that a global economic recovery is taking hold. The Federal Reserve endorsed this view in December, and began to taper its bond-buying program in January. Markets rallied at the upbeat outlook and longer-term interest rates rose to 3%. Most recently, the World Bank forecast growth in global GDP from 2.4% in 2013 to 3.2% in 2014/2015. Economic growth is generally good for commercial real estate, as it creates demand, increases occupancy rates and drives rents higher. In this cycle, growth is taking place amid years of limited new construction—another tailwind for the sector.

The higher interest rates that accompany growth can be problematic, however, as they can increase the cost of leverage and decrease equity returns. But interest rates do not, by themselves, trigger downturns in real estate markets, as the chart below illustrates. 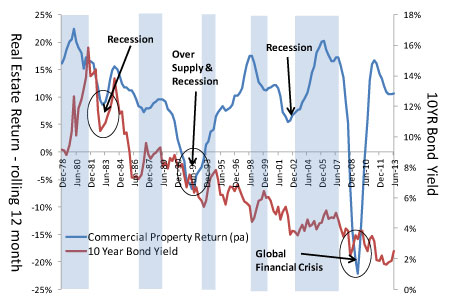 The blue line tracks real estate returns through several recessions, culminating in the crash of 2008. The red line shows the10-year Treasury bond yield, and the blue shading shows periods of rising interest rates. The inconsistent correlation between the two over time is stark—supply and recession have had much more impact on real estate returns than interest rates.

Changing interest rates do however have an impact on the best approach for investing. Some types of real estate are able to perform better in a rising-rate environment than others. The following chart compares the sensitivity of certain asset types to an improving economy, relative also to rising interest rates. Those with the shortest leases—the most economically sensitive—are relatively more able to capture improving growth. Hotels, of course, are the most flexible, with one-day leases. 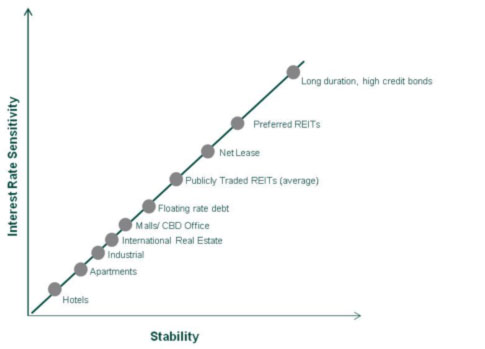 Apartments’ short leases may provide another hedge to increasing interest rates, as they can capture market rent inflation. Rents tend to track wages, which in turn, drive the consumer price index. And higher mortgage rates increase the propensity to rent rather than buy, which drives demand for apartments.

Net leases are potentially among the most vulnerable to rising interest rates, with only long bonds and preferred securities trailing them.

An optimum real estate investment would provide income with capital growth, the ability to perform well in a rising interest rate environment and also allow liquidity. Unfortunately, no one single type of real estate vehicle provides all of these attributes. For instance non-traded REITs produce attractive income and low correlation, but fall short on liquidity and the ability to perform well when rates increase. Therefore, we recommend investors take advantage of the benefits of an allocation to multiple real estate investment types.

A challenge for non-traded REIT investments: too much net lease?

Seventy-seven percent of the non-traded REIT market is net lease, most of which have bond-like structures and 10-year fixed-rate terms. About 60% are leases to investment-grade tenants, with no rent increases in their contracts. Leases to non-investment-grade tenants may permit small increases. It is difficult to overcome the disadvantage this fixed cash flow creates in the face of rising interest rates.

We believe market conditions are now more favorable for publicly traded REITs, which are coming off a very tough year. They were caught in the crosshairs of rising interest rates and investor skittishness about the end of quantitative easing. The specter of higher rates set off alarms among many investors, and REITs traded down despite growing demand, stronger cash flows, lower vacancies and a pickup in employment. They are currently trading at about 15% below net asset value—historically, an attractive entry point.

Liquidity was a big factor in listed REITs’ lackluster performance last year. Jittery investors were able to sell on worries about what Fed tapering would mean for interest rates, and they did. But this sell-off has had a spillover impact on non-traded REITs; until public REITs trade again at premiums, non-traded REITs may not be able to realize large gains through initial public offerings.

This is an abrupt turnaround. Non-traded REITs—most of which bought assets at or near the bottom of the real estate cycle—had a record $15 billion in liquidity events over the past two years that reaped considerable premiums. The chart below illustrates the internal rates of return they realized through different types of liquidity events. These outsized returns may be harder to replicate in 2014. For comparison purposes we include Inland American, which has not undergone a liquidity event and reflects the impact of investing across a full cycle.

When a public offering is unlikely to price at a premium, whether due to market conditions or the kind of assets owned, a REIT can be left in a difficult position, as pricing a share offering at or below NAV will be dilutive. Instead of going public, we believe management should consider the benefits of a private market liquidation, where a property would be more likely to fetch a price at or above NAV.

We believe this is the time for investors to rebalance their real estate portfolios to favor those sectors and instruments most likely to benefit from the recovering global economy. We believe a more diversified and flexible portfolio will outperform, and offer the following guidance.

Scott Crowe is the Global Portfolio Manager for Resource Real Estate. Previously, he was the lead Global Portfolio Manager for Cohen & Steers, where he led the investment and research team of over 20 portfolio managers and
analysts. Mr. Crowe was accountable for over $10B in FuM across the firm’s global, international and emerging market portfolios. Prior to this, Mr. Crowe held the position of Head of Global Real Estate for UBS Equities Research where he built and managed the US REIT division while leading a global team of more than 40 analysts.