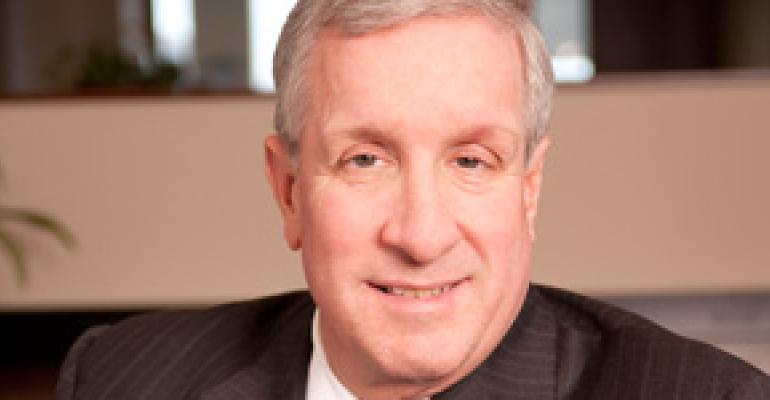 He’s Bob Mulholland, head of the financial advisor force at UBS Wealth Management Americas, and he’s not to be confused with the brokerage’s CEO Bob McCann. And this other Bob (Mulholland) is pleased he doesn’t work today at brokerages called Merrill Lynch, Wells Fargo and Morgan Stanley. (The other Bob sounds pleased too.)

Strange, you may think, since once upon a time, Mulholland wielded substantial power and was a revered figure, like McCann, among the Thundering Herd. Mulholland was the trailblazing second-in-command of Merrill’s brokerage unit. Doesn’t he miss his old home? Yes, but the old home isn’t the same place anymore, he says.

“We are really the only major relevant firm that actually went into the 2008 and 2009 abyss and came out the same firm,” Mulholland told Registered Rep., in an exclusive interview at his office in Weehawken, N.J. “We went in as UBS and we came out as UBS. The others, they came out entirely different.”

Bob Mulholland is a straight shooter. He’s an imposing man, over six-feet tall, ruddy-faced and witty, amateur fisherman and keen golfer too. Down-to-earth, folksy. As they say, you know when he steps into the room. “Truth be told, I missed what I did at Merrill Lynch, which is essentially the same job as I have at UBS,” says Mulholland, recalling his 25-year career at Merrill, starting as an account executive in 1979. “But the only thing that could get me to come here was the opportunity to work with people I wanted to work with, and at a firm that wasn’t integrating like the others.”

That might sound self-serving. Until you consider UBS has had troubles aplenty -- the flight of customer assets and wholesale FA defections as the brokerage has wrestled with the aftershocks of the credit crisis, the sale of impaired assets and an international tax scandal. Yet Mulholland, relishing his latest challenge, anticipates cultural and operational damage at firms that are integrating – after their shotgun marriages made as Wall Street was on the brink of disaster not long ago.

Today, McCann’s near neighbor (they live about a mile apart), on a beautiful stretch of the Jersey Shore, has the difficult job of daring a once demoralized advisory force at UBS to new heights. Mulholland is McCann’s “field general” in UBS brokerage’s turnaround plans to retain advisors, gather assets and return the business to profitability – and you can just sense the excitement in his voice. (Mulholland’s official title is managing director, head Wealth Management Advisor Group.)

With many investors still shell-shocked after the market rout of 2008 and 2009, sidelining over $9 trillion in bank and money market accounts, by the Federal Reserves calculations, Mulholland sees a unique opportunity. “These investors will make a choice of where they want to come back to,” Mulholland says. “Bank, discounter, brokerage, whatever. But when they need good, solid advice we are the place we want them to be at because we are all about financial solutions at UBS.”

Mulholland and McCann share much in common. They scaled the ranks of Mother Merrill – McCann ran the brokerage force, a famous trader, he was formerly head of the sales division and the equities business, and was in the running for CEO – and both grew up in Pittsburgh, once a major steel center. Both are very proud of their Irish heritage. In fact, Mulholland keeps the sash he wore at a local St. Patrick’s Day Parade in a glass case on his office wall; and he remembers standing on the bridge in Ireland made famous by the movie, The Quiet Man, starring John Wayne. (His character, returned yank Sean Thornton, tells the wondrous locals that life was no picnic back in Pittsburgh, his hardscrabble hometown.)

Of his vast experience at Merrill, moving up from small offices to oversee offices across the U.S. and Latin America, as head of the Americas, Mulholland likes to joke that he handled the small, medium, large and extra large. Mulholland and McCann were not bosom buddies. They’d played golf together maybe three or four times in the five years after Mulholland left Merrill, and then ran an institutional brokerage out of New Jersey.

“Most people think I was his [McCann’s] guy at Merrill and he just brought his guy over to run sales at UBS, and that is not true,” Mulholland says. “I really wasn’t on his management team there. So, it was really interesting that when he called me up one day, out of the blue, to have lunch. I asked Bob, ‘Why did you call me?’ And he says, ‘I know how you run things and I would like you to come and be my partner at UBS.’”

Adds Mulholland: “When I found out who else was coming, that we would run the firm in an FA-centric and client-focused fashion, I said to Bob, and this is a phrase we use here now, ‘I am all-in.’”(As in poker). As it turned out, Mulholland would be joining a batch of former top Merrill guns on McCann’s management and so-called “renewal team” – a group that includes Brian Hull, John Brown and Paula Polito -- though McCann insisted he wasn’t creating “Merrill 2.0.”

The business he now oversees (the job also has him managing “advisory strategy”) has some 6,870 FAs, roughly where it will stay. But the network is down from 8,760 about a year ago. It had some $721.6 billion in client assets at the end of the first quarter, versus about $1 trillion in assets at each of its major rivals, including Bank of America’s Merrill Lynch and Wells Fargo. FA headcount at each is 15,000 or more.

Analysts, including Alois Pirker of Aite Group, tell Registered Rep. that the UBS wealth management unit of the Swiss banking giant requires a much larger network of FAs–that is, scale–to prosper. Mulholland disagrees. He dismisses the view that larger players like Wells Fargo have a competitive advantage over UBS because of their size, which lowers overhead costs per broker. “Scale helps the firm but scale does not help the FA or the client,” Mulholland says. “What scale does is commoditize an FA.” McCann has said previously that its small size versus peers, makes the brokerage much more flexible and reactive.

In the time since Mulholland came aboard last November–and replaced Jamie Price in a management reshuffle in January–there’s no doubt things are picking up at the UBS brokerage, though it is still not out of the woods. Mulholland credits some of this to the market recovery in full swing by late last year. But he also believes various initiatives by the new management team have positively improved the climate.

FAs producing more than $250,000 in annual revenue jumped from 57 percent to 74 percent in the first quarter. The brokerage unit has its sights set on advisors generating an average of $925,000 in the coming years. That compares with an average of $725,000 last year. On the profit side, Wealth Management Americas reported a first-quarter decline from $171.5 million to $14.1 million. However, that’s an improvement from a year ago when the unit posted a loss of $30.5 million. The brokerage is targeting annual pretax profit of close to $1 billion on a cost/income ratio of 80 percent to 85 percent, all with the help of a relatively modest $40 million cost-cutting campaign along the way. Officials say real estate will be a soft touch since the present infrastructure was built for 10,000 FAs. Meanwhile, the wealth management business will focus more on advice for high net worth clients with $1 million to $10 million to invest and on ultra high net worth clients with $10 million to invest. It will also offer a variety of products, annuities, mortgages, life insurance and alternative investments among them.

The stakes are high. In the first quarter, net new money outflows were about $6.77 billion ($6 billion from the U.S. division alone), though that’s an improvement from $11.56 billion from the fourth quarter of 2009. UBS cited restructuring charges of $18.8 million and a jump in deferred compensation awards to FAs for the decline. And while it was still losing assets, Mulholland explains much of that is the result of the high FA turnover last year showing up in the first quarter numbers. He said the “vast majority” of FAs at the firm 12 months or longer are now net new money “positive.” Last time that happened was in the first quarter of 2008. Mulholland said another group, some 1,000 FAs who joined in the past 12 months, are on track to exceed asset targets this year though he was not specific.

The recovering market has clearly played its part. But UBS has also been luring big accounts, such as a recent $700 million account from an investment bank customer. Then there is Growth Plus, the incentive program for FAs that’s based on loyalty and growth. After the two Bobs looked at each other at an 8:00 a.m. meeting in early January, it was actually sweetened. As a result, qualifying FAs receive a portion of their compensation earlier under the plan. “We changed the plan because we were not totally comfortable with it; and this was the right thing to do,” recalls Mulholland. “It showed the FAs we had flexibility.”

Unsurprisingly, morale is much improved these days at UBS Wealth Management Americas. A survey by chief marketing officer Paula Polito showed as much as a 20 percent surge in employee satisfaction levels.
To be sure, FAs are still leaving, some for rivals. But the traffic flows in both directions too. UBS is taking scalps from the large wirehouses. Mulholland notes, that on average, there is a $200,000 or so AUM difference–in UBS’ favor–between the FAs who leave and the new arrivals. “I am not saying I don’t mind having a $450,000 producer leave our firm,” Mulholland says. “I am simply saying that we have attracted better FAs than the ones who have left.”

After a freeze was lifted in January, the UBS brokerage has ratcheted up recruitment. In January, the brokerage started with six Letters of Understanding for potential recruits. The number has since grown to 100. Mulholland said the number of new FA hires has risen from the “single digits” in January to up to some 70 in April. A training program for new recruits, starting with 180, is expected to start in August.

Mulholland says the turmoil that engulfed the brokerage unit through 2009, hurt the overall training of FAs – so much so that UBS is making up lost ground with a new “Win Back” training program. Some 1,000 FAs who joined UBS in the past 12 months have signed on so far. (For FAs who want to polish off their presentation skills, UBS will have outside experts evaluate their videotaped mock sales performance.)

Mulholland recently returned from a high-powered motivational meetings at The Phoenician hotel, in balmy Scottsdale, Arizona for UBS wealth management managers and FAs. It was big on recognition and high on positive thinking, too. About 300 managers listened to Bob McCann outlined strategy and to the other Bob talk about leadership.

“I got this unsolicited e-mail from one UBS advisor out in this small town who’s been in the industry 50 years,” recalls Mulholland. “He asked me, ‘What did you do to my manager? Because he came back to the office on Monday from the meeting in Arizona all charged up! He was energized and he was all fired up.” Mulholland was gratified. It was one clear signal for him that things are heading in the right direction. “When I have someone who is 50 years in the business e-mail me and say, what did you do to my manager, I love that,” he says.