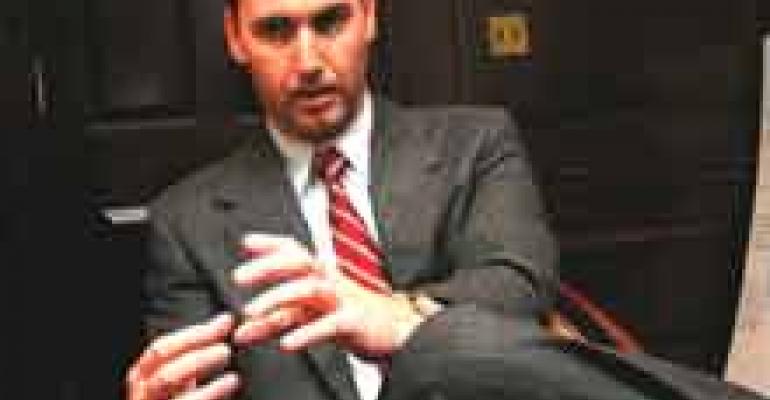 The following story is based on a lengthy interview with former Salomon Smith Barney broker David Chacon. A longer, more complete profile of Chacon will appear in the August issue of

Registered Rep., which is scheduled to be published the first week of August.

Congress, the SEC and others have been looking for a smoking gun in their investigations into corporate underwriting during the 1990s. Well, former Salomon Smith Barney broker David Chacon may be their man. The broker, who filed a lawsuit for himself—and on behalf of the investing public—says a group of people, whom he dubbed "The Telecom Mafia," were personally enriched with massive allocations of hot IPO shares with the understanding that they would then funnel investment banking business back to Salomon Smith Barney.

In his suit, Chacon alleges that shares of hot IPOs were funneled into the accounts of wealthy, powerful telecom executives, sometimes—as he says—without those execs having previously putting in orders for such stock—after shares of those stocks had already started trading. "It was a risk-free investment," he says, noting that other approved, yet smaller, investors were, as a result, excluded from deals. Chacon initially filed his suit as a discrimination claim in mid-2000.

"I was involved," he acknowledges when talking with Registered Rep. Wednesday afternoon. For Chacon, helping rich people get richer isn’t an issue; it’s just doing it at other brokers’ and their clients’ expense that started to wrankle him. He alleges that various telecom execs, the "Telecom Mafia," were allowed to purchase, nearly risk-free, huge allocations of hot IPOs—that they could later flip or sell—while regular retail brokers were being told they had to get clients to buy this stock and hold it. That is, if the brokers could get a piece of the IPO at all. "I remember the syndicate meetings with the brokers," he says.

Chacon says he started raising concerns in 1999, because he felt qualified investors were being left out of offerings while others were unfairly enriched—personally—in exchange for investment banking business. This may violate securities laws. In some cases, he says, shares were granted to folks like Bernard Ebbers, former head of WorldCom, days after the shares had been trading higher in the market and then sold for massive profits. In essence, Ebbers, Chacon says, was given a gift.

"They’re using the term ‘spinning,’ that’s the terminology," says Jeff Liddle of Liddle & Robinson, who represents Chacon in his legal claims, referring to the practice of offering IPOs to executives. "But the spinning should be used in more the media sense. This all gets back to the ‘B’ word – were these bribes? That’s the bottom line."

Giving out lucrative grants of shares to important people is a common practice among brokerage and securities underwriters, and if there’s no quid pro quo attached, it may not be illegal. Congress is currently investigating whether WorldCom execs and others received favorable IPO allocations from Salomon Smith Barney.

The House Financial Services Committee questioned SSB star telecom analyst Jack Grubman on this topic on July 10. Grubman, who is under fire for his alleged conflict of interest as an analyst, said he didn’t "recall" whether IPO allocations were given to top executives. During Registered Rep.’s lengthy interview, Chacon pointedly said, "I know the answers to those questions." Then Chacon said, "Grubman’s a liar." Calls to committee member Congressman Paul Kanjorski (D, Pa.), were not returned.

Chacon’s accusations of iffy backroom dealings among the rich and powerful belie the young broker’s ambitions. Chacon says, from his start as a rookie broker in his mid-20s, he wanted to become "a player." Attached to the glitzy Los Angeles office of Smith Barney, Chacon said he wanted to get into the mind of billionaires—and build relationships with powerful people. From his early days as a financial consultant, it became clear to Chacon that he wanted to be a relationship broker, or power broker—not a regular retail broker.

Eventually, Chacon—who got his job by offering to work for free and by saying the firm could fire him if he weren’t the number one producer in his class—was promoted to senior vice president in under three years at the firm. He had a partnership with another broker in the office, Rick Olsen, who, as he says, supervised the accounts of execs including Ebbers, Joseph Nacchio, former head of Qwest, Jim Crowe, CEO of Level 3 Communications, and Clark McLeod, former CEO of McLeodUSA.

Chacon says he drew the line when the fortunes of the companies going public intertwined with the fortunes of the companies owned by the individuals buying that stock. In short, he says, those IPOs seemed more designed as pump-and-dump schemes to enrich a coterie of rich and powerful investment banking clients rather than as a capital raising function for a legitimate going concern. In addition, he found a conflict with those that he believed were getting allocations in exchange for a favor—more business for Smith Barney.