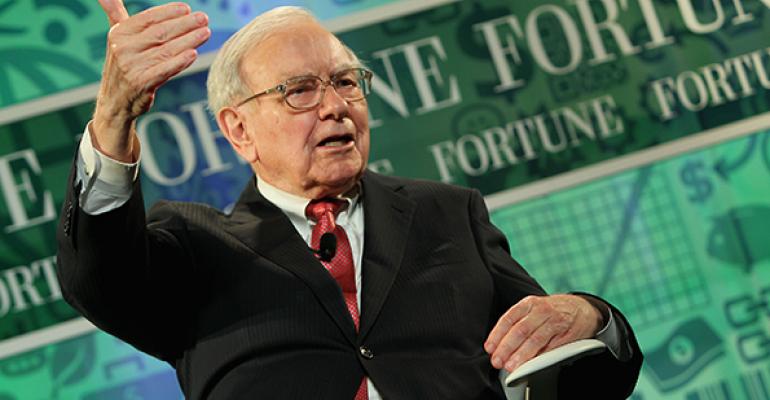 By Tom Metcalf and Jack Witzig

(Bloomberg) -- In a year when populist voters reshaped power and politics across Europe and the U.S., the world's wealthiest people are ending 2016 with $237 billion more than they had at the start.

Triggered by disappointing economic data from China at the beginning, the U.K.’s vote to leave the European Union in the middle and the election of billionaire  Donald Trump at the end, the biggest fortunes on the planet whipsawed through $4.8 trillion of daily net worth gains and losses during the year, rising 5.7 percent to $4.4 trillion by the close of trading Dec. 27, according to the Bloomberg Billionaires Index.

“In general, clients rode through the volatility,” said Simon Smiles, chief investment officer for ultra-high-net-worth clients at UBS Wealth Management. “2016 ended up being a spectacular year for risk assets. Pretty remarkable given the start of the year.”

The gains were led by Warren Buffett, who added $11.8 billion during the year as his investment firm Berkshire Hathaway Inc. saw its airline and banking holdings soar after Trump’s surprise victory on Nov. 8. Buffett, who’s pledged to give away most of his fortune to charity, donated Berkshire Hathaway stock valued at $2.6 billion in July.

The U.S. investor reclaimed his spot as the world’s second-richest person two days after Trump’s victory ignited a year-end rally that pushed Buffett’s wealth up 19 percent for the year to $74.1 billion.

“2016’s been event-driven with global news driving prices rather than fundamentals,” said Michael Cole, president of Ascent Private Capital Management, which has about $10 billion of assets under administration. “The belief that Trump is going to come in and deregulate big parts of the economy is driving the markets right now.”

The individual gains for the year were dominated by Americans, who had four of the five biggest increases on the index, including Microsoft Corp. co-founder Bill Gates, the world’s richest person with $91.5 billion, and oilman Harold Hamm.

The country’s richest were largely opposed to a Trump presidency during the election, including Dallas Mavericks owner Mark Cuban, who told the media in May that stocks could fall as much as 20 percent if Trump were to win the election.

U.S. billionaires -- including Buffett -- favored Trump’s rival Hillary Clinton. Still, they profited from his victory when they added $77 billion to their fortunes in the post-election rally fueled by expectations that regulations would ease and American industry would benefit.

The New York real estate mogul is building a cabinet heavy on wealth and corporate connections, and light on government experience, a mix that hedge fund billionaire Ray Dalio said last week would unleash the " animal spirits" of capitalism and drive markets even higher. Dalio is the world’s 63rd-richest person with $14.1 billion.

Investors and executives welcomed Trump’s picks, including billionaire Wilbur Ross to lead the Department of Commerce and former Goldman Sachs Group Inc. executive Steven Mnuchin as his Treasury secretary, who have a combined net worth of at least $5.6 billion, according to the index.

“You know, I was not opposing Trump as much as most people,” Saudi Arabian billionaire Mohamed Bin Issa Al Jaber said in a Dec. 11 interview. “He’s capable and -- as a businessman -- he’s shrewd about the bottom line. The people he’s surrounding himself with have baggage but they’re also successful and shrewd.”

Gates remained the world’s richest person throughout the year. Amancio Ortega,  Europe’s richest person and founder of the Zara clothing chain, was in second place on the index for most of the year until he ceded it to Buffett in November. Ortega, who dropped $1.7 billion in 2016, is the world’s third-richest person with $71.2 billion.

Wildcatter Hamm’s fortune was propelled by a strengthening oil price and expectations a Trump administration will slash fossil-fuel regulations. Hamm added $8.4 billion to more than double his fortune to $15.3 billion. He led the 49 energy, metals and mining billionaires, who were the best-performing category on the ranking, adding $80 billion and reversing the $32 billion fall they had in 2015.

Billionaire brothers Charles and David Koch each dropped $2 billion after Koch Industries reported on its website that annual revenue is estimated to be "as high as $100 billion," compared with the estimate of "as much as $115 billion" that the conglomerate published on the site previously. Company spokesman Rob Carlton stated in a Nov. 17 e-mail that Koch revenue fluctuates with the price of commodities.

Technology fortunes were the second-best performing on the ranking, with 55 billionaires adding $50 billion to their fortunes over the year, despite worries that a Trump presidency might introduce policies that could hurt their companies.

“I think we’ll have to see what the policies of the administration are,” Google co-founder Sergey Brin told the media gathered on the red carpet of the annual Breakthrough Prize gala in Silicon Valley in December. “I certainly hope they will be pro-science, pro-technology and all the things this world has really benefited from.”

Amazon.com Inc. founder Jeff Bezos, who doubled his fortune to $60 billion in 2015, led gains among technology executives again this year, rising $7.5 billion in 2016 on robust sales growth at the online retailer. He was followed by Facebook Inc. co-founder Mark Zuckerberg, who added $5.4 billion.

Some of the industry’s biggest relative gains went to the founders of the world’s leading startups, such as Uber Technologies Inc.’s Travis Kalanick and Snap Inc.’s Evan Spiegel. The so-called "unicorn" billionaires, which include Spotify Inc. co-founder Martin Lorentzon, who was identified as a billionaire for the first time in 2016, secured a series of mammoth funding rounds while moving closer to testing their fortunes on the public markets.

Most fortunes outside of the U.S. didn’t get the same boost from Trump’s victory, and were hurt by fluctuating commodities prices and the rise of the dollar, the currency used for the Bloomberg ranking. Nine of the 10 biggest decliners in 2016 were from outside the U.S., led by China’s second-richest person, Wang Jianlin, who lost $5.8 billion. Wang ended the year as the world’s 21st-richest person with $30.6 billion.

Nigeria’s Aliko Dangote, the richest person in Africa, lost $4.9 billion or one-third of his wealth as the combined effect of falling oil prices and the June devaluation of the naira pushed him to No. 112 with $10.4 billion. Dangote was the world’s 46th-richest person in June.

Saudi Arabia’s Prince Alwaleed Bin Talal Al Saud fell $4.9 billion, a 20 percent drop. Alwaleed said in November that all of his stakes in public companies including Citigroup Inc. are potentially for sale, reversing a longstanding policy that some of his most prized shareholdings were “forever.”

Wealth creation in China turned negative for the first time since the inception of the Bloomberg index five years ago, with the country’s richest losing $11 billion in 2016 amid a slump in the Shanghai Shenzhen CSI 300 index and a 7 percent decline for the yuan against the dollar.

Alibaba Group Holding Ltd. founder Jack Ma closed the year with $33.3 billion, adding $3.6 billion in 2016. He dropped in and out of his place as Asia’s richest person for the first four months of the year before claiming it for good in May after Alibaba’s finance affiliate, which is laying the groundwork for an initial public offering expected as soon as next year, completed a record $4.5 billion equity fundraising round.

China has 31 billionaires on the index with $262 billion, trailing the U.S., which has 179 billionaires who control $1.9 trillion, and Germany, whose 39 individuals have $281 billion. Russian billionaires also began to put the negative effects of U.S. and European sanctions behind them, reversing the combined $63 billion declines for 2014 and 2015 and adding $49 billion in 2016.

Wealth managers for the world’s richest are girding themselves for similarly frenetic start to 2017 as the seismic changes voters demanded this year start to take shape.

"Expect the unexpected," said Sabine Kaiser, founder of SKadvisory, which advises family offices on venture capital and private equity. "I don’t think family offices are overly concerned or getting too nervous but after Brexit and Trump they’ve resigned themselves to market volatility."