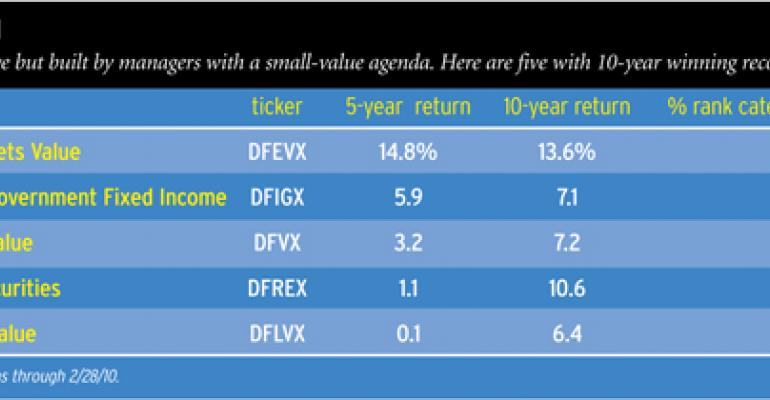 Oriented to Small and Value Stocks, DFA Has Rocked—and Attracted Assets. Will It Be a Victim of Its Own Success?

Dimensional Fund Advisors (DFA) is riding high. At a time when many investors are abandoning actively managed stock funds, DFA&#8217;s passive portfolios have been attracting a steady flow of cash.

Dimensional Fund Advisors (DFA) is riding high. At a time when many investors are abandoning actively managed stock funds, DFA’s passive portfolios have been attracting a steady flow of cash. Consider this statistic: The company oversees $115 billion in assets, up from $17 billion in 2002, according to Morningstar.

There is a simple explanation for such popularity—strong returns. Funds that finished in the top 10 percent of their categories for the past decade include, DFA Emerging Markets Value (DFEVX), DFA Large Cap Value (DFLVX) and DFA International Value (DFVX).

Can DFA continue its winning ways? Perhaps, perhaps not. The company has thrived during the past decade partly because market conditions have favored DFA’s style, which puts heavy weight on small and value stocks. If large growth stocks lead the parade in the next 10 years, then many DFA funds would lag.

Success Has Its Vulnerabilities
The growing success of DFA could also hurt results. After receiving an influx of money, many funds stagnate because it is difficult for large portfolios to trade nimbly. DFA is clearly concerned about size, because it has barred new investors from two of the most popular funds, DFA US Micro Cap (DFSCX) and DFA US Small Cap Value (DFSVX). That has left some advisors grumbling.

Still, DFA inspires intense devotion from many investors. The company has an aura of exclusivity because its funds are only sold through a limited number of financial advisors. The advisors must go through a training program and swear their commitment to passive investing. The extra burdens of selling DFA funds do not seem to detract from the company’s appeal. More advisors are signing up, hoping that access to DFA will attract clients.
DFA bases its strategies on research by leading academics, including Eugene Fama of the University of Chicago and Kenneth French of Dartmouth. Fama and French found that over long periods small stocks had outperformed large ones and value surpassed growth. To take advantage of the findings, DFA owns stocks that are smaller and cheaper than the holdings of competitors.
To appreciate why DFA funds have excelled, compare DFA US Large Cap Value (DFLVX) and a close competitor, Vanguard Value Index (VIVAX). During the ten years ending in February, the DFA fund returned 6.4 percent annually, compared to 2.2 percent for Vanguard.

The gap can be explained by the size and valuation of the portfolios. The stocks in the DFA fund have an average market capitalization of $21 billion, while the figure for the Vanguard fund is $38 billion. The DFA portfolio has a price-book multiple of 1.2, compared to 1.6 for Vanguard. In recent years, it paid to own stocks that were smaller and cheaper. For the decade, large growth funds lost 2.5 percent annually, while small value funds gained 9.1 percent.

While their returns have been favorable lately, the DFA funds often trail when small stocks lag. As markets collapsed in 2008, DFA US Large Cap Value lost 40.1 percent, lagging the Vanguard fund by 4 percentage points.
Because of the bias in DFA funds, periods of weak performance are inevitable, says Joni Clark, chief investment strategist of Loring Ward, a firm based in San Jose, California, that provides portfolio management for registered investment advisors. “Clients should understand that small-cap stocks can be out of favor for years,” says Clark.

Loring Ward designs a variety of portfolios that have most assets in DFA funds. The portfolios typically emphasize small and value stocks because those seem likely to produce the best long-term returns. But for clients with weak stomachs, the firm designs portfolios that are more balanced. “If clients cannot keep a long-term focus, than they may not be suited for portfolios with strong value tilts,” says Clark.

DFA is not equally strong in all categories, cautions Steven Evanson, owner of Evanson Asset Management, a registered investment advisor in Carmel, California. Evanson says that DFA shines in value-oriented categories. He favors funds such as DFA International Small Cap Value (DISVX). But for exposure to growth sectors, DFA does not have a clear edge over competitors. “In some sectors the returns from Vanguard funds are close enough to DFA that it doesn’t make much difference which company you take,” says Evanson.

DFA does not track a standard benchmark. Instead the company aims to provide a value-tilted exposure to an asset class. For DFA US Small Cap Value, the portfolio managers start with stocks that are among the smallest 10 percent of the market. Of those, the fund emphasizes stocks that account for the cheapest 25 percent of assets in the group. The final portfolio includes up to 1,600 names.

Instead of weighting holdings by market capitalization, the DFA portfolio managers emphasize those stocks that are easiest to trade. Say two stocks are both candidates for the small value fund. But one is expensive to trade because there is a wide spread between the bid and ask prices. To limit costs, the DFA manager would buy the cheaper stock and postpone bidding on the expensive one, perhaps waiting weeks or months until more favorable conditions appear.

Diehard proponents of traditional index funds question the DFA approach, saying that it fails to deliver a pure market exposure. But DFA fans say that the company’s approach provides more consistent results. Joni Clark prefers DFA to funds that track the Russell 2000 index, a small-cap benchmark. The Russell is reconstituted every 12 months, she says. Before the rebalancing occurs, some growing members of the index may leave the ranks of small caps and become mid-cap stocks. So investors are stuck holding mid caps until the Russell is reconstituted.

DFA shareholders do not face this style drift. As soon as a stock grows too big, portfolio managers begin thinking about dumping the shares. “With DFA you get a pure representation of an asset class, and you don’t have to worry about style drift,” says Clark.