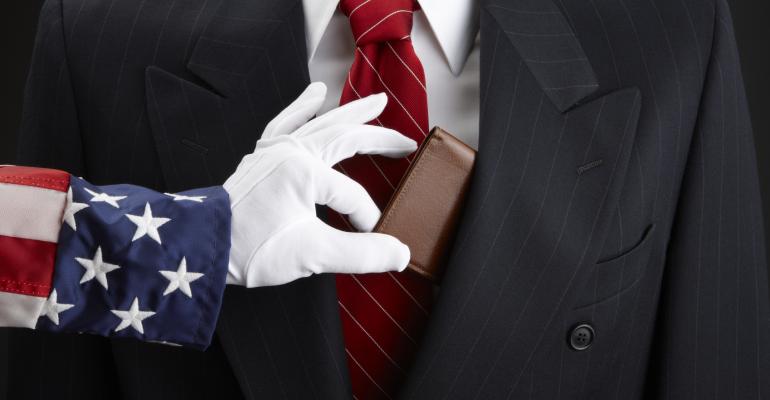 How CRE Investors Could Cash in On the Tax Bill

Many of the provisions passed will have a positive impact on investors by putting more money back into their pockets in terms of tax savings.

President Trump signed the new Tax Cuts and Jobs Bill on Dec. 22, effectively putting the final seal of approval on the most substantive tax law changes that the country has seen in 30 years.

It may take some time to crunch the numbers to determine just how much tax savings the new tax bill could generate for commercial real estate investors. The general view is that provisions specific to property owners and developers will deliver a net positive result—although not nearly the windfall that corporations will see with a drop in the tax rate from 35 percent to 21 percent.

Looking at the impacts all the way through the tax chain related to individuals, corporations and real estate, it is by far the most significant tax bill since the Tax Reform Act of 1986, notes Timothy Trifilo, a partner and national real estate tax leader at professional services firm CohnReznick.

Many of the provisions passed will have a positive impact on investors by putting more money back into their pockets in terms of tax savings, adds Michael Episcope, co-founder and principal at Origin Investments, a real estate investment firm that acquires primarily office and multifamily properties. Some of the changes to the tax treatment of capital expenditures, for example, will shield a tremendous amount of income for property owners that are making capital investments and improvements in properties, he says.

The industry is also looking at the potential ripple effects the new tax bill could create. On the positive side, many hope that the tax cuts will fuel economic and job growth that will drive demand for commercial real estate. “This stimulus package certainly could extend this cycle for another three, four or five years,” says Episcope. The promised “tax holiday” for offshore funds could provide an incentive to repatriate some of the estimated $2.5 to $3.0 trillion that is held outside the U.S., he notes. “If that finds its way back into the economy, that could very well spur demand in a lot of different areas,” he says.

On the negative side, it is worrisome that this tax bill could add nearly $1.5 trillion to the deficit over the long term. Another potential downside is if the tax bill contributes to higher inflation and a rise in interest rates, which would make borrowing more expensive for real estate investors.

Potentially, one of the biggest “wins” in the tax bill for real estate will be changes to the way pass-through income is taxed. The change would mainly apply to individuals and family trusts investing in real estate through partnership entities, such as LLPs and private equity funds, as well as individuals who receive income from REIT dividends.

Owners of pass-through entities may be eligible to claim a 20 percent deduction for business-related income. For example, if an LLP owns an office building that provides $200,000 in annual income to its investor partners, those individual investors could avoid paying taxes on $40,000 of that income if they are eligible for the full 20 percent deduction.

The intent behind that deduction was to encourage corporations to create jobs. However, it also applies to invested capital, which opens the door for real estate investors to benefit from that deduction, according to Jeff Bilsky, technical practice leader in the national tax office partnership group of accounting firm BDO.

The tax bill preserves the 1031 tax-deferred exchange rules that allow investors to defer capital gains on the sale of a property by reinvesting proceeds into another qualifying “like-kind” property. One key change in the new tax bill is that the 1031 exchange can only be used to defer capital gains on the value of real estate property and excludes any value on personal property.

That exclusion will have a negative tax impact on real estate assets that also contain a high amount of personal property, such as restaurants that have significant value tied up in the furniture, fixtures and equipment. “Where as in the past we were able to exchange the full amount, there may now be some tax leakage,” says Bilsky.

Carried interest tax law has been under fire for more than a decade. Some view current carried interest tax laws as a loophole for hedge fund managers, allowing them to be taxed at lower capital gains rates rather than ordinary income rates. What ultimately passed as part of the new tax framework was a moderate provision that changes the hold period to qualify for the capital gains rate from one year to at least three years.

The focus on carried interest has been of particular importance for private equity general partners and sponsors who received a bigger share of returns as “waterfalls” or incentive pay for exceeding performance targets. In the real estate context, the change doesn’t make much difference to investors who have a long-term hold strategy. However, there are a lot of transactions in the private equity world where appreciation is generated very quickly and assets may be sold before a three-year hold period has ended. The change could also affect real estate investors who operate on a fix-and-flip strategy.

Another important aspect of the bill is that it maintains the status quo for low income housing tax credits, as well as historic preservation and rehabilitation credits. “That is a positive for those segments of the real estate industry, and I would say that also is important from a socio-economic perspective, because a significant portion of the low-income housing development world is really tax-motivated,” says Trifilo. Change in Depreciation Schedules

Businesses will be able to immediately expense the purchase of an asset. On the one hand, the quick cost recovery is a positive, because an investor is deducting an expense rather than recognizing taxable income, notes Bilsky. However, it could be a potential negative for REITs that are making distributions based on taxable income. REITs need to be able to manage their cash flow and a spike created by a 100 percent deduction in year one versus zero the next year could create some pressure from a cash management perspective, he adds.

It remains to be seen whether changes to tax treatment could influence how real estate ownership entities are structured going forward. The corporate tax rate will drop significantly from 35 percent to 21 percent. In comparison, an investor that qualifies for the full deduction on income from a pass-through entity will effectively see the tax rate drop from 39.6 percent to 29.6 percent. That raises two questions. One: should taxpayers consider forming a corporation rather than a partnership entity? And two: do the new tax rates make it more desirable to convert from a corporation to a partnership or vice versa, notes Bilsky.

The answers depend on more than just the tax rate. Ownership entities also need to consider other factors, such as how their cash flow is treated. Is it distributed as income to investors, or is the cash flow reinvested into assets until the time of a sale? For those entities that are frequently pulling out cash, pass-through entities, such as LLPs, may not be the most efficient structure. There are also some limitations that may make it difficult for investors to get down to the lowest 29.6 percent pass-through tax rate, adds Bilsky.

To some extent, it may be too soon to tell how some of the different rules will play out. “There are a number of provisions where, realistically, we are going to need some more clarity,” Bilsky says. Added to that, most of the provisions do have a “sunset,” meaning they are not permanent and would either expire in 10 years or need to be extended by Congress. The fact that there is an end-date in sight also ensures that a shift in power in Congress in the next election is not likely to spark a battle to roll-back the new tax laws in a few short years, Bilsky adds.