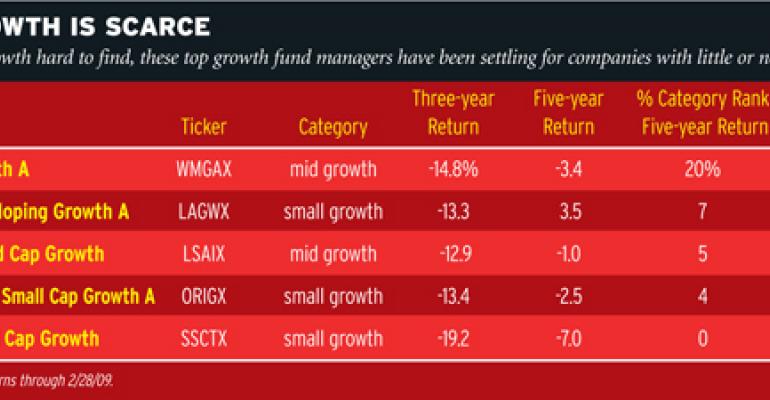 You Call That Growth?

Some classic growth funds are moving toward the value box&#8212;out of necessity. Should you dump a fund that modifies its approach?

To find growth stocks, Philip Fine runs a simple screen every Monday. The program looks for mid-cap companies that are reporting annual earnings gains in the mid teens or higher. Fine, who is portfolio manager of Loomis Sayles Mid Cap Growth Fund (LSAIX), says that a year ago his screens routinely spotted 150 candidates. But on a Monday in March, only 18 names passed the growth hurdle. “The sandbox where I can play is shrinking,” says Fine.

For years, the goal of growth managers was straightforward: Find stocks with growing earnings. But these days, few companies are reporting much growth in profits. That has left managers scrambling. To fill their portfolios, some funds are taking former growth companies that now face shrinking earnings. Other managers have shifted gears, moving away from technology and health — traditional growth sectors — and instead buying precious metals and stocks that may help to preserve assets if the market goes into a freefall.

In today's difficult environment, advisors need to pay close attention to long-time fund holdings. Be aware that some classic growth funds may be moving toward the value box. Should you dump a fund that modifies its approach? Maybe not. “You shouldn't necessarily sell a fund just because it is making temporary adjustments to deal with the headwinds that we are all facing,” says Jacob Wolkowitz, an investment analyst for Accredited Investors, a registered investment advisor in Edina, Minnesota.

The Need To Play Defense

Among those top managers who are making adjustments is Philip Fine of Loomis Sayles. Over the years, Fine has typically favored companies that could report earnings gains of 20 percent for the next year. Now only 10 of the 55 stocks in his portfolio meet the old test. Instead of focusing on the few companies that are still growing rapidly, Fine has changed his strategy to include two distinct groups of stocks, defensive names that can stay afloat in hard times and cyclical shares that will rebound hard when the economy recovers.

A defensive holding is C.R. Bard (BCR), a maker of medical devices that increased earnings 16 percent last year. For extra protection, Fine has added gold miners, including Agnico-Eagle (AEM). A cyclical stock that would benefit from a revival of manufacturing is copper producer Freeport-McMoRan (FCX). Why own such different kinds of stocks? “There are so many straws in the wind now that it is hard to have a strong conviction about where the portfolio should be,” says Fine.

Another fund that has changed direction is RidgeWorth Small Cap Growth (SSCTX). Portfolio manager Chris Guinther has long sought to buy companies that will beat Wall Street's earnings estimates. To do that in the past, he typically bought companies that were gaining market share and growing faster than the consensus expected. Now Guinther is taking some companies that will surprise because the earnings expectations have been set too low.

A favorite holding is AutoNation (AN), which owns 300 dealerships. Like all companies tied to Detroit, the company has faced hard times. But Guinther figures that the public company will eventually prosper by taking market share from local dealers. “The bar has been set so low that it will only take a small improvement to push the stock up,” he says.

In the past, Pioneer Oak Ridge Small Cap Growth (ORIGX) sought consistent performers. Many holdings had been growing at 15 percent annual rates for three consecutive years. But these days portfolio manager Robert McVicker is settling for companies with little or no growth. “We are looking for companies that can grow steadily after the economy recovers,” McVicker says.

Pioneer favors companies with little debt that are taking market share away from competitors. By sticking with solid businesses, McVicker avoided some of the worst damage recently and outdid 97 percent of his competitors in the past year.

A favorite holding is Waste Connections (WCN), which hauls garbage and runs landfills in Western states. The company's sales could drop during the recession, but McVicker figures that the waste hauler will remain on sound footing because people always take out the trash.

Ivy Mid Cap Growth (WMGAX) has long focused on finding stocks with growth rates in the mid teens that sell at reasonable prices. Lately portfolio manager Kimberly Scott has been taking companies that seem positioned to resume expansion when the recession ends. A favorite holding is Bed Bath & Beyond (BBBY). With consumer sales slumping, the retailer is suffering, but Scott forsees better days. “They will survive in fine shape because some of their key competitors will close,” says Scott.

Lord Abbett Developing Growth (LAGWX) looks for high-quality small stocks that have the potential to grow into midcap stars. In the past, portfolio manager Thomas O'Halloran looked for companies that were growing at annual rates of at least 12 percent. These days he is accepting slower growers, but the approach remains largely unchanged. “We want best-of-breed companies with good business models,” says O'Halloran.

Lord Abbett will accept above-average prices to buy the stars. If a company is likely to grow at a 20 percent rate over the next three years, then O'Halloran is willing to pay a price-earnings ratio of more than 20. To find companies with the potential for fast growth, he focuses on industries that seem to have the wind at their backs, such as alternative energy.

A favorite holding is NetSuite (N), which offers a complete range of business software for small companies. Customers can rent what they need for accounting and e-commerce. Sales have been steady because the software enables customers to cut costs.

Seeking stocks that can grow during the recession, O'Halloran has been buying education companies lately. “Private education is a good industry because there is a clear relationship between the skills that you have and the compensation that you receive,” he says.

O'Halloran owns Strayer Education (STRA), which provides online and classroom courses for adults. Students earn degrees in information technology and accounting. Enrollment is 45,000, up 22 percent from a year ago. Revenues should grow this year as the company opens new campuses and demand remains strong.