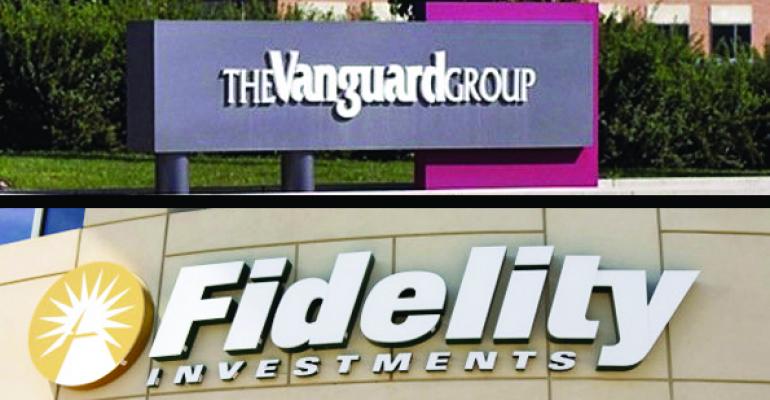 After 16 years as the largest target-date fund provider, Fidelity Investments has lost its crown to Vanguard, which now holds 27 percent of the market share, according to a new Morningstar report.

Fidelity, which had net outflows of about $7.7 billion last year from its target-date strategies, holds 26.5 percent of the market. T. Rowe Price has 17 percent market share, Morningstar says.

“Vanguard has come out ahead due to strong inflows, but also because of Fidelity’s steady outflows,” Morningstar writes in the report. “On an absolute basis, Fidelity lost the most assets by far in 2014.”

While Fidelity attracted about $1.8 billion to its passive target-date funds last year, it had outflows of nearly $9.6 billion in its active target-date funds, representing outflows of about 4 percent of assets. That compares to Vanguard, which drew more than $14 billion in net new assets last year, bringing its total target-date assets to $193 billion, a growth rate of 9 percent. T. Rowe Price also gathered $14 billion in net new assets, with its total target-date asset base at $122 billion, a growth rate of 14 percent.

Vanguard, Fidelity and T. Rowe Price account for 71 percent of the target-date fund market, which Morningstar attributes to their widely used record-keeping businesses. But that share has been declining. Last year, the three fund managers made up about 73 percent of the market, and in 2009, they held 77 percent.

“Fast up-and-comers include JPMorgan and American Funds, though both still have market shares that hover in the low single digits,” Morningstar writes.

Overall, target-date mutual funds made up 30 percent of the net new inflows to fund companies in 2014 and 8 percent of mutual fund assets, Morningstar found.

“True, the years of consistent double digit organic growth have passed, but on average, new monies into target-date fund still represent almost a third of their fund companies’ net new flows,” Morningstar writes. “The steady stream has been especially crucial to active managers, many of which would otherwise be in outflow territory.”