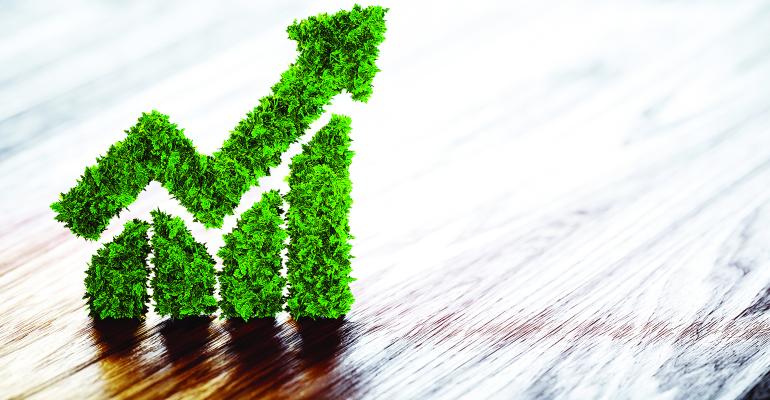 Is the “Trump Bump” in SRI Sustainable?

Choosing companies to invest in based on the impact of their environmental, social or corporate governance (ESG) factors, whether you call it impact investing or socially responsible investing (SRI), is clearly the “strategy du jour” among portfolio managers.

You can track the popularity in the numbers: In 2016, 1,002 funds, with $2.6 trillion in assets, incorporated ESG criteria into their investment decision making, up from $1.01 trillion in 2012, according to the 2016 report from the U.S. SIF Foundation: The Forum for Sustainable and Responsible Investment.

Related: The Robos Are Getting Socially Responsible

In 2016, 36 mutual funds with SRI mandates were launched in the U.S., a 38 percent increase over 2015. Inflows to the space far outpaced new fund launches: Investors poured $5.8 billion into SRI strategies in 2016, almost three times as much as they did in 2015, according to Morningstar.

That mismatch between new launches (up 38 percent) and investor demand (flows up 300 percent), however, is partially explained by concern over the social impact of the Donald Trump presidency. Consider that three-fourths of the 2016 inflows came in the month of December, just after the election, presumably by affluent investors, largely not Trump’s base. In the first four months of 2017, another $2.5 billion poured in, putting this year on track for almost $8 billion of new investor money. Without that December influx, new money into SRI would actually have decreased last year from the year before.

“The political climate has buttressed interest in sustainable investing in a way we would not have imagined prior to the election,” says Joe Keefe, president and CEO of Pax World Management, which launched the first socially responsible mutual fund in the U.S. in 1971, a year after the first Earth Day.

It remains to be seen if the new money flowing into these funds can continue at the same pace. Regardless, even before the election, several large asset managers, convinced of a growing demand from investors, launched dozens of new funds. Firms such as Morgan Stanley, Blackrock, JPMorgan and Fidelity have all launched funds, following in the footsteps of boutique managers who in many cases have been running impact strategies for decades.

“We’re seeing one to three new funds every single month,” says Joe Sinha, head of sales and marketing at Parnassus Investments, which had almost $24 billion in assets under management in six funds as of March 31. “Everybody is launching. It’s a little like the tech craze of 1999,” he says.

Combine the potential one-time spike in investor demand with the rush of new funds coming into the market, and it’s fair to ask if the pace of sustainable investing is itself sustainable.

“The market is not saturated,” says Keefe. “These are long-term secular trends; they’re not going away. Companies over the long term are going to have to contend with issues like climate-change risk and gender diversity on boards and in corporate management. The space will continue to grow.”

Born in the 1970s, the strategies were originally simple negative screens, keeping investor money away from “bad” companies, used by hippie investors trying to save the world or by faithful investors unwilling to defy their religious convictions while participating in the earth-bound world of capitalism.

Today, sophisticated analysis of non-financial ESG factors help guide portfolio managers looking for an investment edge. Giant data sets kept by firms like Morningstar or MSCI “score” every company on multiple non-financial factors, allowing managers to incorporate an “impact” thesis for a portfolio that aligns with a broader social mission. After all, when energy companies hasten global warming it’s not only bad for the environment, it’s also bad business for the company (at least in the long term). ESG investors, increasingly, see little difference between investing for impact and investing for profit.

Amy Domini, founder and CEO of Domini Social Investments, which launched its first fund in 1991 and now has three funds with $1.6 billion in assets, says that not only are these issues here to stay, but she agrees that in the current political environment some clients see their investments as a more potent way to impact society than traditional political action.

“Now more than ever if you care about climate change or public schools being free and available and excellent for every child, you’re sort of shut out of the conventional paths like government, and it makes our job more difficult, but more urgent,” she says.

Keefe says sustainable investors were hoping for an administration that wanted to create a level playing field between, for example, renewable energy and fossil-fuel-based energy, through a carbon tax or another mechanism. “But the political climate is not right for that,” he says. “People think they can do more through the private sector than through the public sector.”

Even before the election, the trends toward SRI were encouraging to industry giants like Fidelity and Morgan Stanley. On May 15, Fidelity launched its first two sustainability-focused index funds, adding to an ESG lineup that includes an actively managed mutual fund—Fidelity Select Environment & Alternative Energy Portfolio—and Fidelity's FundsNetwork program, which gives investors access to more than 100 ESG funds.

On May 17, Morgan Stanley announced that it had raised more than $125 million in commitments for its first global impact fund, PMF Integro Fund I. It will invest in private-equity funds that engage in socially responsible investing.

“It’ll be interesting to see how the market responds,” says Sinha. “People come to ESG because of their values. Does Morgan Stanley stand for environmental, social and governance concepts? That might be a tough sale.”

The fact that Fidelity is now among the believers carries great weight, as far as Domini is concerned. “Fidelity entering the field is probably the single most dramatic development” she says. “It’s an indication of the coming of age of our field. Their sophistication and capacity to watch trends is enormous. But for them it was always, ‘Why bother? It’s not enough of a market for us to fuss with.’”

Even though some of the new funds have names like Fidelity and Morgan Stanley behind them, what investors most want to see is a track record. Many advisors won’t invest in a fund without at least three years of a performance record, and if a fund hasn’t proven itself in that timeframe, there likely will be
a shakeout.

“A great many of the new entities are selling on back-tested performance, a less-than-real performance,” says Domini. “That doesn’t fly with most advisors. There could be a bang coming in three years.”

Of course, fund closures don’t discredit the strategies. Pax closed a few funds that were, ironically, victims of the growing popularity of ESG investing. “They were asset allocation funds we launched with Morningstar,” he says. “We created funds that were one-stop shopping, perfect for advisors or retirement plans that may have gotten a request for an ESG fund.”

Those funds launched seven years ago, and in the interim, the proliferation of platforms and funds emerged offering a host of targeted ESG strategies. The one-stop, plain-vanilla notion did not catch on. Since then, Pax has launched funds with more-defined strategies.

“There are some products that don’t succeed,” says Keefe, “but more often than not an increase in offerings and strategies is in response to the investing public demanding it.”