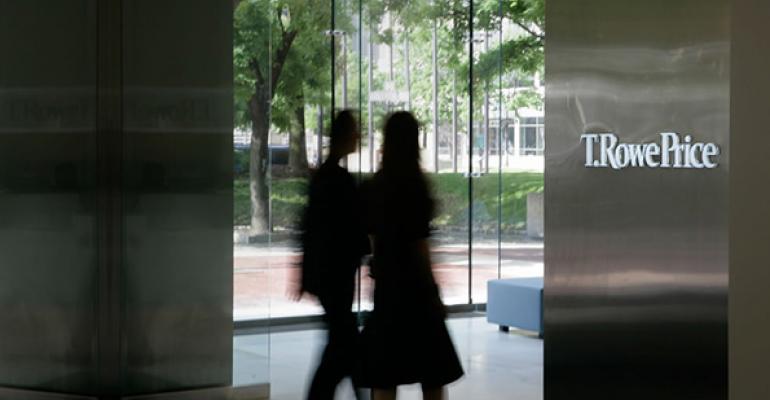 “Over a market cycle, we’ll put up our results against passive any day of the week,” CEO William Stromberg says.

(Bloomberg) --William Stromberg is ready to take on the naysayers.

Even as investors continue to abandon actively managed mutual funds, the chief executive of T. Rowe Price Group Inc. is doubling down on stock picking. Stromberg, armed with a record that shows that the majority of the company’s funds outperform indexes even after charging higher fees, is taking steps from bolstering advertising to adding new products to lure clients.

“Over a market cycle, we’ll put up our results against passive any day of the week,” Stromberg said in an interview.

Stromberg is doing more than boast. He plans to expand the Baltimore-based firm’s distribution outside the U.S., create funds that invest in multiple asset classes and add data scientists to supplement the fundamental research the company has relied on for 80 years.

Challenging indexers will be a mighty effort. Investors have pulled $444 billion from funds run by stock pickers in the last 17 months while adding about $575 billion to mutual and exchange-traded funds tracking indexes.

“ T. Rowe Price is a fine organization, but the forces of nature are lined up against them,” said Michael Rosen, chief investment officer of Angeles Investment Advisors in Los Angeles, which oversees about $25 billion in passive and active strategies. “I’m not sure the argument will resonate.”

T. Rowe Price hasn’t been immune from the shift to indexing. The company had $2.8 billion in net redemptions in 2016 after two years of modest inflows. Over the past five years the firm attracted a total of $7.7 billion in deposits. To put that in perspective, Vanguard Group Inc., known for its low-cost index products, has gathered about that much money each week this year. T. Rowe Price shares rose 9.6 percent over the past 12 months as of June 27 compared with a gain of 39 percent for the S&P index of asset managers and custody banks.

The company is vulnerable to further outflows and will have to spend more money “just to tread water, much less grow,” UBS analyst Brennan Hawken said in a May report in which he cut the rating on the stock to sell.

Stromberg thinks the firm’s record versus passive as well as larger rivals is a big advantage. On average, T. Rowe’s stock funds beat 75 percent of peers over the past decade, compared with 63 percent for Capital Group and 51 percent for Fidelity Investments, according to data compiled by Morningstar Inc. Fidelity and Capital Group, both known for their equity funds, manage $2.3 trillion and $1.5 trillion, respectively. T. Rowe has specialized in picking stocks since it was founded in 1937 by Thomas Rowe Price Jr., an investor who favored growth companies. The firm still emphasizes fundamental research and hires money managers who often spend their whole careers there.

Stromberg, 57, once a star football player for Johns Hopkins University in Baltimore, fits that profile. He has been at the company for 30 years -- as an analyst, portfolio manager and executive.

In a 2016 study, the company found that a majority of its 18 U.S. equity strategies beat their index benchmarks across multiple time periods over 20 years. Some of the funds topped their benchmarks by a wide margin.

The firm’s biggest fund, the $51 billion T. Rowe Price Growth Stock Fund, beat the S&P 500 Index over five years and 10 years. The $20 billion New Horizons Fund beat the Russell 2000 Growth Index by roughly 4 percentage points a year over 20 years, according to data compiled by Bloomberg. The $28 billion Mid-Cap Growth Fund exceeded its benchmark by 3 percentage points a year over the same period.

Most of the firm’s biggest stock funds charge between 70 and 80 cents per $100 invested. Many index funds and ETFs charge about 5 cents. Making an analogy between mutual funds and hotels, Robert Sharps, T. Rowe Price’s co-head of global equities, said, “If we can deliver a better experience, we should be able to charge a higher price.” Performance is calculated net of fees.

New spending initiatives are aimed at making T. Rowe Price more competitive and attracting flows. By beefing up its distribution in Europe, the company is hoping to tap into a bigger pool of investors. Currently only 5 percent of assets come from outside the U.S.

The new products will focus on providing income using a mix of asset classes, said Stromberg. One fund, which opened this week, is a variation on T. Rowe Price’s target-date retirement series. Called Retirement Income 2020, it will allow investors to receive regular monthly distributions after they retire.

Like other money managers, including BlackRock Inc. and Tudor Investment Corp., the hedge fund run by Paul Tudor Jones, T. Rowe Price believes it needs to improve its technology skills to keep up with competitors. Its technology center, which opened this year in New York, expects to have 50 to 60 people with expertise in fields such as big data and machine learning.

“This isn’t a replacement for fundamental research,” said Nigel Faulkner, head of technology, who joined in 2015 from Credit Suisse Group AG. “We want to use technology to find alpha,” or outperformance.

Another area slated for a 10 percent spending hike this year is advertising and promotion.

“We’ve been a quiet firm,” said Stromberg. “Our feeling was that if we deliver terrific results that would carry the day.”

With the advocates for passive investing pressing their case so forcefully, said Stromberg, it may be time for T. Rowe Price to raise its voice.

“We may have to be more active in defense of active management,” he said.