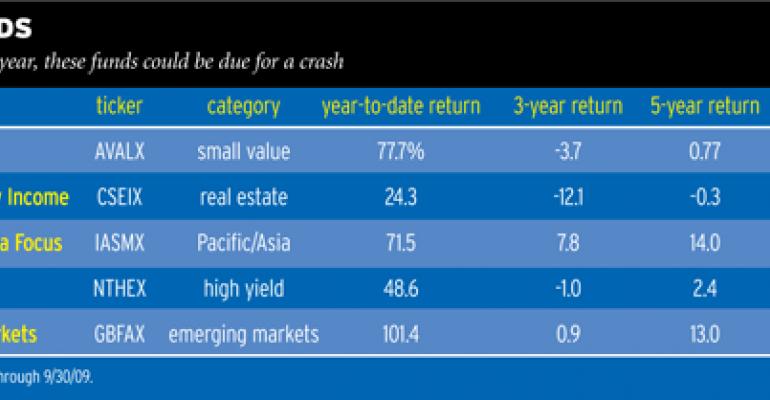 Mutual Funds to Sell or Avoid

While the markets may be buoyant, this is a time for caution. Some funds now seem richly valued as suggested by dividend yields and price-earnings ratios. Investors should be wary, underweighting the pricey funds described below&mdash;or staying away altogether. Here are five funds (and sectors) to avoid.

While the markets may be buoyant, this is a time for caution. Some funds now seem richly valued as suggested by dividend yields and price-earnings ratios. Investors should be wary, underweighting the pricey funds described below—or staying away altogether.


Real Estate. Real estate funds have enjoyed a nice recovery. For example, Cohen & Steers Realty Income (CSEIX) climbed 24.3 percent during the first nine months of 2009, according to Morningstar. Real Estate funds typically invest in real estate investment trusts (REITs), companies that hold portfolios of properties. When it became clear that most major REITs would survive the downturn, investors breathed a sigh of relief last spring and began bidding up share prices. Now the stocks no longer look like bargains, says Andrew Gogerty, a Morningstar analyst. “The case for real estate funds is not as compelling as it once was,” says Gogerty.

As stock prices climb, dividend yields fall; the yields on REITs now seem skimpy, an indicator that the sector may be overvalued. In September, REITs yielded 4.89 percent, down from 6.75 percent in June, according to the National Association of Real Estate Investment Trusts. A year ago, REITs yielded 5.78 percent, 200 basis points more than 10-year Treasuries. Now the spread with Treasuries has declined to 130 points, below the historical average.

The rich prices could be justified if the industry seemed poised to boom, but the outlook for the next several years is hardly promising. At a time when occupancy rates and rents are falling, property prices continue to soften. With lenders cautious, acquirers cannot finance new purchases.

To be sure, some advisors will continue to hold real estate for diversification. But in recent years, REITs have tended to correlate more with the stock market. REITs typically decline when the market is falling, says Michele Gambera, chief economist of Ibbotson Associates. “REITs have a high correlation with small value stocks,” says Gambera.

Emerging markets. Among the hottest performers this year have been emerging markets funds, which returned 61.3 percent during the first nine months of 2009. Top finishers included Van Eck Emerging Markets (GBFAX), which climbed 101.4 percent, and Lazard Developing Markets (LDMOX), with a return of 87.6 percent.

As shares climbed, price/earnings multiples have risen. Portfolios of Latin America funds now have an average p/e multiple of 9.69, only a bit lower than European funds, which have a multiple of 10.46. Meanwhile, Pacific/Asian funds have a multiple of 13.86. That is very different from years past when emerging markets nearly always had multiples that were substantially lower than the figures in the developed world.

Bulls contend that stocks should be more expensive in emerging markets than in the developed world. For starters, the emerging world is not troubled by the loan problems that hobble banks in the U.S. and U.K. And at a time when American shoppers are pulling back, consumers in the developing world are rushing to buy cell phones and TVs. What’s more, the population is growing rapidly in many emerging markets. That could boost the emerging economies in an era when Japan and Europe may show little or no population growth.

Even if the bullish forecasts prove correct, the emerging world remains a risky place where markets collapse periodically. In 2008, emerging funds lost 54.4 percent, 17 percentage points more than the S&P 500. The extra volatility is likely to continue because many emerging markets are small. When times are rosy, cash flows into the markets, driving stocks to unsustainable heights. The money departs just as fast in downturns. To appreciate the risk, consider standard deviation, a measure of how much an investment bounces up and down from its mean. The S&P 500 has a standard deviation of 19, compared to a figure of 33 for emerging markets funds.

Some investors may want to hold emerging market funds because they can provide diversification, says Ibbotson’s Gambera. But he suggests moving cautiously. “We are not advocating that investors take a major position,” he says. “At most, you may want to put 2.5 percent to 5 percent of assets in emerging markets.”

Micro-cap funds. Like emerging markets, microcap stocks are relatively illiquid investments that sank in the downturn and then soared. Among the winners has been Aegis Value (AVALX), which returned 77.7 percent during the first nine months of this year. Investors who are considering buying the fund should be aware that Aegis lost 51.4 percent in 2008.

The small size helps to explain why micro-caps are so volatile. The funds can crash any time withdrawals occur. That happened last year when investors fled to the safety of Treasuries, dumping micro-caps and other risky assets.
With a standard deviation of 36, Aegis Value ranks as an aggressive choice. The fund alternates between landing in the top and bottom quartiles of the small value category. After finishing in the bottom 1 percent of the category in 2008, the fund finished in the top 1 percent this year.

High-yield bonds. Junk funds have enjoyed one of the greatest rallies ever recorded by a fixed-income category, rising 38.9 percent during the first nine months of 2009. Among the top performers was Northeast Investors (NTHEX), which returned 48.6 percent.

As credit markets froze, investors refused to buy junk bonds unless they provided huge yields. But then as the panic subsided, prices climbed and yields plummeted. The yield on the Merrill Lynch High Yield 100 index is currently 8.2 percent, down from the 52-week high of 17.0 percent.

Whether or not high-yield bonds represent a bargain depends heavily on defaults. A spurt in defaults can wipe out returns. The default rate for the 12 months ending in September was 12.0 percent, according to Moody’s. A year from now the rate should fall to 4.5 percent, Moody’s says. If the Moody’s forecast is correct, junk bonds could provide a return roughly equal to their yield. That would be a decent outcome in a difficult market. But if default rates remain persistently high, then investors in junk bond funds could be badly disappointed.