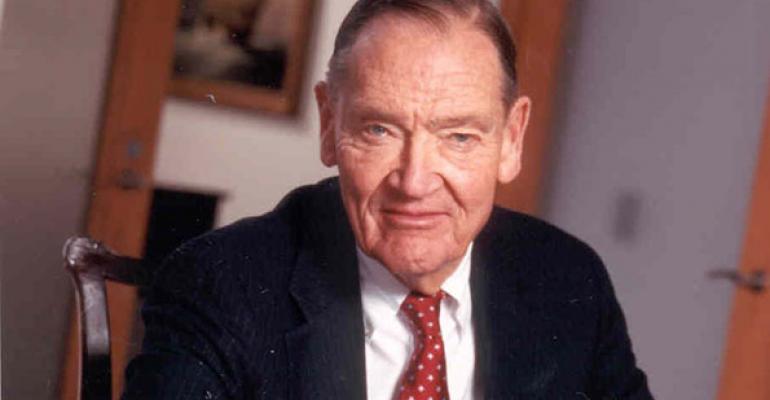 How Index Funds Won the Battle for Acceptance

(Bloomberg View) -- Forty years ago last week, Vanguard’s John Bogle created the first index mutual fund, offering investors a guarantee: They would never outperform the market, but nor would they underperform it. The Index Investment Trust (now the Vanguard 500 Index Fund) simply tracked the performance of the S&P 500.

Index funds are now a huge business, accounting for trillions of dollars of mutual fund money. And with good reason: Even though their returns are utterly average, their minimal fees bring big savings for investors, allowing them to outperform actively managed funds over the long term.

Bogle deserves a huge amount of credit for this. But as he has acknowledged, the real story of index funds begins far earlier than Vanguard’s entry into the retail market in 1976.

The idea of an index fund appeared in 1960, when the University of California economist Edward Renshaw co-authored a paper, “The Case for an Unmanaged Investment Company,” with an MBA student, Paul Feldstein, for the Financial Analysts Journal. It anticipated many of the ideas that would animate the first index funds.

Renshaw and Feldstein examined the investment landscape and noted that the number of mutual fund options was growing at a staggering rate. Yet many of these funds, they observed, failed to outperform the Dow Jones Industrial Average. Given that retail investors were ill-equipped to determine which actively managed fund would do better than average, why not just aim for average?

Moreover, they noted, “real economies in supervision could be obtained by eliminating the cost of advisory service.” In time, this could translate to superior returns over actively managed stock portfolios. In a few short pages, they laid out a clear case for an unmanaged stock fund that tracked an index.

And no one listened. Well, almost no one. As my fellow Bloomberg View columnist Justin Fox recounted in "The Myth of the Rational Market," a few months after the Renshaw and Feldstein article, another article appeared in the same journal titled “The Case for Mutual Fund Management.” The “unmanaged fund,” the author sniffed, might “superficially appear” to be a sophisticated idea, but it was doomed to fail, given the technical obstacles to tracking an index in real time – it was hard to do without incurring significant transaction costs.

The author of this attack was one John B. Armstrong. But this was a pseudonym. Armstrong’s real name was John C. Bogle, then working for the actively managed Wellington Fund.

Despite the attack, the idea continued to draw interest. It was pursued by John Andrew “Mac” McQuown, a mechanical engineer who was among the first to harness computers to crunch data on stocks. He ended up working at Wells Fargo in the 1960s, heading up the “Investment Decision Making Project.” His group attracted a coterie of renegade financial theorists associated directly or indirectly with the University of Chicago. They included Eugene Fama, who first articulated the Efficient Markets Hypothesis; as well as Robert Merton, Fischer Black and Myron Scholes, who revolutionized options pricing.

This group eventually undertook a study of pension fund performance that led McQuown to consider whether there was a way to create a passive fund that simply mimicked the market. Yet as the index fund concept took shape, it attracted enormous controversy within Wells Fargo. In an interview published by the University of Chicago, McQuown recalled one skeptic who said: “This cannot possibly be right. We spend all this money on analysts and all this fancy stuff and you’re saying that all we really need to do is buy the S&P 500?”

As McQuown’s team hammered out ways of tracking the index without incurring heavy fees, another University of Chicago professor, Keith Shwayder, approached the team at Wells Fargo in the hopes they could create a portfolio that tracked the entire market. This wasn’t academic: Shwayder was part of the family that owned Samsonite Luggage, and he wanted to put $6 million of the company’s pension assets in a new index fund.

This was 1971. At first, the team at Wells Fargo crafted a fund that tracked all stocks traded on the New York Stock Exchange. This proved impractical -- “a nightmare,” one team member later recalled -- and eventually they created a fund that simply tracked the Standard & Poor's 500. Two other institutional index funds popped up around this time: Batterymarch Financial Management; American National Bank. These other companies helped promote the idea of sampling: holding a selection of representative stocks in a particular index rather than every single stock.

These early ventures met with success, attracting new institutional investors. One of the biggest converts was AT&T. It company ran extensive reviews of its pension fund managers, and found that only 20 percent of them outperformed the S&P 500. This revelation prompted them to shift $120 million into the three existing index funds. At the same time, Ford and Exxon began shifting money into internal index funds that these corporations created and administered.

The rise of the index funds started to stir fears on Wall Street. One unnamed securities analyst working for a Boston bank was quoted in November 1975: “I hope the damn things fail because if they don’t, it’s going to mean the jobs of a lot of good analysts and portfolio men.”