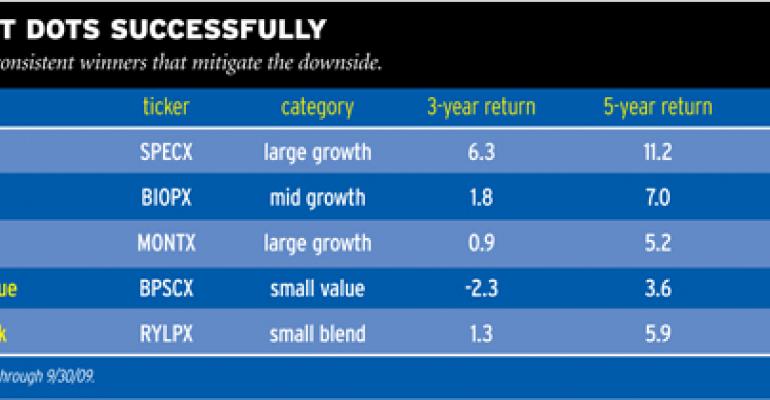 Should you stay well away from hot dots, that is, hot mutual funds? Not necessarily. Some top funds have long records for delivering relatively steady results. The best choices among the winners are diversified funds that can produce strong performances in good times and limit losses in downturns. By swapping your weaker holdings for one of the more consistent funds, you may be able to improve results in up and down markets.

After markets started to rally in March, many kinds of mutual funds soared. Among the leaders for the first nine months of 2009 were Latin American funds, which returned 86.6 percent, according to Morningstar. Technology funds climbed more than 49.5 percent, while the S&P 500 rose 19.3 percent.

Seeing such results, some investors may consider racing to buy the red-hot funds. But all too often, chasing the market leaders can be a recipe for disaster.

One of the most dramatic examples of overshooting occurred during the 12 months ending in October 2007. With investors enamored of everything Chinese, Asian funds climbed. Then in November, the top performers began falling off a cliff. After returning 137 percent in one year, Matthews China (MCHFX) lost 59.5 percent during the 12 months ending in October 2008. Eaton Vance Greater China Growth (EVCGX) returned 124 percent before losing 60.8 percent.

Should you stay well away from hot dots? Not necessarily. Some top funds have long records for delivering relatively steady results. The best choices among the winners are diversified funds that can produce strong performances in good times and limit losses in downturns. By swapping your weaker holdings for one of the more consistent funds, you may be able to improve results in up and down markets.

If you seek an aggressive growth choice that won’t collapse in hard times, consider Alger Spectra, which returned 45.1 percent during the first nine months of this year. In bull market years—such as 2007 and 1999—Alger finished in the top quintile of its group. The fund lagged during downturns, but rarely landed in the bottom quintile. Producing relatively consistent results, Alger outdid 99 percent of its competitors during the past five years.

Portfolio manager Patrick Kelly likes dominant companies that are expanding their market share and increasing the growth rate of units sold. A favorite holding is Google. “It continues to take market share,” says Kelly. “We believe that ultimately Internet advertising will be larger than network TV advertising.”

Kelly also holds Microsoft. He says that sales of personal computers will grow faster than Wall Street expects in the next several years. That will drive growing sales of Windows 7, Microsoft’s new operating system.
Another high-octane large-growth choice is Monetta (MONTX), which returned 43.3 percent during the first nine months of 2008. Portfolio manager Robert Bacarella wants stocks that seem to have the wind at their backs. His ideal stock is climbing on strong volume, while Wall Street analysts applaud the outlook for sales and earnings.

Last year presented problems for Bacarella. With so many companies sinking, it was hard to find stocks with upward momentum. Unable to select rising shares, Bacarella began focusing on resilient stocks that were falling less than their competitors. Eliminating the weakest names, Bacarella pared his portfolio from 130 names down to 50. Big holdings included growth champions, such as Apple and Petroleo Brasileiro, the Brazilian oil giant. “By the bottom of the market, I had only a small group of solid companies,” he says. “When the market rebounded, many of my stocks really shot up.”

For a steady mid-cap growth choice, consider Baron iOpportunity (BIOPX), which climbed 49 percent during the first nine months of 2009. Portfolio manager Michael Lippert seeks companies that are using innovative technology to grow. Wary of hardware producers that can face stiff competition, Lippert prefers companies that can grow rapidly because of sustainable advantages. “We want stocks that can double in four or five years,” he says.

A holding is Lamar Advertising, a company that has been boosting its revenues by introducing electronic billboards. To use these, advertisers upload images on a website. The electronic systems can be much more profitable than traditional billboards. While a conventional billboard only accommodates one advertiser, an electronic system can display many messages during the course of a day. For example, one advertiser can pay a premium price for exposure in drive time, while others take advantage of reduced rates during off-peak hours.

Investors seeking a reliable small blend choice should consider Royce Low Priced Stock (RYLPX), which returned 49.9 percent during the first nine months of 2009. Under its charter, the fund must buy stocks with share prices of less than $25. Lately portfolio manager Whitney George has been focusing on depressed issues that sell for around $5 or $10. These stocks can be excessively cheap because many institutions are not allowed to buy shares priced for less than $10.

A dedicated value investor, George aims to buy companies at a discount to their fair values. To limit risk, he sticks with companies that have strong balance sheets and high returns on capital. Such stocks proved resilient in the downturn. “Our value approach worked, and we did not lose as much as the indexes during the downturn,” says George.

The fund has big positions in manufacturing and materials, including healthy companies that dominate market niches. A holding is GrafTech International, a maker of graphite components that are used in steelmaking.

Another value investor is Robeco Small Cap Value II (BPSCX), which returned 39.8 percent during the first nine months of 2009. The fund has soared in bull markets and finished near the middle of the pack in hard times. That showing has enabled Robeco to return 13.1 percent annually during the past decade, outdoing 99 percent of competitors.

Depressed financial holdings that rallied sharply include MFA Mortgage and Anworth Mortgage. Such companies have enough capital to survive the recession and enable Robeco to maintain is winning record.