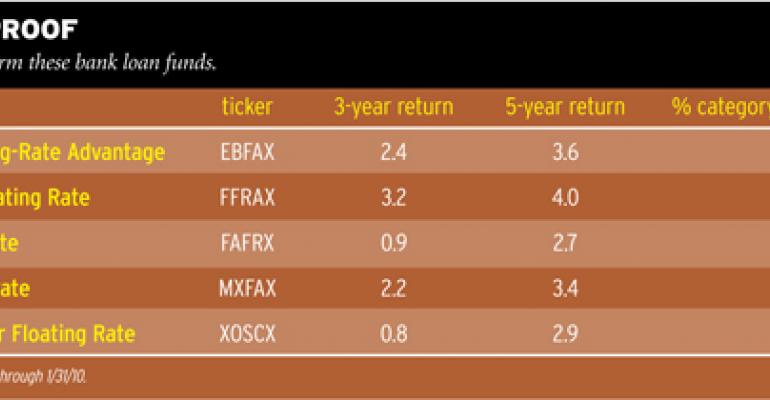 Federal Reserve Chairman Ben Bernanke has been carefully signaling that the Fed stands ready to raise interest rates this year if the economy continues to mend. For bond funds that could be bad news. (As you know, when rates rise, bond prices tend to fall.)

Faced with the prospect of higher rates, what should you do? Advisors disagree. One camp argues that you should prepare for higher interest rates by taking active steps, buying bonds that are likely to prove relatively resilient. But another group urges investors to sit tight. These advisors say that instead of trying to anticipate when rates will rise, investors should build a diversified bond portfolio and hold it through market ups and downs. Either approach for managing bonds can be effective. But advisors should pick one and stick with it.

Advocates of the active strategy urge investors to prepare for rising rates by shifting to bonds with shorter maturities. Those tend to suffer only limited losses when rates rise. To hold short-term securities, cautious investors should consider FPA New Income (FPNIX). FPA traditionally focused on intermediate-term bonds, but in recent years portfolio manager Tom Atteberry has hit the brakes. Worried about rising rates, he has shifted to cash and short-term securities. The fund currently has 16 percent of assets in cash, and most of the rest in securities with maturities of two years or less.

“We are very conservative because we don’t like losing money,” says Atteberry.

Most often the caution has paid off. FPA has never suffered a losing year since the current management took over in 1984. The fund has shined brightest in down years. During the turmoil of 2008, FPA returned 4.3 percent, outdoing its average peer by 9 percentage points.

Another strategy for coping with rising rates is to hold a bank loan fund. These invest in loans made to below-investment grade corporate borrowers. Because the loans are adjustable, they hold their value during periods of climbing rates.

Say the federal funds rate climbs 1 percentage point later this year. The yield on a 5 percent loan would likely rise to about 6 percent. Owners of the loans would collect the rising interest and suffer no principal loss. In contrast, short-term bond funds could lose 1 percent or more.

A cautious loan fund is MainStay Floating Rate (MXFAX), which has returned 3.4 percent annually during the past five years, outdoing 81 percent of its competitors. Portfolio manager Robert Dial keeps most of his assets in securities rated BB, the top grade of the below-investment grade universe. “We underweight the lower quality securities, and that helped us outperform when things got difficult in 2008,” says Dial.

For best results, Walsh suggests building a bond ladder. In this approach, you buy bonds with maturities of one year, two years, and so on. Every year one of your bonds matures. So if rates rise, you will have some cash available to invest for better returns.

Vanguard Group also suggests a buy-and-hold approach. For long-term investors, rising rates can boost returns, the fund company argues. To appreciate why, consider that bond fund investors receive interest that can be reinvested to buy more shares. When rates rise, the yields on reinvestments climb. Over time, higher yields can compensate for the declines in share prices that occur when rates increase.

Armed with the hypothetical data on bond fund returns, investors should be able to wait through periods of rising rates, says Stephani Smith, a Vanguard principal. “If you are mentally prepared to accept some temporary losses, you should be able to stick it out and not deviate from your long-term plan,” she says.