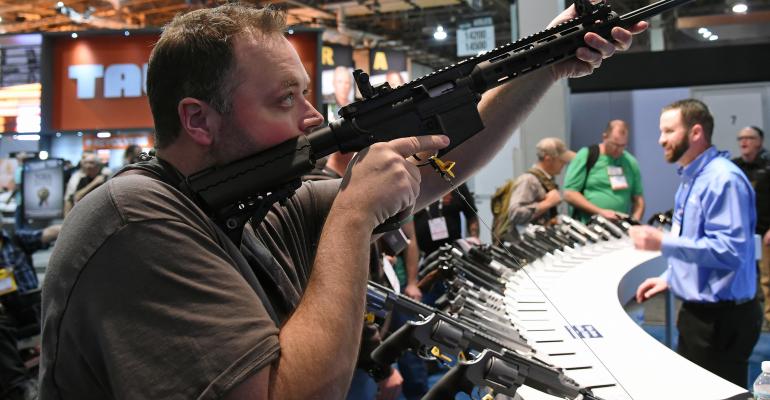 BlackRock Targeted by Gay Activists for Investing in Firearms

(Bloomberg) -- Gays Against Guns, a group formed days after the June massacre at a gay nightclub in Orlando, will target BlackRock Inc. to kick off a campaign pressuring companies to cut ties with the firearms industry.

The group chose BlackRock because some funds run by the world’s biggest asset manager hold shares in Sturm Ruger & Co. and Smith & Wesson Holding Corp., makers of guns used in previous mass shootings, said Tim Murphy, spokesman for the New York-based organization, which has affiliates in New Jersey, Los Angeles and Washington. Guns are linked to hate crimes against gay and transgender people, he said. Activists will borrow tactics from protest groups like Queer Nation and ActUp, which led the fight to draw attention to AIDS.

“We’re not afraid to shame and demonize,” Murphy said. “We have a history of loud, activism. We are going to target consumer partners who support both the LGBT community and the NRA and say it has to be us or them.”

Activism by lesbian, gay, bi-sexual and transgender groups opens up a new front in the gun debate. Human Rights Campaign, the largest LGBT advocacy group, is adding gun safety to its action platform for the first time. The group joined about 80 other gay and gun-safety groups in June to call for restrictions that they say would make shootings like the one in Orlando more difficult to pull off. In that attack, a gunman killed 49 people and wounded 53.

BlackRock, which manages $4.9 trillion in assets, is often cited as one of the best places to work for LGBT employees. By taking on Wall Street, the movement has the potential to turn allies into adversaries.

“BlackRock values diversity and has a history of supporting the LGBT community,” the company said in a statement. “We condemn senseless acts of violence in any form including the recent tragedy in Orlando.”

“As a significant provider of index-based investments, we are required to replicate the holdings of particular indices,” BlackRock said in the statement. “Third-party providers determine which companies are included in these indices. We do provide clients with customized portfolios that are seeking to have their values reflected in their investments, by removing firearms, tobacco and alcohol manufacturers. Those clients have entrusted us with approximately $200 billion.”

The Gays Against Guns protest will start with e-mailed demands from members and allies and escalate to more direct confrontation if BlackRock doesn’t agree to divest, Murphy said. The group wants the company to adjust its index funds to exclude gun stocks. Index funds mimic the composition of an index, rather than actively picking investments.

The group also said it plans to target other companies, which it said it wouldn’t identify to avoid giving those firms time to prepare.

In BlackRock, Gays Against Guns is targeting a firm with a perfect score on the Human Rights Campaign Corporate Equality Index, which measures companies’ policies and environment for LGBT employees. BlackRock also joined with other large businesses last year in encouraging the U.S. Supreme Court to strike down laws prohibiting same-sex marriage.

LGBT groups are making a mistake by taking on gun control, said Nicki Stallard, national spokeswoman for Pink Pistols, an LGBT group that supports gun rights. Supporters have been offering training to help LGBT residents protect themselves from attack, she said.

“Gay marriage was about protecting rights; what Gays Against Guns are doing is talking about taking away rights,” Stallard said. “I’m 1,000 percent against this. They are driving a wedge between people.”

Human Rights Campaign, which isn’t part of the Gays Against Guns protest, is still sorting out how to best push forward with its support for gun restrictions, said David Stacy, government affairs director for the advocacy group. The group has said it supports efforts to ban guns sales to people on terrorist lists or with a history of domestic violence; curtailing access to assault-style weapons and expanding background checks.