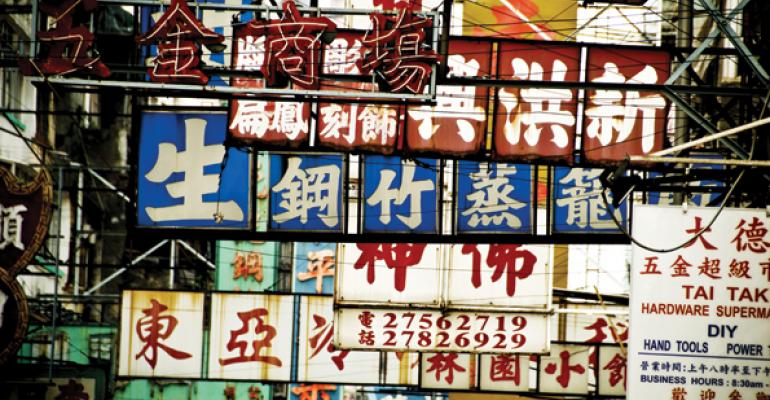 Bargain Hunting in the Emerging Markets

Are developing equity markets oversold? Here's how to play the rebound.

Emerging markets funds have been slammed by a series of distressing headlines. Eastern European shares suffered when Russia seized Crimea. After China reported slower growth, the country’s stock markets plummeted. Shares also sank in countries such as South Africa and Brazil, which rely on exports to Asia. The poor showing in emerging markets is contrasted with the rally in the U.S. During the year ending in February, emerging market funds lost 3.8 percent, while the S&P 500 returned 25.4 percent, according to Morningstar.

Faced with the disappointing results, many clients could be eager to leave the emerging markets. But there are good reasons to continue shopping in developing economies. For starters, many markets appear to be modestly priced. According to Morgan Stanley, emerging markets sell for a price-book ratio of 1.5, down from the 10-year average of 1.8. Meanwhile, the S&P commands a ratio of 2.8. Some stocks appear especially cheap. With investors worried about debt problems, big Chinese banks sell for price-earnings ratios of 4 and offer dividend yields of 6 percent. “The valuations are deeply depressed because people believe that China is about to fall off a cliff,” says Jeremy Schwartz, research director of ETF provider WisdomTree.

While earnings have slowed in many markets, some companies continue to report solid growth. Chinese Internet operations are soaring, and consumer businesses thrive throughout Asia and Latin America as millions of formerly impoverished people enter the urban middle class. David Semple, portfolio manager of Van Eck Emerging Markets (GBFAX), says that the average holding in his portfolio is expected to report a 20 percent earnings gain in the next year and sells for a forward price-earnings multiple of 11. “There are state-owned businesses that deserve to trade at discounts, but you can find real growth stories that sell at reasonable prices,” Semple says.

Among the most reliable performers is Harding Loevner Emerging Markets. During the past three years, the fund returned 3 percent annually, while the average emerging markets fund lost 1.3 percent. Harding Loevner looks for companies with strong balance sheets and consistent earnings growth. Many holdings operate dominant franchises. Such solid companies tend to fare relatively well in downturns.

Portfolio manager Richard Schmidt concedes that the Chinese economy may be entering an era of slowing growth. But he sees opportunities as the government takes steps to encourage more consumer spending. Schmidt holds Sands China, which operates casinos in Macau. Sands is applying a formula it perfected in Las Vegas, offering resorts that can attract families and conventions as well as dedicated gamblers. Schmidt says the Macau casinos can grow for years as more Chinese become wealthy enough to travel. “The gambling market in China is just beginning to develop,” he says.

Schmidt also likes Arçelik, a Turkish maker of refrigerators and dishwashers, which exports to countries such as Romania and Russia. Many Turkish manufacturers have a hard time competing with Chinese companies, says Schmidt. But Arçelik can match prices because it is expensive to ship appliances from China to Europe.

A holding is Greatview Aseptic Packaging, which makes milk cartons in China. At a time when milk consumption is growing rapidly, the company holds a dominant position. Few competitors are likely to appear because the government requires new entrants to meet rigid safety standards, says Semple. Another holding is Magnit, which owns Russian supermarkets and convenience stores. Semple says the company is an efficient operator with a strong market position. Profit margins can improve. “As business expands, it will get better terms from suppliers,” he says.

American Century Emerging Markets aims to find companies that have reached an inflection point when earnings will improve. Some holdings are steady growers that are enjoying a surge because of a new product or improving market. Other stocks are turnarounds, troubled businesses that are recovering from periods of losses. “The idea is to find situations where the next quarter will be better than the last quarter,” says portfolio manager Patricia Ribeiro.

Ribeiro holds stocks in many sectors and countries. She says that it is possible to find promising companies even in troubled markets. A holding is Tata Motors, an Indian automaker. The Indian market is stagnating, but Tata is reporting growing sales in other countries. Tata owns Jaguar and Land Rover, brands that are expanding in China and Europe.

Another holding is TAV Havalimanlari, a Turkish company that runs airport terminals, providing food services and duty-free shopping. While the Turkish economy is struggling, TAV operates in many emerging markets, including Georgia and Saudi Arabia. Sales should grow as global airport traffic increases.

For a steady way to invest in Asia, consider Guinness Atkinson Asia Pacific Dividend. Portfolio manager Edmund Harriss favors stocks that pay at least 2 percent dividends. He only takes companies that have delivered at least 8 percent returns on investment for the past eight years. Companies that survive the screens have operated successfully during recessions. Many holdings are dominant blue chips. Such rock-solid performers sometimes lag in bull markets, but they compensate by excelling in downturns.

A holding is China Mobile, a giant telecom with 710 million customers. “This is a dominant player that has been increasing its dividend payout over time,” says Harriss.