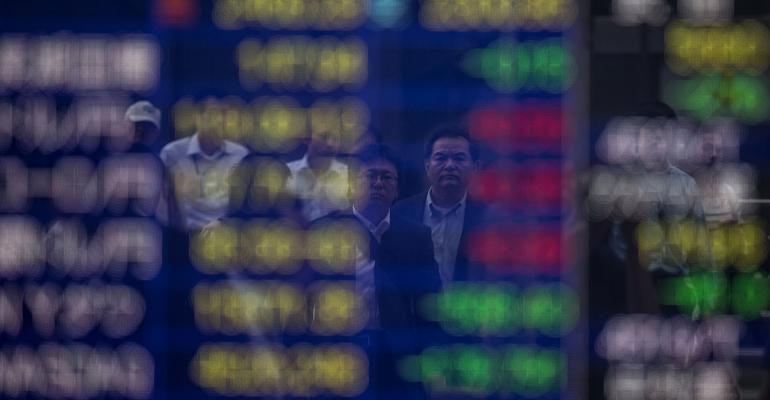 Americans Hate China, Yet Can't Stop Investing In It

(Bloomberg Opinion) -- More than 70% of Americans hold unfavorable views of China, a historical high, as many find fault in its handling of Covid-19. Yet that hasn’t stopped Americans from staking their retirements on the nation through their mutual funds. U.S. residents have amassed roughly $700 billion worth of mainland stock over the years, mostly in the technology sector.

Government data may tell you there’s little at risk — Americans held only $154 billion of Chinese shares in 2017, according to the Treasury Department. This is a gross underestimation, Harvard University’s Antonio Coppola and his colleagues conclude. In a recent paper, the academics put exposure at $695 billion by 2017, or 4.5 times the official figure. The current level could be even larger, as the benchmark MSCI China Index has rallied more than 10% since then.

The $541 billion discrepancy comes from the fact that many Chinese companies seeking listings in New York or Hong Kong issue shares via shell companies in tax havens such as the Cayman Islands. Beijing forbids foreign investment in strategic fields such as technology. As a workaround, the listing entities of “ATM” stocks — Alibaba Group Holding Ltd., Tencent Holdings Ltd. and Meituan Dianping, the Chinese equivalent of FAANG stocks — are all Cayman-incorporated units that don't directly own any key operating assets. While U.S. investors held $547 billion of stock issued by Cayman companies, according to Treasury data, close to 90% ultimately went to China Inc. instead, the authors find.

According to their estimates, China is the third-largest foreign destination for U.S. money in the equity space, trailing the U.K. and Japan. Going by the Treasury data, however, the country doesn’t even enter the top 10.

One explanation is that corporate China’s rise coincided with the death of value investing.

The last decade has been marked by the absence of growth. Investors crowded into a few promising firms, buying them at sky-high valuations, or even turning a blind eye to management lapses. Meanwhile, they dumped cyclical sectors such as financials and energy, which made them cheaper by the day.

Chinese firms play right into that narrative. Over half of the MSCI China Index belongs to fast-growing consumer-discretionary and communication-services sectors. MSCI Japan, by comparison, is more value-oriented, in that cyclical industrials remains its largest component sector.

Even the macro data are encouraging. Exports are growing at double digits again, as the nation’s manufacturing hub kicks back into gear, selling face masks, medical equipment and computers to the world. Even retail sales, which have lagged, are back to pre-Covid levels. The U.S., meanwhile, is still struggling to contain the virus.

In a stock world dominated by a handful of big U.S. tech names, fund managers who want to beat their benchmark indexes and justify their fees have to hold their nose and take their pick from smaller Chinese growth companies. The MSCI China Index is up 14.9% this year, outperforming the S&P 500 Index.

National security hawks don’t want U.S. money to fund China’s rise, but they are swimming against a strong current. Perhaps all the Trump administration can do right now is pretend not to see the problem.