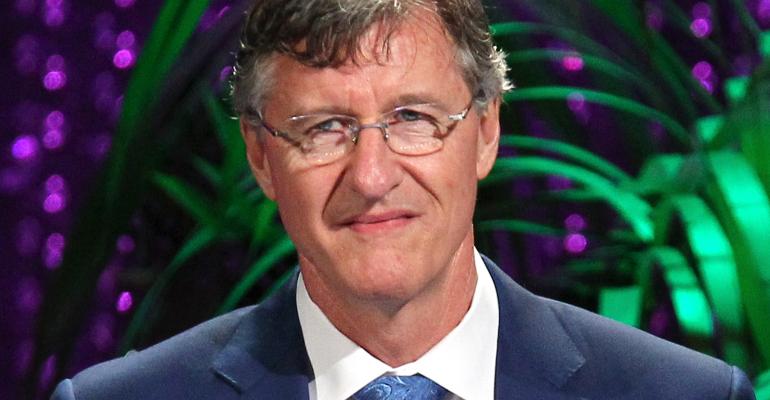 Calvert CEO John Streur says the asset management industry is on the cusp of “ESG 2.0,” where governance and engagement will be more important than simply filtering portfolios with new metrics. This creates wide-open opportunities for financial advisors.

John Streur, chief executive officer of Calvert, the $15 billion asset management firm and an early pioneer in socially responsible investing, thinks the asset management industry is at “the end of the beginning” of environmental, social and governance investing.

“In the beginning this business was started by people who wanted to invest with their heart,” he said, speaking at the recent Commonwealth Financial Group conference. That meant avoiding companies seen to be on the wrong side of an investor’s values. “We’ve been joined by profit-seeking investors” who are realizing that how a company’s executives handle the risks around a firm’s environmental, social or governance policies are of material consequence to how they perform financially over the long term.

That includes firms like Vanguard, Nuveen, Natixis, John Hancock, BlackRock and J.P. Morgan, all of whom have recently launched portfolios that, to some degree or another, avoid companies that have high risks around environmental, social or governance factors, or tilt toward those that don’t.

Streur thinks this is all for the better but warned that just slapping an ESG label onto an index fund that is tweaked to exclude offending companies leaves a lot of opportunities on the table.

The next wave—what Streur dubs “ESG 2.0”—will see investors and managers more actively engage with the companies they own—by proxy battles if needed—to push the corporate needle toward better ESG practices, and, he argues, ultimately better financial performance. Taking up that cause would also be a serious point of differentiation for advisors and open up deeper levels of conversations with clients based on such things as values, goals and legacy.

“I don’t think it matters much if you don’t invest in Exxon, though it may send a signal,” he said. “We want to understand how you oversee the company.” That means actively prompting companies toward changes that improve returns for shareholders, like perhaps reining in outsized executive compensation packages that tilt incentives toward short-term performance, pushing for greater diversity and better labor practices.

“Governance is extremely important,” he said. “As an investor, I am critically interested in my rights as a shareholder, or as a bondholder in my protections as a lender. Nobody will argue with that if they understand it.”

Calvert, he said, engages boards around a number of issues, including corporate diversity initiatives, supply chains and gun access. Most recently, they’ve begun discussions with 10 companies involved in the manufacturing or distribution of opioids, to try to “de-risk” those firms by prompting them to address the country’s addiction crisis. When the boards of companies fail to move on the issues, Calvert will turn to filing corporate proxies themselves, though it’s rare. Of the 15 proxy battles Calvert brought recently, 13 were removed because the boards relented and moved in the direction Calvert wanted. Two went to a vote, and Calvert won both.

The firm’s overall proxy voting record shows a more activist money manager willing to push against the wishes of management on the issues it thinks are important. In its 2017 proxy votes, Calvert voted for management proposals 57 percent; Vanguard, by contrast, voted with management at U.S. companies over 90 percent of the time in almost all of the categories broken out in its annual stewardship report.

In fact, according to Vanguard’s stewardship report, of the 213 “environmental or social risk oversight” proposals brought by outside shareholders in 2017, the firm only voted in favor of two. (That number increased to 7 percent so far in 2018.)

“Vanguard has a reputation of throwing the lever with management,” Streur said, though he added the employees at these large asset management firms were starting to pressure their employers to take stewardship issues more seriously.

Since being tapped to head Calvert in 2015, Streur has implemented a more quantitative, less subjective approach to implementing ESG strategies by incorporating the growing amounts of data around the issues, using corporate disclosures, ESG ratings firms as well as third-party and in-house research.

Still, Calvert has tried to take some of the subjectivity out of values-based portfolio construction by building a core framework of universal values, derived from things like the United Nation’s priorities, the World Bank, non-government organizations and basic human rights declarations.

“Without question we are making progress on a continual basis to more equitable and inclusive societies.” For portfolio managers, awareness of that is paramount. “From that, thousands of little rules-based criteria can follow.”

Some were concerned the election of Donald Trump would have a negative impact on the trend towards responsible investing, but Streur said just the opposite has occurred. Investments in ESG strategies have accelerated.

“There’s a few theories for that,” he said. “There is a sense that we’re not going to get (better environmental or social outcomes) with the government.” Corporations have a bigger impact on the world, for good or ill, so “there is a need to take action to improve the performance and behavior of companies.”

And companies are taking it seriously, he said. Just a few years ago, only 20 percent of the companies in the Standard & Poor’s 500 Index produced sustainability reports on their corporate activities, disclosing things like their use of energy and water resources, or policies around monitoring global supply chains or employee diversity initiatives. Today, 80 percent file disclosures.

Investors too are becoming more aware, and that opens opportunities for advisors. According to research Calvert did with parent company Eaton Vance, surveying over 600 financial advisors, 56 percent said “responsible investing” is driving new business to their practices, yet only 35 percent considered themselves “very well-informed” about it. Still, 84 percent of advisors’ clients say they are interested in responsible investing, while only 44 percent of advisors have incorporated it into their practice.

“Every one of your clients would respond to this if you sit down and walk them through what’s happening,” he said. “I can’t list one time a client leaves a meeting saying ‘I don’t care. I don’t want to do this.’”

Given the growing clout of ESG among next-generation advisors, in fact, “there is a risk factor for advisors who don’t do this.”