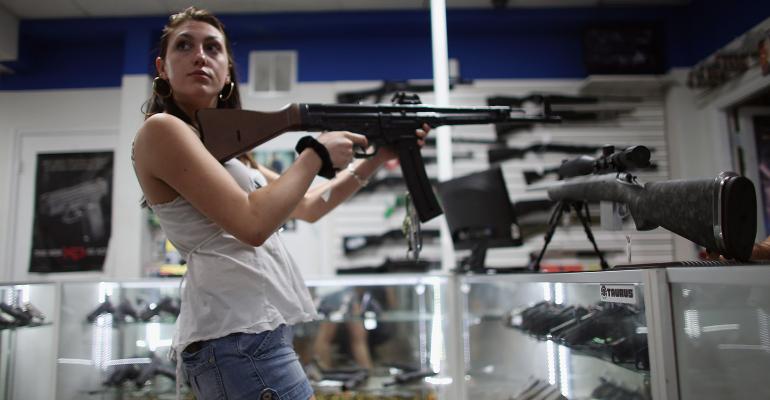 Active Funds Would Be Stars By Selling Gunmakers

They not only might have looked good, they would have shed some dogs.

(Bloomberg View) --In a recent op-ed in the Wall Street Journal, Dick Weil, co-chief executive officer of active fund-management firm Janus Henderson Group, argued that passive investors should abstain from voting as shareholders because they have “no interest” in the performance of particular companies. He even challenged Larry Fink, CEO of BlackRock Financial Management, which became the world’s biggest asset manager by virtue of its passive index funds, for his talk of “engaging” with gun manufacturers.

As this debate gains steam, I’m surprised no actively managed mutual fund -- or hedge fund, for that matter -- has seized this opportunity to highlight the difference that Weil speaks of by announcing it would sell its holdings in firearms makers. This is something index funds and exchange-traded funds simply cannot do. Fink and his ilk may talk about high-minded ideals, but actively managed funds could take actions that might make a difference. They would have looked like heroes (at least to the news media and about half the country ) and more importantly showcased the leverage they have over companies, helping them at a time when customers are leaving their funds for passive index products.

It isn’t as if the stocks of gunmakers are crushing it and helping the performance of these actively managed funds. American Outdoor Brands Corp. has lagged behind the Russell 2000 Index by more than 60 percentage points during the past five years, while Sturm Ruger & Co. has trailed by more than 70 percentage points. And even if an active manager were on the pro-gun side politically, exerting pressure might help make the case that those funds that have the option of selling are better shareholders and possess leverage to alter corporate behavior.

Although Janus doesn’t hold shares of gunmakers in its mutual funds, active funds as a whole are much bigger shareholders than BlackRock and other passive funds. This is something that was widely missed in the news coverage of this issue, which was focused almost entirely on ETFs, when in reality active funds have bigger stakes, as the table below shows.

In theory, if all of these active funds got together and sold all their shares of these stocks, it would create a snowball effect because then all the passive funds would have to sell in order to maintain the appropriate weightings in the index. In short, active funds lead, passive funds follow. Gun stocks gave the active funds a perfect opportunity to show this feature, as well as some fighting spirit.

So why didn’t they? Why didn’t even one active fund peep up -- even if just for the good public relations -- in the way that passive fund companies such as BlackRock did? Maybe in some cases they didn’t think they should get involved in a political issue. Or maybe they viewed the stocks as undervalued bargains. I have a different theory why active funds are so quiet and so unimaginative when it comes to fighting passive in the growing battle for the hearts and wallets of investors.

The reason is because they are making more in fees than ever thanks to an unrelenting bull market. This updraft has been so powerful that it has more than offset the almost $1 trillion in outflows from active equity mutual funds during the past four years, when money was withdrawn almost every month.

This is an unusual phenomenon that only really exists in the asset management business. There are few other industries where a business can see a sizable chunk of its customer base leave and still make as much -- or even more -- money. This is the oft-confused difference between assets and flows. As long as assets are going up in value, it doesn’t matter that cash is flowing out the door.

However, when the market turns -- and someday it will -- these funds could be hit by a triple whammy of falling prices, panicked investors pulling out money, as well as the secular shift of assets to passive investments.

At that point, perhaps actively managed funds will get more creative with their arguments and stop missing these great opportunities.