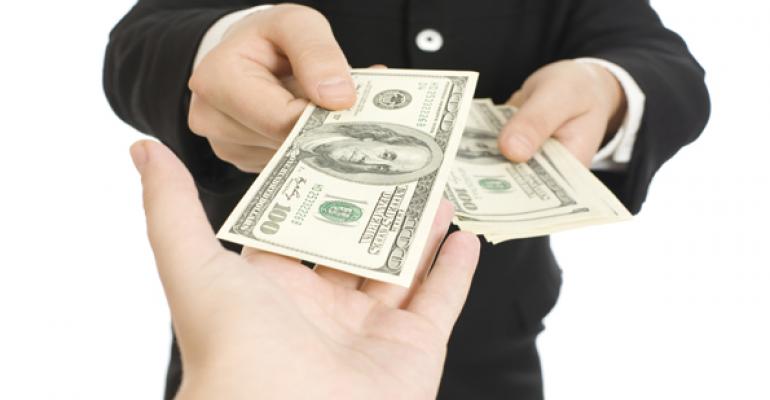 Pay Up: Brokers Sue MSSB for Bonuses and Win

It’s not everyday you hear about a couple of brokers suing the largest wirehouse in the industry by assets, Morgan Stanley Smith Barney. And it’s even more uncommon that the brokers actually win. Last week, MSSB was ordered by a FINRA arbitration panel to pay $131,609 each to two brokers, who claimed the firm failed to pay their back-end bonuses.

When partners Alan Jacobson and Richard Schwartz joined Morgan Stanley Smith Barney in October 2007, they were under the impression that they would each get a back-end bonus in the form of restricted stock as long as they met certain asset goals before June 30, 2009. It’s common practice for firms to incentivize new advisors to bring over a certain portion of their assets and clients from their previous firm. And they did. Within one month of joining the firm, they both hit their back-end bonus goals and maintained those asset levels through August 2008. But when the markets crashed in fall 2008, that sent their assets levels down, like many financial advisors at that time.

By the time June 2009 rolled around, Jacobson’s and Schwartz’s asset levels hadn’t recovered from the market swoon. But they also didn’t lose any clients during that time, the brokers claim, except for one $12 million account that MSSB terminated because the firm was uncomfortable servicing the client.

Still, they both expected to receive their back-end bonuses on June 30, 2009, since they had reached their respective asset goals previously, but MSSB didn’t pay up.

So they decided to lawyer-up, hiring Barry Lax, a partner at Lax & Neville in New York. In what Lax calls a “settlement move,” MSSB eventually gave Jacobson credit for that $12 million account and paid him his bonus. Because the two were 50/50 partners, they split Jacobson’s bonus.

They then filed a FINRA arbitration claim against MSSB, arguing that they met the asset goals set out in their contracts and should have received both bonuses. On Aug. 23, an arbitration panel decided in their favor, awarding them a total of $263,219, the exact amount they sued for, plus 9 percent interest from Oct. 5, 2010, until the award is paid in full.

“It’s very rare that two employees of a large wirehouse sue and get 100 percent of what they sued for,” Lax said.

According to the statement of claim, MSSB entered into recruiting agreements with the brokers, which said that if Jacobson and Schwartz reached AUM of $139 million and $148 million, respectively, any time before June 2009, they would be entitled to the bonuses. In addition, the claim alleges that their branch manager Todd Sacks had confirmed that they had reached their asset goals and would receive their bonuses in July 2009.

But according to MSSB’s statement of answer, the firm promised no such thing. Instead, MSSB claims that the brokers had to maintain these asset levels on June 30, 2009. “It is simply untrue that anyone at MSSB advised claimants that they would receive the restricted stock so long as they had such assets under management at a time prior to June 30, 2009, regardless of whether they still had such assets under management on June 30, 2009.”

“The hiring agreement didn’t say anything about when you had to meet your bogie,” Lax said. “It just said when you were going to get paid, which was in the 20th month.”

In the arbitration, Jacobson and Schwartz claimed breach of contract and a violation of New York labor law. According to Lax, the panel determined that New York labor law wasn’t going to apply, since the brokers were New Jersey residents. But the panel did find that it was a breach of their employment contracts.

“While we are pleased that the panel rejected claimants’ contention of violation of New York State labor statutes, we are disappointed in the panel’s decision regarding specific terms of their employment contract,” an MSSB spokesperson said.

“You’re incentivizing them to bring over their business,” Lax said. “They brought over the business. They’re there now. You don’t want to disincentivize them because of something that’s completely outside of their forces, which is market activity.”