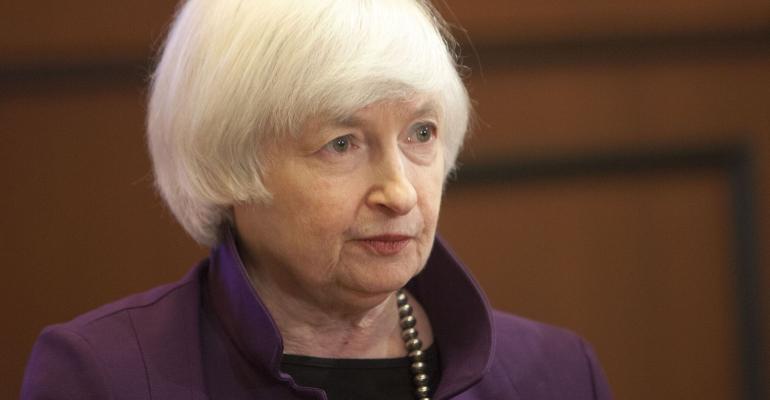 (Bloomberg) -- Janet Yellen says she doesn’t want investors to rely on the Federal Reserve for explicit guidance on the next interest-rate hike -- a communication strategy that’s leaving some flatly confused about the path of monetary policy.

Speaking Monday in Philadelphia, the Fed chair said “only on rare occasions” will the central bank spell out when it’s going to move. “I really think the best we can legitimately do is explain what factors are guiding our thinking,” she told the audience, referring to the Fed’s intention to make policy data dependent.

The challenge with that approach is that it seems to be making it harder to understand the U.S. central bank’s plans. Their intentions are signaled in statements issued after each rate-setting Federal Open Market Committee meeting, as well as subsequent comments by its 17 policy makers that don’t necessarily add up to a coherent explanation of Fed action.

Case in point: Investors were wrong-footed by the Fed’s statement in April, reading it as relatively dovish and then reacting with surprise when minutes published three weeks later showed most officials were inclined to raise interest rates in June.

Investors face another comprehension test at 2 p.m. on June 15 after the next FOMC meeting, when it issues a fresh statement and updates its economic forecasts. Investors can also tune in to Yellen’s quarterly press conference for more clues.

“There is a problem here,” said Charles Plosser, a former Philadelphia Federal Reserve Bank president. “Vacuous” FOMC statements have become the norm as competing camps on the committee thrash out a compromise, he said.

“The desire to reach consensus on the statement makes it more vague and uncommunicative," said Plosser. “That means it doesn’t reveal the true nature of the debate as it could or it should.”

To be fair, the Fed has spent a lot of time thinking about how to improve its messaging. It has a subcommittee on communications, and the FOMC in January discussed changes to its quarterly economic projections to illustrate how much uncertainty lies around the forecasts, according to minutes of that meeting.

St. Louis Fed President James Bullard has also argued for holding a press conference after every FOMC meeting, instead of every second one as is currently the case, though Yellen hasn’t so far shown any inclination to move in that direction.

Yellen and her colleagues have backed away from hinting a rate hike would be considered in June after the U.S. added just 38,000 jobs in May, the weakest in almost six years. Those hoping June’s statement will clarify what to expect in July shouldn’t hold their breath.

“I know market participants really want to know exactly what is going to happen,” Yellen said Monday. “There is, as I have said about 18 times, no pre-set plan.”

Investors see no probability of a June move and a 20 percent likelihood of a hike in July, according to pricing in federal funds futures contracts.

The Fed “is struggling to find the right combination of written and spoken signals that signal intentions but not pre-commitment,” said Ward McCarthy, chief financial economist at Jefferies LLC in New York.

April’s statement miscue wasn’t the Fed’s first. The FOMC also confused investors last year with “dovishness at the September meeting that had to be corrected at the October meeting,” said Michael Feroli, chief U.S. economist at JPMorgan Chase & Co. in New York.

These lapses recall the so-called taper tantrum in May 2013 when then-Fed Chair Ben Bernanke jarred bond investors with plans to scale back asset purchases.

The Fed’s own poor forecasting record may be making matters worse. In particular its quarterly economic forecasts, including the so-called dot plot projection of what officials view as the likely pace of future fed rate hikes, have attracted critics.

“The FOMC has fairly consistently signaled a tighter path of policy than the markets expected, and the markets turned out to be right,” said Jonathan Wright, an economics professor at Johns Hopkins University in Baltimore. “Communications have tended to err on the side of being more hawkish than what is ultimately done.”

For example, the Fed in March halved the number of rate hikes it expects this year to two compared to projections in December.

Plosser, who dissented three times in 2014 in favor of tighter policy, said that hurts credibility. “It has been a repeated problem. They keep saying we are getting close and then finding a reason not to do it,” he said.