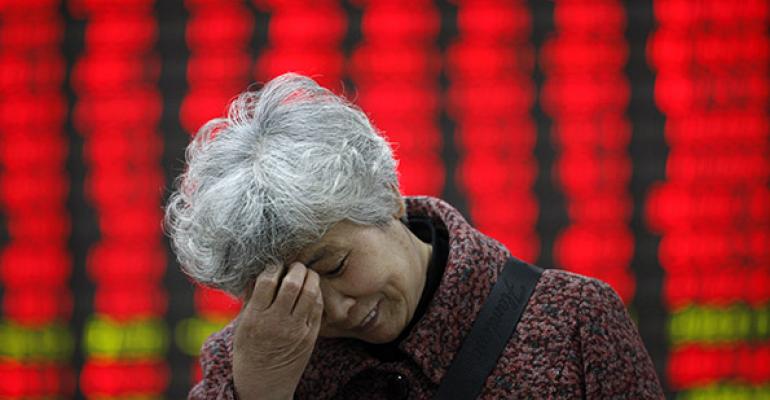 World's Most Extreme Speculative Mania Is Unraveling in China

(Bloomberg) -- From the Dutch tulip craze of 1637 to America’s dot-com bubble at the turn of the century, history is littered with speculative frenzies that ended badly for investors.

But rarely has a mania escalated so rapidly, and spurred such fevered trading, as the great China commodities boom of 2016. Over the span of just two wild months, daily turnover on the nation’s futures markets has jumped by the equivalent of $183 billion, outpacing the headiest days of last year’s Chinese stock bubble and making volumes on the Nasdaq exchange in 2000 look tame.

What started as a logical bet -- that China’s economic stimulus and industrial reforms would lead to shortages of construction materials -- quickly morphed into a full-blown commodities frenzy with little bearing on reality. As the nation’s army of individual investors piled in, they traded enough cotton in a single day last month to make one pair of jeans for everyone on Earth and shuffled around enough soybeans for 56 billion servings of tofu.

Now, as Chinese authorities introduce trading curbs to prevent surging commodities from fueling inflation and undermining plans to shut down inefficient producers, speculators are retreating as fast as they poured in. It’s the latest in a series of boom-bust market cycles that critics say are becoming more extreme as China’s policy makers flood the financial system with cash to stave off an economic hard landing.

“You have far too much credit, money sloshing about, money looking for higher returns,” said Fraser Howie, the co-author of “Red Capitalism: The Fragile Financial Foundation of China’s Extraordinary Rise.” “Even in commodities where you could have argued there is some reason for prices to rise, that gets quickly swamped by a nascent bull market and becomes an uncontrollable bubble.”

In many ways, China’s financial landscape was ripe for another mania. New credit soared to a record in the first quarter, giving individuals and businesses plenty of cash to invest at a time when several of the country’s traditional sources of return looked unattractive.

Government debt yields were hovering near record lows, while wealth-management products and company bonds had been rattled by a growing number of corporate defaults. Stocks were still too risky for many investors burned by last year’s crash, and moving money offshore had become harder as the government clamped down on capital outflows.

Jeremy He started pouring his savings into commodities last month after losing money in China’s stock rout and deciding that returns from his WMPs were too low. The 25-year-old employee at a multinational trade company in Shanghai set up a joint account with his friend to trade futures on rebar, coal and cotton, making as much as 150 percent before prices started falling at the end of last month.

"I’m pretty bored at work, so I trade commodities futures for some excitement,’’ said He, whose account swelled to as much as 700,000 yuan ($107,443) before sliding back to 400,000 yuan at the end of April. “Because I’m making investments with my friend, we can comfort each other when we are making a loss.’’

Nobody knows for sure how much of the trading surge has been driven by individuals, but the evidence suggests retail punters are playing a big role. More than 40 percent of the volume in rebar futures last month came during the night session, when it’s more convenient for people with day jobs to trade. The average holding period for contracts including rebar and iron ore was less than 3 hours in April, according to data compiled by Bloomberg.

Individuals with a bank account and official identity card can open a futures trading account at a brokerage within 40 minutes, with no initial balance required, Morgan Stanley said in a report on May 4.

What makes the frenzy in China stand out is the sheer volume of trading. Market turnover on bourses in Dalian, Zhengzhou and Shanghai jumped from a daily average of about $78 billion in February to a peak of $261 billion on April 22 -- exceeding the gross domestic product of Ireland. Turnover on Nasdaq’s exchange in early 2000, by contrast, peaked at about $150 billion.

China’s frenzy has begun to cool after the three main futures bourses took steps to curb speculation by raising margin requirements, lifting trading fees and, for rebar, cutting trading hours in the evening session. Total turnover on May 6 was $125 billion, down about $135 billion from the peak, while prices for rebar and iron ore have dropped almost 20 percent from their highs in April.

Some individuals are staying invested despite official attempts to rein in the market. Peter Sun, a 30-year-old professional in the financial industry in Shanghai, opened a futures account last month to trade steel, bitumen and glass after work. He devotes about half his income to investment, using technical patterns to make his buy and sell decisions because he doesn’t have time for more in depth analysis of supply and demand.

“I’m not concerned about measures aimed at cooling down the market,’’ Sun said.

For some commodities, there were fundamental reasons for prices to rise. Steel demand has increased amid fresh spending on infrastructure and a pickup in the property sector. New floor space under construction in China rose by 19 percent in the first quarter, boosting usage at a time when supplies of steel from warehouses and mills was running low. Physical prices surged, with rebar still up as much as 48 percent from its December low on the spot market, according to Beijing Antaike Information Development Co., a state-owned consultancy.

Yet China’s response to the boom suggest authorities are worried there’s froth in the market. Officials at the China Securities Regulatory Commission have pledged to prevent excessive speculation, while the Dalian Commodity Exchange said in a statement that “some sectors of the society still have limited understanding of the futures market.’’ Regulators including the CSRC have prepared further measures to limit price fluctuations if abnormal volatility persists, people with knowledge of the matter said last month.

“They don’t want this to turn into a speculative market in commodities,’’ said Tiger Shi, managing partner at Bands Financial Ltd. in Hong Kong, who’s been trading commodities for two decades.

If China’s equity bubble is any guide, regulators may find it difficult to cool excessive speculation without triggering a collapse in prices. Domestic shares lost $5 trillion of value last summer as authorities moved to curb leveraged bets and restrain trading in the stock-index futures market, where volumes tumbled by 99 percent from their peak.

“The worry is that as soon as the bubble bursts, it’s everyone out of the door at the same time,’’ said Paul Adkins, managing director of AZ China Ltd., a Beijing-based aluminum consultancy. “It’s the last guys out the door that have the most pain.”