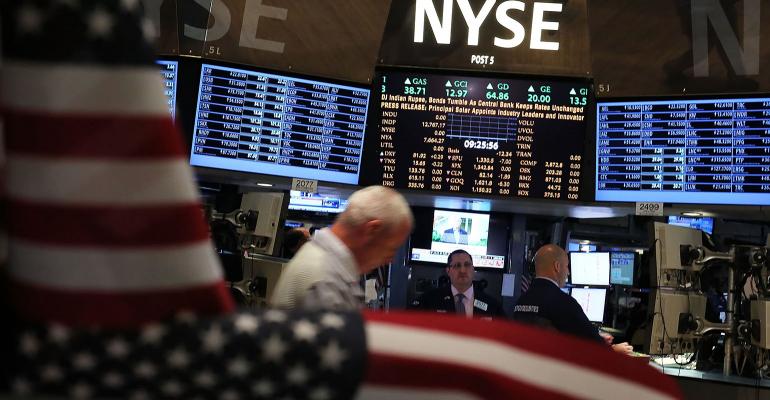 (Bloomberg View) -- Who does a better job of managing money, Republicans or Democrats? Thanks to a new study, we finally have at least a partial answer.

The paper, by Marian Moszoro and Michael Bykhovsky, uses Federal Election Commission data to identify equity fund managers by their political contributions. If the managers at a fund gave to only one of the two major political parties, that fund is then classified as having an intellectual or ideological connection to that party.

OK, so who wins this politically fraught horse race?

The authors find that for the years 2004 to 2014, with the exception of one period, equity fund managers of the two political affiliations did about the same. That should give pause to anyone who thinks that either political party has a monopoly on a better or more accurate view of the economy.

A second conclusion is that for one critical period of time, December 2008 to September 2009, the Democratic fund managers did much better. They earned 25.25 percent on average, compared with the Republicans' 17.17 percent -- a difference that, by the authors’ back-of-the envelope calculations, amounted to about $13.7 billion.

Why might the Democratic fund managers have done better in that period, but not more generally? I can think of a few possibilities.

First, the divergence comes right after President Barack Obama's election. Perhaps Republican-leaning fund managers were more likely to expect Obama to be bad for the economy, and by extension bad for the stock market -- a lack of confidence that led them to miss out on the market boom that started in March 2009. Then, by September, they had adjusted to the new status quo, allowing their investment performance to again converge with the Democrats'.

A second possibility, stressed by the study's authors, is that the Republican fund managers had an inferior understanding of monetary policy. In response to the financial crisis, the Federal Reserve pumped trillions of dollars into U.S. banks. Many conservative and libertarian commentators, perhaps due to the influence of monetarism and Milton Friedman, worried about inflation or even hyperinflation. Democratic fund managers probably were more influenced by Keynesian economics, which focused instead on the dangers of deflationary pressures during downturns. Subsequent years have shown that the true pressures were deflationary rather than inflationary, but the Republican fund managers may have been slower to understand this.

A third interpretation is that the Democratic fund managers were politically better connected after Obama's election. Yet it is not clear why the advantage would go away in September 2009, or how it would account for a separate (and harder to explain) period of superior Democratic performance from May 2003 to September 2003, when Republicans controlled the major branches of the federal government.

The data sample contained no comparable periods in which the Republicans did better, though I have heard anecdotal reports that conservative and libertarian-leaning managers had a much superior understanding of the late 1970s and the Reagan recovery of the 1980s. One speculative possibility is that some ideologies are better than others for understanding asset returns in certain historical eras.

Another interesting finding: Most of the fund managers donated exclusively to either the Democratic or Republican Party -- 44.9 percent and 46.6 percent, respectively. “Mixed” funds accounted for only 8.3 percent of the overall sample (of more than 80,000 fund-month observations). Since the choice of party doesn’t appear to provide much of a market edge, the loyalties might reflect longer-standing personal, regional, and institutional connections. Perhaps political unity within a company serves social and networking functions, even if it doesn’t provide any special economic insight.

As the 2016 election rolls around, the stock market doesn’t appear to share the concerns of many observers about the prospect of a Donald Trump presidency. When the voting is done, it will be interesting to see whether Democratic or Republican fund managers do better this time around.