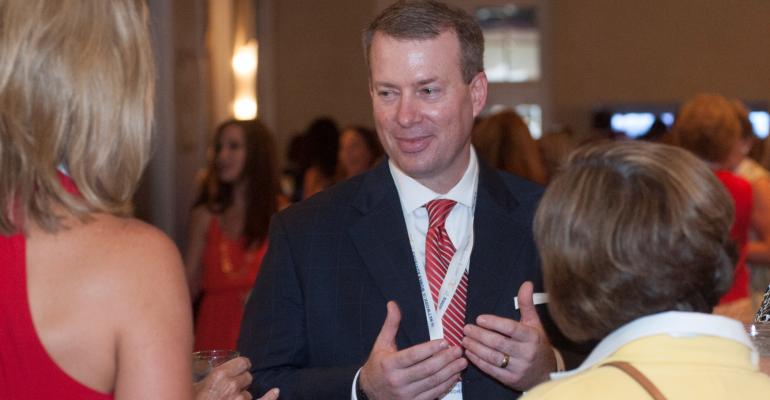 If you become the type of advisor who can say emotional intelligence without laughing, listening to what clients (and people) are telling you, helping them to separate the signal from the noise, you can be a man who can think like a woman

Woe is me – a lonely woman in financial services that’s been known to use the Twitter hashtag #nolineintheladiesroom. Women (mostly marketing+ HR) represent just over 40 percent of the workforce in financial services and wealth management, but a lot less (Cerulli estimates 11 percent) in advisory roles. As the first woman elected to the Hedge Fund Association (HFA) in 2014, I am thrilled with our progress, but know we have so far to go! What can one woman and a spoon do to move a mountain?

Enter Tash Elwyn – a guy who can think like a ‘woman,’ but roll with the rest of the guys in private wealth. Tash is a ‘mutt,’ a self-proclaimed Alex Keaton character from the popular 80’s TV sitcom, Family Ties. A conservative kid of very liberal parents, even his name is a tip-off: Tash. Tashtego, his namesake, was a brave, revered Native American harpooner from the epic novel, Moby Dick. An unlikely beginning for the president of Raymond James & Associates (RJA) Private Client Group, a so-called unicorn on Wall Street, is someone who deserves your attention to this story. Born in Boston but raised outside of Atlanta, Tash followed his parents (not on Twitter but in political leaning) by majoring in political science, studying Russian, and being accepted into and almost joining the Peace Corps after graduation. Stay with me, I promise this is a story about financial services.

It turns out Tash’s second career choice was financial services. While these two ‘missions,’ at first glance may seem at odds, I learned that it made perfect sense in Tash’s mind. A financial advisor is a mashup of advisor, rabbi, priest, and physician. We are a trusted profession, Tash emphasized, not an “industry.” Tash feels that he crossed the Rubicon from the Peace Corps to leading a division of Raymond James with more than 2,400 financial advisors while refining his underlying belief in a duty to serve clients who put their faith into an advisor.

In discussing the recent Raymond James Women’s Symposium, I was pushing Tash to tell me why another women’s conference was important. “It’s all about understanding each other,” Tash said casually. “Gender inclusiveness and diversity of thought makes our firm and our profession better. Any opportunity to be present with our advisors, especially our female advisors, hear from them, visit with them and learn alongside them is important to me. I am energized by the range of topics we discuss, from Smashbox makeup to asset allocation!"  It was at that moment I realized that Tash Elwyn could think like a woman and how Raymond James financial advisors, women, men, and end clients could all benefit from his outlook, attitude and refreshing point of view, as opposed to the proverbial ‘stale, pale and male,’ that I usually meet. Tell me more, I asked Tash, and he did willingly, openly and honestly. Even though he is a senior C-suite executive at a leading financial services firm, it became the smallest part of the conversation. Whether Tash Elwyn is of Emory University, the Peace Corps, Raymond James Private Client Group, or whether he is a son, husband or father, he is comfortable talking Smashbox cosmetics or market volatility without a wardrobe change.

While today’s advisors (professionals) should strive to shed any veneer and be themselves, it seems to be a way of life for Tash. We quickly moved to parenting where Tash told me, “Days are long; years are short.” As I have just delivered my youngest son, my ‘baby’, to college, I certainly knew what he meant. I have often thought of my own parenting experience and of my own boys, ages 21 & 19, as an ‘internship’ of sorts to my financial services career. Growing up with one sister and no brothers certainly colored my world. As soon as Tash told me that he had a 13 y/o daughter and an 11 y/o son, I could not wait to hear about his kids:

Tash said, “My daughter is focused and amazing. Here is a typical morning scenario: to brother Johnny, ‘It’s 7:10 am and you are not wearing a belt. Those pants need a belt.’ To me, ‘Dad we are leaving in 7 minutes and you have no tie. I don't want you to be late!” 13 going on 30 as girls are overall more mature than boys. Tash went on to tell me about one time he was able to make it home for family dinner during the week, his daughter asked, “Why are you home so early? Isn't there always one more thing to do?” Of course, now my story makes sense, and now you can see why the Peace Corps is not a million miles away from Wall Street; you can see from your backyard.

If you become the type of advisor who can say emotional intelligence without laughing, listening to what clients (and people) are telling you, helping them to separate the signal from the noise, you can be a man who can think like a woman – someone who is the new fresh-faced voice of Wall Street. Tash feels his role as president of RJA’s Private Client Group is an opportunity to impact societal good, to embrace a fiduciary responsibility and to change the world through capitalism and good advice. Tash is a Gen Xer, a, “we, our & us,” guy and not a, “I me, my,” guy.

I saw that Raymond James had a yoga session at their women’s conference and I know that Tash was sitting with some of the advisors after the class during which time he discussed Smashbox cosmetics with ease. I neglected to ask him if he took the yoga class. But I would not be surprised to learn that he was the teacher.

April J. Rudin, Founder and President of The Rudin Group, is a financial services marketing strategist.