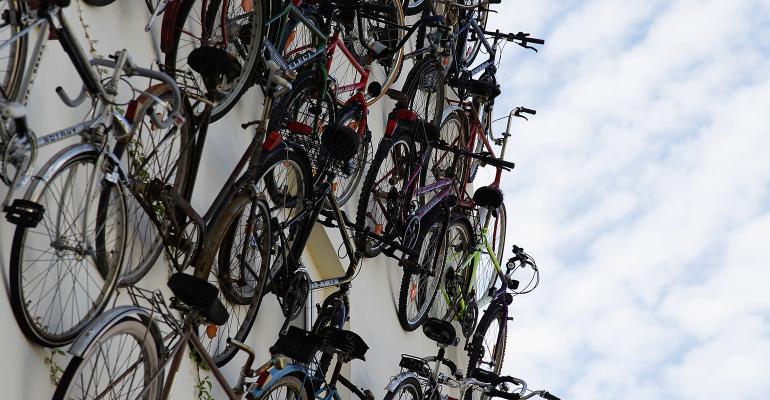 ‘Service with a Snarl’ from a Beach Bike Shop

Develop rapport and you win, regardless of which side of the sale you’re on.

Cycling has been a passion of mine ever since tearing my ACL some 35 years ago.  It started as my fitness replacement for running and evolved to the point where I’ve got more bikes than I can ride, and rarely pass a bike store without going inside.

So when my son Patrick, walked into the kitchen at our beach house and announced, “I’m never going into that bike store again,” he got everyone’s attention. This was the beginning of our traditional family gathering for Memorial Day weekend, and everyone was in the kitchen. “Whoa Patrick!” both of his sisters responded in unison — Patrick was always the mild-mannered member of the clan.  He then took us through what happened.

His bike had a flat, so he took the tube to the local beach bike shop, the type that makes most of its revenue renting bikes to tourists, to buy a new tube. His sales experience, from his perspective, was as follows…

“Could you tell me where the tire tubes are?” Patrick asked.

“You’re looking right at them,” snarled an ‘old guy’ working on a bike behind a sign that was prominently displayed, Ask the Bike Doctor. After a few minutes trying to locate the right tube, Patrick reluctantly asked “Excuse me, but I can’t seem to find the right size, could you point me in the right direction?”

According to Patrick, the Bike Doctor’s response had three parts – 1) he slammed down his tool, 2) he muttered “You kids don’t know how to do anything!” 3) after finding the proper tube, he dismissively tossed it to Patrick. How’s that for service?

I don’t know about your family dynamics, but ours has a lot of laughing and teasing. This is exactly what Patrick received from his tale of woe. It was in that spirit someone suggested that I take my road bike to meet his Bike Doctor - I’d been complaining the derailleur needed adjusting. I had been in the store before, but only to purchase a couple of used beach bikes, a relatively quick transaction that didn’t involve “the Bike Doctor.”

As I entered the store (under strict orders not to mention Patrick’s saga) and proceeded to wheel my bike back to the workstation, I noticed three rather larger bird cages similar to the cages we have for our birds.

“You must be a bird man, those cages look like the ones we have for our African Grey and Yellow-Naped Amazon,” I blurted out as I approached. You’d have thought I’d put a “be nice” spell on this guy. He put his tool down, looked at me with a half-smile and replied, “Also got an African Grey, damn parrot’s smarter than our customers.”

After 10 minutes of bird talk, I asked if he could look at my derailleur. Without a word, he put my bike on a stand and began making adjustments. The conversation turned from birds to bikes, and it was obvious that this guy really knew his stuff. When I asked what I owed, he said 5 bucks, and then yelled across the store, “Charge this guy 5 bucks – quick adjustment, and don’t waste his time.” Upon which he winked at me, telling me that his wife would talk my ear off even though she hates people. Huh? Can you imagine their dinner conversations?

This was getting really interesting. Sure enough, Mrs. Bike Doctor, with a snarl on her face as I handed her $5, prompted me to ask, “Is it true what the Bike Doc says – you don’t like people?” Her initial response was a stare, followed by a smile, and then the chatter I was warned about. With pride she said, “Had to throw someone out yesterday. Don’t have time for stupid questions.”

Two other customers were behind me overhearing this exchange, so I turned to them with a chuckle and said “Welcome to service with a snarl.” They gave me a nervous look, I guess not knowing what to expect, but Mrs. Bike Doc loved my description and kept repeating it to herself as she handled all of our transactions. Since that memorable occasion, I’ve ventured into the store a few times and all that was required to get preferential treatment was to utter “Service with a snarl.”

So Where’s the Teachable Moment?

Staring you right in the face.

It’s all about rapport.  Develop rapport and you win, regardless of which side of the sale you’re on. When I walked into the bike shop, I knew this was hostile territory, but I took time to build rapport and flipped it on them. In the sales world, as in life, building rapport brings out the best in people.

I can only imagine what type of business this burned-out, bike-shop couple could have built if they understood the value of building rapport.

From the sales perspective, slow down, take inventory, be observant, listen to what people are really saying – and the odds are that you’ll build rapport and make a sale. Time and time again.