Pine Grove Financial Group's Matt Gulbransen discusses the ROI that can still be generated from a marketing funnel built around direct mail seminars. 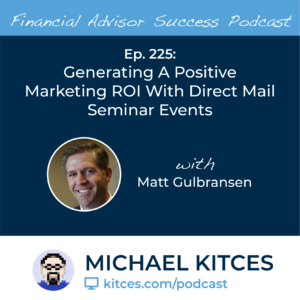 Welcome back to the 225th episode of the Financial Advisor Success Podcast!

My guest on today’s podcast is Matt Gulbransen. Matt is the president of Pine Grove Financial Group, an RIA in Minnesota that manages over $550 million for about 325 families.

What’s unique about Matt, though, is that despite the widely held belief that direct mail and educational seminars have gone the way of the dinosaur, he has continued over the past decade to see positive marketing results from using direct mail to fill seats at in-person seminar events geared toward educating people about planning for the plethora of life transitions they face as they approach retirement … and then convincing them to work with him to navigate those retirement transitions.

In this episode, we talk in depth about the ROI that can still be generated from a marketing funnel built around direct mail seminars, Matt’s key realization around why fear-based marketing will get you only so far and doesn’t ultimately help clients move forward to do business, the reason Matt started to charge an upfront planning fee for new clients as he gained traction with his seminars as a means of demonstrating that the work he and his team were doing had value, how Matt has adapted his process in a world where in-person events haven’t happened for a year, and why Matt feels that pre-retirees and retirees are still an attractive target market despite the level of competition in the niche.

We also talk about the way Matt has been able to leverage a relatively lean (at least by industry standards) team of nine people to service $550M of AUM by building out workflows and integrations within their tech stack in order to become ultra-efficient at their most common tasks, why the firm’s desire to focus on tax-savvy household-level allocations led Matt to choose 55IP as their core portfolio management software instead of more popular alternatives, and the various other technology tools that Matt’s firm has implemented to support “tax alpha” as a key value-add they bring to their clients (especially given that Matt and his clients live in a high-tax state).

And be sure to listen to the end, where Matt shares the challenges of starting his career as a young advisor at a wirehouse, how the challenges of prospecting led Matt to shift to the bank channel that had a more captive audience of prospects that could be referred to him, how it was Matt’s initial success with seminar marketing and the realization that he could grow an advisory firm without having a big-name brand behind him that eventually led him to launch his RIA, and how Matt has started to further scale the efficiencies he’s already built in his practice by bringing on outside advisor teams who are able to bolt on seamlessly to his system.

So whether you’re interested in learning how direct mail is still a viable means of attracting qualified prospects, how advisors can still use seminars to demonstrate the value of financial planning, or how Matt has been able to manage a relatively lean team with workflows and automations, then we hope you enjoy this episode of the Financial Advisor Success podcast with Matt Gulbransen.