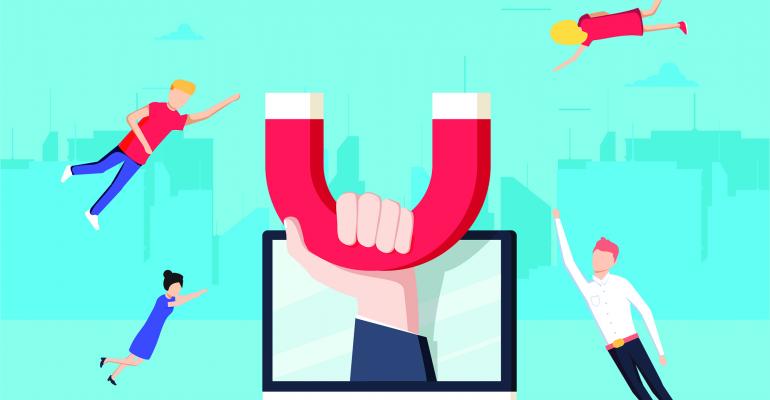 Last week, I was having a lunch meeting with a financial advisor friend of mine and the talk eventually turned to the topic of digital marketing. I was excited because I am passionate about digital marketing, and I thought it would open up a new opportunity for his firm.

This client, on the other hand, was a little less enthusiastic than I was.

“I don’t know—I don’t see what the big deal is,” he said to me. “I wanted to experiment to supplement my traditional marketing techniques like referrals, seminars and direct mail ... but I got ZERO return.”

Naturally, this concerned me, so I pressed him for more information. “I got hooked up with this local company and we spent a lot of money on Google AdWords and Facebook and I’m telling you, I’ve got next to nothing to show for it. At this point I doubt I’m even going to break even, let alone get some type of return on investment.”

As our conversation about financial advisor marketing went on, I realized pretty quickly what the problem was. This client was absolutely entering the digital marketing waters for the right reason, as he correctly recognized a trend that wasn’t going away anytime soon and he wanted to secure a better future for his firm.

The issue was that he’d started in the wrong place.

Yes, he partnered with a local firm—but it was one that didn’t service registered investment advisors exclusively. The reason why he saw no real return on investment to speak of was because that firm was trying to cram him into a “one size fits all” approach to digital marketing that just doesn’t exist.

Breaking free from that idea is officially step one.

One of the first things I tell all of my financial advisors is that when it comes to digital marketing strategies, you need to start with the words. In this case, I mean the unique content—the articles, the white papers and the similar types of collateral you’re trying to get in front of the eyes of every prospective client that you can.

Think about a Google AdWords campaign or a Facebook campaign as the beginning of a conversation, if you will. That may be your first touchpoint with a client, similar to how a conversation might begin at a networking event. But it’s just the beginning—and if you don’t have the right content to back up that impression, your conversation isn’t going to last for very long.

Assuming that you already have a solid brand, the next step becomes hiring a digital marketing firm that works exclusively in the RIA space to begin with. They understand your industry and what they do—now, all they need to do is understand YOU.

Communicate the core of that brand to them and go through a period of AT LEAST six months, during which you collectively build a content marketing engine where you, a partner or even a ghostwriter is engaging with your prospects by way of a steady stream of high-quality content.

Think about it like this: When a member of your target market sees your ad and clicks on it, they’ll get served up a piece of content that brings some genuine value to their life. Then, they may want to view one, two or even three more pieces—at which point they’ve become interested both in what you have to say and the larger brand behind it. THIS is how you move someone from one end of the financial advisor sales funnel to the other.

And how, exactly, can you expect that to happen if the content just isn’t there to begin with?

Slow and Steady Wins the Race

Once you have about 12 articles under your belt (including ones that have been published as a guest contributor for publications like Forbes and other centers of influence), at that point you can look to see if your efforts are actually being validated. In this case, “validation” means “is that piece of content bringing in new business to your firm?”

One of the reasons why having a portfolio of content is important (as opposed to just a small number of pieces) is that it gives you a chance to learn more about the topics your prospects actually care about. As you sat down to come up with all of your financial advisor marketing ideas and topics for blogs, maybe you quickly realized that wealth management was a far more important subject for your audience than you realized. At that point, you know that you need to spend time creating even more blogs and white papers focused on that area.

If you’re starting to get attention after creating these articles, then you know what your prospects are looking for. At that point, you’re in a better position than ever to keep communicating that to them over the long term.

Once that activity has begun to grow, THEN you can expand into additional marketing channels like Google AdWords and Facebook advertising. You’ll have a much stronger foundation from which to build than had you just skipped right to this step, as you will have those words dialed in and will have precisely constructed funnels that will go directly after the types of leads that turn into the sales calls you were after to begin with.

Content is an invaluable part of your marketing efforts as a financial advisor on its own—but it’s even more effective when it’s the beginning of something long term. But you need to see it as exactly that—a place to START that MUST come before jumping into the pay-per-click marketing pool with open arms.

Now, I know that a lot of people out there who run businesses similar to my own will object to a lot of this. “We generate leads with Facebook and Google AdWords,” they’ll likely say. “Your approach literally takes months before you see anything at all.”

Their approach may be good for a few short-term gains—but it could easily NOT do that, too. And not a few clients of ours experienced this with other firms before working with us.

But it doesn’t change the fact that in order to create a truly effective marketing strategy for your financial advisor firm, you MUST go deep into those words until the perfect message has been discovered. This isn’t something that is going to happen overnight—it takes time. This is OK, because the long-term advantage is more than worth it.

Writing content for your site by way of blog posts and similar opportunities, and building your brand as an authority by having pieces published in journals and other centers of influence, is how you hone and refine and perfect that messaging.

But more than that, these efforts in and of themselves generate an initial burst of leads whenever you contribute. You’re talking to someone else’s audience (like Forbes) and are turning a chunk of it into your own, too.

Content is also added to your site and is searchable on a regular basis, which can generate leads from not only techniques like search engine optimization (SEO) but also through social media activity as well. If your articles are written in a way that answers your future clients’ questions and addresses their concerns, you’re making it more likely that they actually become your future clients.

Starting with a cookie cutter paid ad on Google or Facebook might work, but once that ad stops running, guess what—the leads stop, too. It’s the difference between giving your business card to 1,000 random people and seeing 2% of them become clients immediately, versus handing that same business card out to 100 finely targeted, very specific people and seeing 50% of them or more become clients over the next six months. Read this great article from SearchEnglineLand about the pros and cons of both approaches.

Which one sounds like the situation you’d rather be a part of? Which one generates more leads in the long run?

This cookie cutter approach to advertising doesn’t really hit the prospect as effectively when compared with a refined conversation that is being built with content. The latter uses precise words that are communicating to specific people and in niches with unique value propositions.

The former is all about shouting into the wind as loud as possible, hoping that someone will hear you.

In the end, understand that good content is always something people want more of. It’s always being searched for, and it ALWAYS generates new leads.

Christopher P. Wendt is president of Midstream Marketing, a digital agency that generates predictable leads for independent financial advisory firms. Over the past 10 years, he’s spent hundreds of hours applying the LeadGen FormulaTM, a proven method helping financial advisors generate more leads. You can reach him at [email protected]