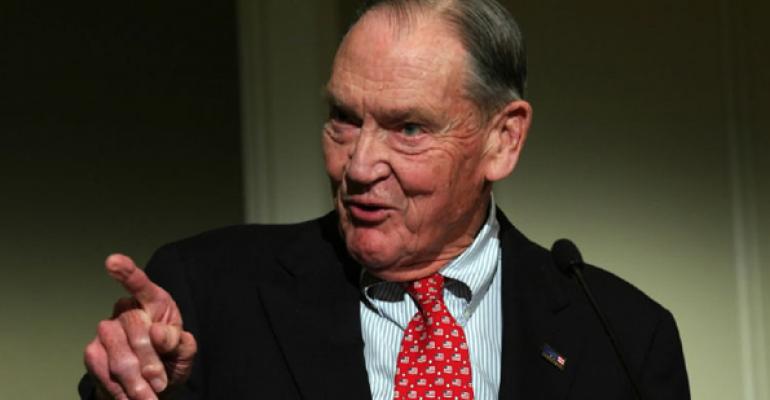 Amid the summer doldrums, twelve industry big wigs have signed a letter calling for Congress, the SEC, and the DOL to extend the fiduciary standard to those who give investment advice. But will their effort pay off?

Summer is usually a time when the markets are quiet, many people go on vacation, and regulators adjourn for summer recess. But 12 industry heavyweights are speaking out loud and clear, signing a “fiduciary declaration” urging Congress, the SEC, and the U.S. Department of Labor to extend a fiduciary standard to those who give investment advice. But some sources say their efforts won’t make much of a difference with the regulators.

The declaration is part of a larger initiative of the Institute for the Fiduciary Standard called “Fiduciary September,” which will include a webinar for reporters, a meeting with SEC Chairman Mary Schapiro, the release of a white paper discussing six fiduciary duties outlined in the declaration, and a fiduciary forum at the Cato Institute.

Bogle recently told Fortune magazine that a federal fiduciary standard is the “single most important action we need to be taking now.”

“When I see the push-back of brokers to the idea that when they give advice under certain circumstances, they should give the advice for the sole benefit or at least the best benefit of their clients, then I’m scared stiff because if that is the push-back, it tells me that a lot of money is being involved,” said Frankel, 87, who has taught for many years on the topic fiduciary law. “That’s why I want a change.”

But the fiduciary standard is still up in the air. The DOL has been getting pushback from Democratic congressmen regarding its efforts to tighten up the definition of fiduciary under ERISA rules. Phyllis Borzi, who’s heading the initiative at the DOL, said a final rule will not be issued by the end of the year.

The SEC’s fiduciary standard is also up in the air, as the agency works on conducting a cost-benefit analysis. The next step would be to solicit more information before proposing a rule, and once a rule is proposed, it can take 60 to 90 days to get public comment on the rule. And at present, the SEC doesn’t have the support of three of the five commissioners it needs to push a proposal through.

Some say Rostad’s initiative won’t tip the scale one way or another with the regulators.

“These are clearly heavyweights, and at the end of the day, it’s going to continue to remind the SEC, the Department of Labor, and Congress that there’s strong interest in moving forward,” said Duane Thompson, senior policy analyst for fi360. “I would love to say, ‘Yes, I think it’s decisive, and it’s going to motivate the agencies to move forward with the rule.’ But sadly, I don’t think that’s reality.”

“Section 913 of Dodd-Frank represented a political compromise,” said David Tittsworth, executive director and executive vice president of the Investment Adviser Association. “I think it’s extremely unlikely that Congress will revisit that provision any time in the near future.”

Arthur Laby, a law professor at Rutgers University who specializes in securities regulation, said a uniform fiduciary standard is the next logical move by regulators, but there are still a lot of tough unanswered questions with respect to its implementation.

“A lot of very influential people say there’s going to be a fiduciary standard. I don’t know of anyone who disagrees with that,” Laby said. “The difficulty is ironing out the details in implementing a uniform fiduciary standard.”

Such details and nuances have to be worked out before you can get any fiduciary rule through the SEC, DOL or Congress.

"Any rulemaking that will be pursued is going to have to deal with the specific provisions and nuances of Section 913 and will require an analysis of some very complicated provisions," Tittsworth said.