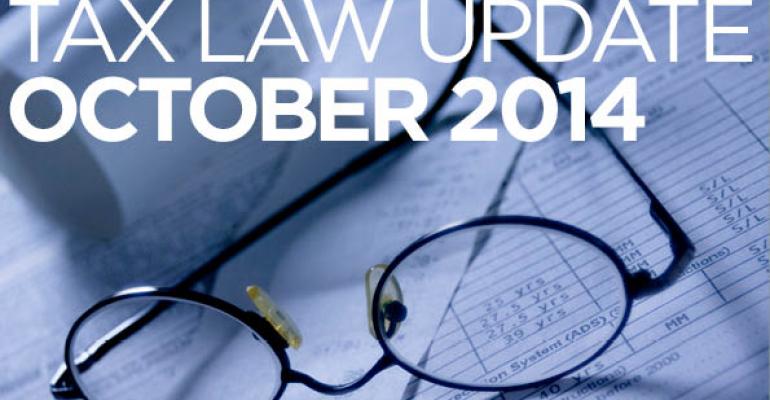 • Tax Court refuses Internal Revenue Service motions for summary judgment on valuation of 100 percent limited liability company (LLC) interest for income tax charitable deduction—In RERI Holdings I, LLC v. Commissioner, 143 T.C. No. 3 (Aug. 11, 2014), RERI Holdings I, LLC (RERI), filed its income tax return (as a partnership) and claimed a charitable contribution deduction of nearly $33 million for a donation of 100 percent of a remainder estate (which becomes possessory on Jan. 1, 2021) in a membership interest in another LLC (Holdings). Holdings, through another wholly owned LLC, owned land used as an AT&T web hosting facility. The land was originally purchased by the wholly owned LLC for over $43 million. However, the initial sole owner of the LLC interest, after having divided the Holdings interests into a term-of-years interest and a remainder interest, sold the remainder interest in Holdings to successive parties for much less. For example, the preceding owner bought it for $1.6 million and sold it to RERI for $2.95 million. One year after buying it, the principal investor in RERI pledged to make a gift to the University of Michigan (the University) of the interest, subject to a requirement that the University hold the interest for two years and then sell it.

An appraiser was retained to value the remainder interest in the land. The appraiser concluded that the value of the land as of the date of the gift was $55 million and, by using the actuarial factors from the tables under Internal Revenue Code Section 7520, the value of a remainder interest in the land was $32 million. Based on this appraisal, RERI claimed a charitable deduction of over $32 million (including related expenses) on its 2003 income tax return.

Two years after the gift, as required by the gift agreement, the University sold the remainder interest for $1.94 million to another LLC indirectly owned by RERI.

The IRS determined that the charitable contribution was overstated by more than $29 million and applied an accuracy-related penalty. It moved for summary judgment that the actuarial tables under IRC Section 7520 shouldn’t apply and that the value of the contribution wasn’t substantiated by a qualified appraisal.

The court agreed that the appraisal incorrectly valued a remainder interest in the real property, rather than the LLC interest. However, it reasoned that if the value of the remainder interest in the property could be substituted for the value of the remainder interest in the LLC interest, perhaps there was “no harm” and, therefore, “no foul.” Ultimately, it determined that there were factual issues that needed to be resolved to determine whether the use of the tables under Section 7520 was inappropriate, either because the LLC interest was a “restricted beneficial interest,” to which Section 7520 doesn’t apply, or because the use of the tables under Section 7520 resulted in an unrealistic and unreasonable result. The court noted that the vast disparity between the sale prices and the charitable deduction value may have stemmed from the failure to take the large mortgage burdening the property into account or, perhaps, the sales weren’t reflective of fair market value.

The IRS argued that the appraisal wasn’t a qualified appraisal because it was of the wrong property (that is, the remainder in real property rather than the LLC interest) and failed to disclose certain restrictions, such as the 2-year hold-sell requirement. Again, because of factual issues, the court refused to grant the motion for summary judgment. However, it did note that including information in the Form 8283 attached to the appraisal could constitute substantial compliance with the regulations and that several of the IRS’ points went to the accuracy of the appraisal, but not whether it was qualified. The court also invited the parties to address whether there was a scheme to generate large deductions for multiple charitable contributions of the same asset in which each of the donors made a small investment.

Because of the factual issues that still need to be resolved, the opinion isn’t determinative, but its reasoning on the valuation questions may be helpful.

• Tax Court upholds valuation of business and goodwill of key employee for estate tax purposes—In Adell v. Comm’r, T.C. Memo. 2014-155 (Aug. 4, 2014), the Tax Court upheld the valuation of a business interest owned by the estate of Frank Adell, in particular its accounting for the goodwill value of Frank’s son, Kevin, who ran the business almost single-handedly.

Frank Adell formed STN, Inc. (STN) to provide satellite uplinking services. Kevin handled day-to-day operations as president. Frank and Kevin also formed a nonprofit, known as “The Word,” to broadcast a 24-hour urban religious program channel through DirecTV. Kevin was instrumental in gaining support for the channel by meeting with religious leaders and DirecTV. The Word and STN signed an agreement in which STN agreed to provide uplinking, services and facilities necessary to broadcast its programs, and The Word agreed to pay STN a monthly programming fee equal to the lesser of the actual cost of such services or 95 percent of net programming revenue, not to exceed STN’s actual direct costs and allowable indirect costs.

The Word’s programming was noncommercial. The primary source of its revenue (95 percent of which was paid to STN) was from broadcasting contracts that Kevin negotiated and entered into with ministers and religious organizations. The Word, and therefore STN, earned significant revenues. For example, STN’s gross receipts exceeded $15 million in 2006, the year Frank died. From those revenues, STN paid Frank and Kevin significant compensation. Frank was paid over $7 million in 2006 and Kevin over $1.2 million.

After Frank’s death, Kevin’s sisters filed lawsuits against Kevin in probate court in his capacity as trustee of Frank’s trust and personal representative of his estate. The probate litigation affected STN, so Kevin established a new company, International Broadcasting (IB), and transferred all of the uplinking equipment owned by STN, without consideration, to IB. He and all of STN’s employees, except one, resigned and became employees of IB, and The Word and IB signed an agreement identical to the one signed by STN and The Word.

The estate valued the interest in STN on its estate tax return at $9.3 million. On an amended return, the estate took the position that the STN date-of-death value was $0. The IRS issued a notice of deficiency asserting that the value was over $92 million. The gap in values narrowed by the time the parties went to trial. At trial, the IRS expert valued the interest at $26 million, and the estate valued it at $4.3 million.

The estate’s second report ($4.3 million) valued the company based on its adjusted book value (the asset method) because, under the services agreement, STN couldn’t generate a profit because the monthly fee was limited to the lesser of STN’s costs or 95 percent of The Word’s revenues. Even though The Word hadn’t been adhering to the agreement, so STN was, in fact, generating profits, the appraiser reasoned that a hypothetical buyer couldn’t disregard the terms of the agreement.

However, the court agreed with the original estate’s appraiser and the IRS appraiser who both valued the company by discounting its cash flows (the income approach). It held that because The Word hadn’t enforced the limitation on the fees under the services agreement, there was no expectation that it would do so, and a hypothetical buyer would expect the company to continue to be profitable.

The next issue was how to reflect Kevin’s value of goodwill. The estate’s original appraisal applied an economic charge for Kevin’s goodwill that ranged from $8 million to $12 million. This charge increased STN’s operating costs, which decreased profits. The IRS assumed that Kevin would be retained for an acceptable salary, which was 8.1 percent of sales or about $1.3 million for 2006. This much lower cost resulted in a higher overall value for STN.

The court noted that Kevin hadn’t signed a non-compete agreement and was free to leave at any time (which he, in fact, did, when he organized IB). The court found the estate’s economic charge for his personal goodwill adequately reflected the value of Kevin’s relationships, but found the IRS’ salary assumption wasn’t high enough (noting that Kevin stepped into Frank’s shoes, and Frank had earned between $2 million and $7 million before his death).

As a result, the court upheld the estate’s original valuation of $9.3 million. The opinion is interesting for its discussion of the goodwill that Kevin provided. However, lurking in the background is whether the charitable status of The Word is at risk because of its failure to enforce the fee limitation with its payments to STN and the large salaries paid to Frank and Kevin from STN.