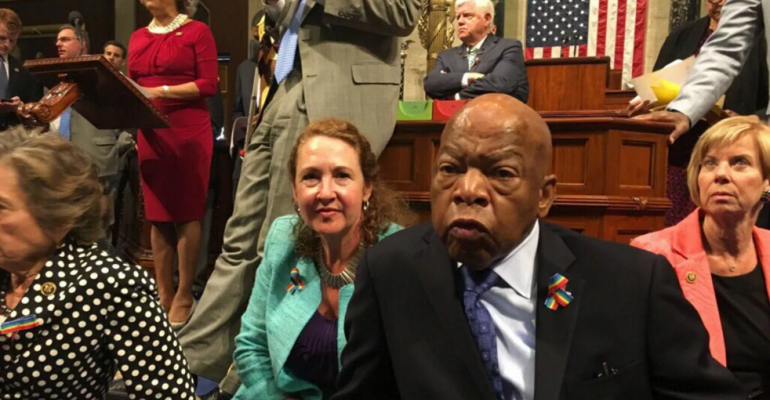 <p>The vote to override the veto of the bill to kill the Department of Labor&#39;s fiduciary rule interrupted the House Democrats&#39; sit-in on Wednesday night.</p>
News

A last-ditch effort by congressional lawmakers to kill the Department of Labor’s fiduciary rule failed Wednesday night, as House Representatives voted against overriding President Obama’s veto of a resolution that would have killed the rule.

The vote was one of several called to order during this week’s Democrat-led sit-in, which began Wednesday morning and ended Thursday afternoon, in protest of Congress’ inability to pass gun control legislation.

The 239-180 party-line vote — with House Republicans voting “yea” — fell short of the two-thirds majority needed to override the veto.

As Speaker of the House Paul Ryan called to vote on the DOL issue, House Democrats who spent the day crowded around the dais chanted, “No bill, no break.” Since the floor was occupied, no prepared remarks were given regarding the fiduciary rule.

“By refusing to debate, or even allow the House to conduct the people’s business, House Democrats have denied America’s average investors the opportunity to be heard," said Representative Ann Wagner (R-Mo.), one of the resolution’s co-sponsors, in a statement.

In the same statement, Wagner released the remarks she had planned to make on Wednesday, in which she states the regulation would make financial advice too costly for many middle-income Americans and refers to the DOL rule as “Obamacare for Americans’ savings accounts.”

“Both Chambers of Congress, Republicans and Democrats, came together and recognized the harm this rule will have on those looking to save for retirement,” said Wagner. “But with his veto pen, the President chose to stand with Washington, rather than countless American families.”

“Because this resolution seeks to block the progress represented by this rule and deny retirement savers investment advice in their best interest, I cannot support it,” Obama said in a statement at the time. “The outdated regulations in place before this rulemaking did not ensure that financial advisors act in their clients' best interests when giving retirement investment advice. Instead, some firms have incentivized advisors to steer clients into products that have higher fees and lower returns, costing America's families an estimated $17 billion a year.”

Now that Congress has officially failed to supplant the fiduciary rule, opponents of the regulation hope to see it defeated in court. So far, five lawsuits have been filed against the DOL regarding the new regulation, which will be implemented in April 2017.