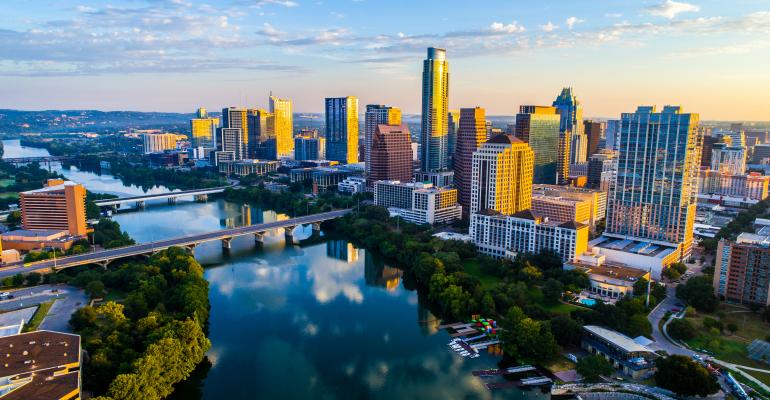 The economic engine of Austin, Texas, appears to be firing on all cylinders and shows no signs of running out of gas.

A $1 billion Apple campus with room for 15,000 employees is in the works in Austin; it will complement an existing Apple campus less than one mile away that employs about 7,000 people. Meanwhile, tech heavyweights like Amazon, Facebook and Google continue to add hundreds of employees in Austin. In August, the Austin metro area’s unemployment rate stood at 2.8 percent—the lowest jobless rate of any major metro area in Texas.

Against that backdrop, Austin ranks first in a new forecast from the Urban Land Institute and professional services firm PwC of commercial real estate prospects for 80 major U.S. markets in 2020. Austin appeared at No. 6 in last year’s Emerging Trends in Real Estate report and at No. 2 the year before.

“While the market is hot and record prices are being set all the time, the expansion this cycle is rooted in solid real estate fundamentals driven by economic growth,” says Doug Opalka, senior managing director of JLL Capital Markets and co-head of its Austin office.

So, what is it about Austin that now places it at the center of attention in commercial real estate? Aside from its much-vaunted lifestyle, wealth of talent, explosive population growth, economic diversity, relatively low cost of living, presence in a low-tax state and ability to crank out college graduates as home to the main campus of the University of Texas, Austin benefits from what Opalka calls “trajectory.”

“The market has … expanded dramatically over the past 10 years. But it would be hard to find anywhere in the country or even beyond that has better prospects for the next 10 to 20-plus years in terms of what will be accomplished in economic growth and diversity,” Opalka says.

The Emerging Trends in Real Estate report doesn’t, of course, look that far ahead. But based on interviews and survey responses from more than 2,200 real estate experts, including investors, developers, lenders, and brokers, the report concludes that Austin promises to be a red-hot market in 2020. The report puts Austin at No. 1 for industrial real estate in 2020, No. 6 for homebuilding, No. 7 for retail, No. 8 for office, No. 9 for multifamily and No. 10 for hotels.

Both Opalka and Brad Bailey, first vice president in CBRE’s Austin office, say Austin is flashing no signals of weakness in any sector of commercial real estate.

However, Todd Runkle, principal and managing director in the Austin office of architecture firm Gensler, notes that outdated class-B and class-C properties aren’t performing as well as more modern and appealing properties are.

“We continue to work with developers and building owners to study renovation versus new construction to transform underperforming properties into moneymakers,” Runkle says.

In Austin—identified in the Emerging Trends in Real Estate report as the top market next year for industrial properties—the industrial market “remained healthy” at the end of the second quarter, according to a report from Cushman & Wakefield. Leasing activity maintained a strong pace throughout the city, the report says, while vacancy rates hovered around 8 percent for all product types.

In multifamily, the Austin market posted year-over-year rent growth of 3.7 percent through April, according to a report from data provider Yardi Matrix, and the occupancy rate jumped to 94.4 percent as of March. Hampered by a labor shortage, multifamily developers in Austin are struggling to keep up with demand, Yardi Matrix says.

Howell Beaver, managing director of Austin-based multifamily developer Oden Hughes LLC, notes that demand for apartments in the Austin market was particularly strong this spring and summer, when renters leased units at a faster rate than at any time since 2015.

“Multifamily is doing very well in Austin. Young professionals continue to flock to the city for jobs and the quality of life that Austin offers,” Beaver says. “Many residents choose to rent because they can’t afford to buy a home in the urban core or because they like the flexibility and amenities that come with apartment living.”

As for retail, Austin’s market stayed tight during the second quarter of 2019, according to a report from NAI Partners, with the overall vacancy rate unchanged at 4.2 percent. Net absorption stayed in the positive column for the 32nd consecutive quarter.

Meanwhile, the hotel sector keeps chugging along. According to hotel consulting firm Source Strategies Inc., Austin posted the highest hotel occupancy rate of any Texas metro area in the second quarter (77 percent), and it “continues to be the most consistently vibrant lodging market in the state.”

CBRE says the Austin office market “is poised to have its strongest year ever,” with positive net demand surpassing 446,000 sq. ft. in the third quarter.

To satisfy the continuing appetite for office space in Austin, construction cranes keep popping across the metro area. In the second quarter, JLL reported that more than 5.2 million sq. ft. of office space was under construction in Austin, with over half of it already preleased. JLL points out that in contrast to previous years, office construction isn’t concentrated primarily in the downtown and northwest submarkets. Rather, activity also is robust in the east, south and southwest submarkets.

When it comes to buying office buildings and other properties, investors are exercising caution “in light of where we are in the market cycle,” CBRE’s Bailey says. Nonetheless, pricing remains aggressive and demand remains “extremely high,” particularly for properties close to Austin’s urban core, he adds.

Opalka says price per square foot for commercial properties and price per unit for multifamily properties, along with cap rates and ROI requirements, “all are aggressive right now.”

“This is because the underlying fundamentals are so strong,” he says, “and investors can see that even though things look expensive today relative to history, where we are going in the future is clearly going to be even better.”

Higher costs weigh on the economy

What’s not getting better, however, is the cost of living and cost of doing business in Austin. The metro area consistently ranks higher than Texas’ three other major metros—Dallas-Fort Worth, Houston and San Antonio—apartment rental rates, home prices and office rental rates.

For instance, according to a report from Yardi Matrix, asking rates for office space in Austin climbed to $42.48 per sq. ft. in August, up 14.2 percent from the same time in 2018. By comparison, asking rates were $28.44 in Dallas and $29.53 in Houston, the report shows. A tight inventory of space in Austin helps explain the difference. Yardi Matrix says Austin’s office vacancy rate in August was 8.7 percent versus 18.5 percent in Dallas and 21.6 percent in Houston.

As noted in the Emerging Trends in Real Estate report, Austin is “being challenged by the city’s own success,” with housing affordability and increasingly bottlenecked traffic being the two most pressing issues.

Those issues, in turn, are prompting homebuyers and apartment renters to seek lower-priced housing in suburban submarkets like Buda Cedar Park, Hutto, Kyle, Leander, Manor, Pflugerville and Round Rock, according to Bailey. In recent years, those suburbs have been among the fastest-growing cities in the U.S.

Some of these same submarkets are seeing an influx of employers that want to be closer to current and potential workers, he says. For example, packaging manufacturer Western Industries Corp. recently relocated its Austin operations to a 79,000-sq.-ft. spec building at Hutto’s new business park. The company plans to invest more than $3 million in the facility and expand to 145 jobs within 10 years.

Regardless of whether it’s urban or suburban submarkets, Gensler’s Runkle warns that hikes in construction costs and rental rates could outpace demand and perhaps lead to an overpriced market.

“Ultimately,” Runkle says, “I believe we need to design and build ‘smart’ buildings quicker to create more supply and reduce the current and projected demand.”

Despite the cost concerns and other nagging problems, Bailey and others are confident about the Austin area’s commercial real estate outlook for 2020 and beyond.

“The growth we are seeing is unprecedented and shows no sign of a major slowdown,” Bailey says, “making it extremely attractive as both a lucrative and safe investment market.”