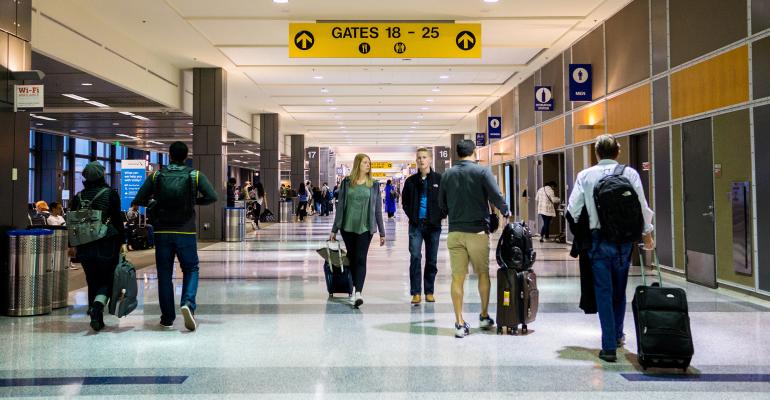 Lonestar Airport Holdings says it spent smore than $32.5 million after signing a contract six years ago to revive a largely abandoned auxiliary terminal at Austin-Bergstrom International Airport. But the city now wants to end the lease 34 years early.

(Bloomberg)—The operator of a terminal at the Austin airport is suing the Texas city over its plans to raze the building and terminate a 40-year contract, saying condemnation proceedings are illegal and the city’s compensation offer is an insult.

Lonestar Airport Holdings, based in New York, says it spent more than $32.5 million after signing a contract six years ago to revive a largely abandoned auxiliary terminal at Austin-Bergstrom International Airport, which it turned into a base for ultra-low cost carriers Frontier Airlines and Allegiant. The company says it’s helped ease congestion at the main terminal, which is struggling to cope with a surge in passengers this year.

But the city now wants to end the lease 34 years early and bulldoze the smaller building to facilitate an expansion of the main terminal. Lonestar found itself shut out of that plan, offered a take-it-or-leave-it $1.9 million check attached to notice of condemnation plans.

“The city cannot rewrite a contract that it voluntarily entered into merely because a new administration has a different view as to the desirability of public-private partnerships, especially after reaping the benefits of that partnership,” Lonestar’s lawyers said in their complaint. “And it certainly cannot take Lonestar’s business without honoring Lonestar’s Fifth Amendment right to just compensation.”

Like much of the city, Austin’s airport has struggled to keep pace with a surging population after a series of corporate relocations to Central Texas, including the headquarters of Tesla Inc. and Oracle Corp. Amid warnings about long wait times to get through security and traffic congestion at drop-off and pick-up sites, the airport expects to serve more than 20 million passengers this year. It set a record with more than 2 million passengers in May, up some 40% from the same month four years ago.

The South Terminal where Lonestar operates accounted for just 3% of airport traffic in June, or roughly 60,000 passengers.

Lonestar made its investments under a deal with Austin that the company says also gives it rights to participate in any future expansion plans at the airport. The city reads that contract differently, according to the lawsuit Lonestar filed Monday in Austin federal court that accuses city officials of attempting a “hostile takeover” of its business without fair compensation.

Before a new aviation director took over in mid-2019 and rolled out ambitious expansion plans that sought to “reassert local control” over the airport, Lonestar says was in active talks with Austin to jointly expand Bergstrom, including some redesigns that would demolish the South Terminal to accommodate new taxiways.

The company had been shopping for investment partners to fund its share of the expansion, in deals that valued Lonestar’s airport concessions and operations contract at $135 million to $305 million, according to the complaint. Those deals crashed when Austin went public with its plans to squeeze Lonestar out.

“The department will continue to fulfill its contractual obligations and exercise its rights under the South Terminal lease,” the Austin aviation department said in a statement. “The city continues to move forward with acquiring the leasehold through condemnation. This action is necessary to increase capacity.”

Sam Haynes, a spokeswoman for the aviation department, declined to elaborate on the city’s differing interpretation of its contract with Lonestar. When asked if condemnation was fair treatment for a development partner that thought it had a 40-year commitment with the city, she said, “That’s for the courts to decide.”

The city claims it owes Lonestar only $1.9 million as compensation for ending the contract early under a special Texas condemnation statute known as a “quick take.” This statute assumes business operators can simply relocate when a government entity uses eminent domain to seize their property before a condemnation challenge can play out in court.

Lonestar points out it can’t relocate an air terminal operation or fulfill its contracts with carriers, concession operators and other service providers outside of an actual airport. And Bergstrom is Austin’s only commercial airport.

“Lonestar will not have the opportunity to challenge the lawfulness of the city’s taking until after the loss of Lonestar’s entire business is complete,” the company complained in its filing.

--With assistance from Edward Dufner.