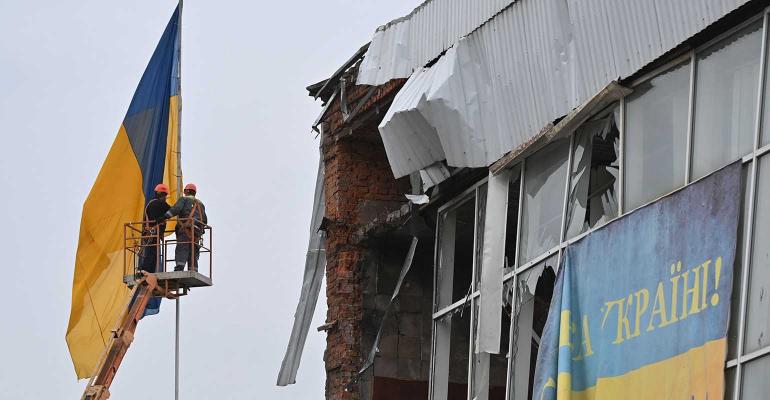 Many financial advisor technology firms employ software developers in the embattled country; they are scrambling to adapt, and to help.

Pinsker, the founder and CEO of Docupace, a Los Angeles–based company with 85 employees and about 70 contractors that operates a back-office operations platform for wealth management firms, had a staff of about 20 developers and support staff spread throughout Ukraine.

Expecting a Russian invasion to happen, he scouted out a hotel near the border in Poland and reserved multiple rooms for at least a month. His male employees couldn’t stay there, thanks to the country’s rule forbidding men ages 18 to 60 to leave the country. But their family members and the company’s female staff could.

The morning of the invasion, Pinsker directed them to the safe house, avoiding the days-long wait to enter Poland that developed soon after. Eleven family members of employees are now living there. “We were ready to act, because we had a plan already worked out,” he says.

Many technology firms, including many of those providing technology to the wealth management space, employ software engineers and programmers in Eastern Europe. There are around 200,000 software developers in Ukraine alone, according to software development outsourcing company Daxx. The level of technical skills and programming knowledge is high. The workforce is motivated and, by and large, more affordable than what can be found in the United States.

Now these U.S.-based companies find themselves scrambling to help their developers survive, while adjusting their operations to the new reality. “The invasion means more disruption to the industry than many people may realize,” says Michael Richardson, managing director of Tech-Azur, a New York City–based business tech consultancy that works with many fintech firms supporting financial advisors. It has 19 employees in Ukraine and also works with a team of 80 or so contractors.

Many developers live in regions that have escaped the worst of the damage so far, either because they relocated recently or were living there before Russia started building up its troops. Many continue to work, even as they’re interrupted by air raid sirens or other demands of defense and battle preparation.

Pinsker recalled Zoom meetings held in the first week of the war during which team members matter-of-factly excused themselves so they could take refuge in a bomb shelter, only to return to the call later. In one instance, a participant in a meeting who was a medical professional had to excuse himself for an hour to conduct a medical triage class for elderly women preparing to care for the expected casualties in a planned insurgency aimed at resisting a Russian occupation.

One software engineer, living in a suburb of Kyiv until the neighborhood was bombed, hid out in a basement for two days before escaping with only a backpack to a safer zone, where fellow employees found him living space. The company helped him buy clothes and other necessities. The developer insisted on using three vacation days to cover the time he was out of commission, rather than ask for special treatment.

The ability to keep working as well as they can, despite the difficulties, provides some normalcy and a respite from the chaos, explained Bradley DeLoatche, founder and chief product officer of Snappy Kraken, a marketing platform for financial advisors based in Ormond Beach, Fla., with five developers in Ukraine. “It gives them a sense of normalcy in at least one part of their lives,” he says. “They need something to focus on.”

Hiring Developers Outside of Ukraine

Still, companies with workers in Ukraine are moving deadlines and adjusting projects so developers can attend to their families. Robert Sofia, Snappy Kraken’s CEO, decided to push out a deadline for a client’s CRM project by two weeks, an unusual step for the company. Other firms with developers elsewhere are taking their Ukrainian programmers off mission-critical projects. At INVENT.us, which develops cloud-based systems for wealth management firms and others, CEO Oleg Tishkevich assigned his developers there to what he calls “core” R&D projects, instead of customized work for clients.

Other firms are ramping up their hiring of developers outside Ukraine. Most of Docupace’s 60 or so engineers are in countries ranging from Poland to Portugal, not Ukraine. When Pinsker realized that an invasion was likely to happen several months ago, he started adding to his pool of programmers in Latvia and elsewhere in Europe.

Pinkser also has long-term plans based on various scenarios. Should Russia occupy the country, making access to developers impossible, for example, he has steps in place to immediately shut down virtual access to Docupace’s data center and move it elsewhere.

Henry Zelikovsky, CEO of SoftLab360, a software developer for fintech systems in New York City, figures he’ll hire five more developers in the U.S. by September. “I think that’s what I’ll need in order to hedge my bets,” he says.

Richardson has taken a different approach. Recognizing that his Ukrainian developers couldn’t put in the number of hours they did before, he has hired more people in that country, from 15 to the current 19. “We recognize people may have to patrol their streets during their shift and do some of their work in their downtime,” he says.

Companies are taking steps to protect their people as best they can. Before the invasion, Richardson rented a house on the border with room for up to 18 family members of employees. So far, six have arrived. He also plans to find two to three more apartments in Poland to host 12 family members for a longer-term stay.

Tishkevich faced an additional problem: He has a “few dozen” developers in Russia. Immediately after the invasion, he managed to help many of them find temporary apartments outside the country. “There are innocent people who have nothing to do with the conflict,” he says. “There’s suffering on both sides.”