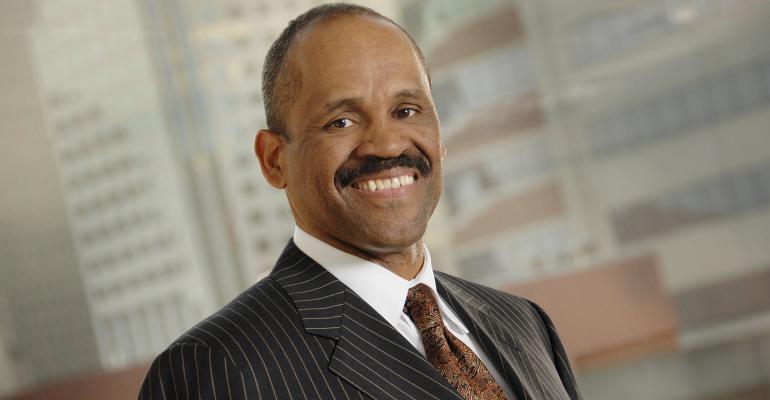 The chairman and CEO of MacFarlane Partners goes in-depth on his current investment strategy, solving wealth inequality and increasing diversity in CRE.

During his 41-year career in commercial real estate, Victor MacFarlane has witnessed five previous recessions, the end of the Cold War, the impeachment of two U.S. presidents, the rise of the internet, the 1992 race riots in Los Angeles, the 9/11 attacks and the election of America’s first Black president. But perhaps no time in his life has been more momentous than what we’re experiencing now—the coronavirus pandemic, the pandemic-spawned recession and the massive protests over racial injustice.

As a longtime real estate investor and developer who is Black, MacFarlane views the country and the commercial real estate world through a special lens.

MacFarlane is chairman and CEO of San Francisco-based MacFarlane Partners LLC, an investment management firm with about $3.6 billion in commercial real estate assets under its purview. On behalf of institutional investors, the firm concentrates on buying, developing and owning mixed-use, multifamily, office, retail and hotel projects in five gateway markets across the country: Los Angeles, New York City, San Francisco, Seattle and Washington, D.C. A pioneer in high-density urban development, MacFarlane Partners prides itself on being an “active corporate citizen and socially responsible investor.”

NREI: How have the pandemic and the recession changed your investment strategy?

Victor MacFarlane: My outlook is that other than the short-term impacts, I’m still a long-term believer in real estate. I think we have to take a wait-and-see attitude. When we look back over history, we have been very good at amnesia in terms of forgetting about what the pain was at the time. Could it be different this time if we don’t find the vaccine, if even more people start dying in the U.S.? I don’t think so, but it could happen.

You have to be cognizant of what’s happening in the short term. If you’re buying opportunistically—buying hotels by the pound, or maybe buying some old apartments that were converted into hotels to convert back to apartments—you have to be cognizant of the short-term impact of your dollars. For things that are longer term—for example, we have some urban development projects that won’t come out of the pipeline for two or three years—we’re proceeding with the assumption that there will be a recovery, that things will right themselves over time as people get back to work.

NREI: How have the recent demonstrations over racial injustice affected your firm’s role as an active corporate citizen and socially responsible investor?

Victor MacFarlane: It’s a moment that asks you to do even more. We’ve had other moments. This moment feels a little bit different, is lasting a little bit longer. The participation seems to be broader. So, the idea is, how do you make something lasting from a moment? How do you create sustainable change? What do you do to not only help your peer group, but to lift a mass of people that have been disenfranchised for centuries?

As a Black person and a so-called real estate leader, I’ve been doing more talking about the types of things that may be possible in our lane of real estate to make a difference. Just as it’s a multitude of things that keeps people down, it’s going to take a multitude of things to try to lift people up. I think we have to start attacking, in many different ways, the wealth gap. The largest part of the wealth gap is home homeownership. [In 2017, the homeownership rate among white Americans was 71.9 percent, according to the Urban Institute. For Black Americans, the rate was 41.8 percent.]

There have been proven, systematic mechanisms put in place by the government and others to stop Black families from owning homes. So, then you need systematic ways of helping people recapture that ownership. There are lots of different things like increasing tax credits that, in the aggregate, could start to move the needle. A lot of people I talk to say, “What can I do right now?” While writing a check today is good, it’s not as good as a systemic solution that is focused on lifting people up over the next two decades.

NREI: What can be done structurally to increase wealth in the Black community and increase homeownership?

NREI: It sounds like you’re saying we need to build a stronger foundation so that people in the Black community and anybody else can thrive and, therefore, be able to afford a home.

Victor MacFarlane: The foundation under Black people was systematically taken away from them for hundreds of years. And even after emancipation, there were systematic approaches to hold Black people back. In many ways, it’s surprising that we’re as far as we are. You need to build the foundation and then we need to integrate all people into our economic society.

NREI: What is your perspective on increasing diversity in commercial real estate?

Victor MacFarlane: I am more encouraged about diversity than I am about many other areas. I co-founded the Real Estate Executive Council, an organization focused on minorities in commercial real estate. I think there were four or six of us when we started it in 2003. It’s now well over 100, and it’s starting to make an impact and have its voice heard.

I think the openness of people to hiring minorities is greater than it was. We’re still lagging quite a bit, but that’s really no different from most of the larger well-paying professional fields. They tend to lag in terms of minority representation, whether it’s investment banking or private equity or other places. Those are the last bastions that need to be diversified.

NREI: What does the commercial real estate industry need to do to encourage more inclusion and more career development for people of color?

Victor MacFarlane: Most people that I talk to can do a lot because they’re the bosses. The bosses decide who gets hired. There are proven mechanisms to get your organization to hire minorities—incentive programs, outreach programs. All those types of things have been proven to work if you have the will to do it. It’s no longer okay to say, “I can’t find them.” They’re there.

Real estate people should require a diverse supply chain in construction and services. And I would love to see members of the Real Estate Roundtable “adopt” Real Estate Executive Council members. Furthermore, all corporations should be tasked with hiring people who look like the population. Then, from a recruitment perspective, if you have more people entering the system who are minorities, you will have more minorities who will rise to the top. It’s not enough to say, “I have one or two minorities on my staff” if 50 percent of your business is coming from minorities.

NREI: You’re somebody who’s been very successful on the development and investment side of commercial real estate. How do you get people of color involved in that side rather than property management or another area where there might not be as much of a financial stake?

Victor MacFarlane: Part of it is getting people trained as institutional managers. Then you have enough people where you’ll have some who want to be entrepreneurs and some who stay in those organizations and make a difference. Once they leave, their track record needs to be as portable as a white guy’s track record. If they’re leaving Goldman Sachs or Blackstone or BlackRock or another investment firm and someone is starting a new fund, they should have an equal chance of raising capital.

NREI: Obviously, New York City has been hit hard by the pandemic. How does that impact your view of New York as part of your investment strategy?

Victor MacFarlane: Long term, I think the bigger problem we have in New York isn’t pandemic- or recession-related. It’s the laws around rent controls that make it less desirable from an institutional investment perspective to invest in apartments.

NREI: What’s your sense of how the shift to remote work is going to impact development in urban settings?

Victor MacFarlane: I am in the camp that believes we have proven that we can work virtually and from home. But will we continue in that fashion, the way that we’re doing it now? I don’t think so. We may see more office hoteling; we may see people coming into the office for socialization, but only once or twice a week or splitting up the week. It’s going to be interesting to watch office demand. We’re not buying any office projects at the moment—it’s not a great buy in light of an uncertain future.