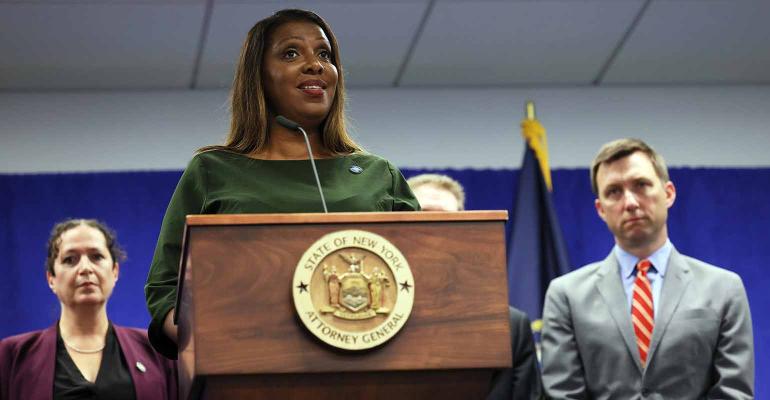 (Bloomberg)—Donald Trump and three of his children were sued for allegedly inflating the value of his real estate company’s assets, the culmination of a years-long probe by the New York attorney general into the former president.

“Donald Trump falsely inflated his net worth by billions of dollars to unjustly enrich himself and to cheat the system, thereby cheating all of us,” James said at a press conference.

Her suit is the latest legal threat to Trump as he weighs another run for the presidency in 2024. Trump is already facing a federal criminal probe of his handling of classified documents that FBI agents recovered from his Florida Mar-a-Lago home. The Justice Department also continues to probe his actions preceding the Jan. 6 assault on the Capitol.

James said Trump and his company from 2011 to 2021 inflated the value of numerous properties, including a Lower Manhattan skyscraper, his Fifth Avenue penthouse apartment and Mar-a-Lago, in order to obtain more favorable loan terms, cheaper insurance, lower tax bills and other “incredible financial benefits.”

In addition to banning Trump and his children from serving as corporate officers and directors, James is seeking $250 million in disgorgement and cancellation of corporate certificates to any company controlled by Trump that benefited from the alleged scheme. That would effectively prevent any of those companies from doing business in New York, she said.

Trump said on his social media site, Truth Social, that the lawsuit was “another witch hunt” by James, who he said “is spending all of her time fighting for very powerful and well represented banks and insurance companies, who were fully paid, made a lot of money, and never had a complaint about me, instead of fighting murder and violent crime, which is killing New York State.”

His lawyer, Alina Habba, said in a statement that James’s suit was motivated by politics rather than the law. “It is abundantly clear that the attorney general’s office has exceeded its statutory authority by prying into transactions where absolutely no wrongdoing has taken place,” she said. “We are confident that our judicial system will not stand for this unchecked abuse of authority, and we look forward to defending our client against each and every one of the attorney general’s meritless claims.”

Though her case is civil, James said she believed her investigation had uncovered federal criminal liability and had referred the matter to Manhattan federal prosecutors and the Internal Revenue Service. The Manhattan US attorney’s office declined to comment, and the IRS said it doesn’t confirm the existence of investigations until after documents appear on court dockets.

Sarah Krissoff, a former Manhattan federal prosecutor now in private practice, called James’s complaint “an incredibly detailed road map of this alleged fraud” and said “from the viewpoint of a prosecutor, it looks like they’ve done the work they need to do here, very methodically, to build this case.”

James’s case comes just before the Trump Organization goes on trial on criminal tax-fraud charges next month. The company’s longtime Chief Financial Officer Allen Weisselberg, who pleaded guilty to similar charges in August, agreed to testify for the prosecution as part of a deal with Manhattan District Attorney Alvin Bragg.

Weisselberg and other top Trump Organization executives were also named in James’s Wednesday suit, and she is seeking a ban on him serving as a company officer. Nicholas Gravante, a lawyer for Weisselberg, declined to comment on James’s lawsuit.

Trump has denied the allegations against him and long argued that the New York civil and criminal investigations were politically motivated. Like most elected officials in the state, James and Bragg are both Democrats. The former president sued James in federal court, claiming her “harassing and overreaching” probe was tainted by her political animus toward him. A judge dismissed his case in May.

James said she started the probe after Trump’s longtime lawyer and fixer Michael Cohen testified to Congress in 2019 that the Trump Organization regularly manipulated asset valuations to get favorable loans or tax benefits. Her office reviewed hundreds of thousands of Trump Organization records and interviewed numerous employees and lawyers involved in the company’s asset valuations to build her case.

Trump long fought subpoenas in the case, and much information about James’s probe first emerged as he and his company tried to avoid turning over documents or providing testimony. In a January motion seeking a court order compelling Trump to comply with her subpoenas, James gave detailed preview of her preliminary findings, saying her office had uncovered “significant” examples of “fraudulent or misleading” valuations.

In her suit, James noted that Mar-a-Lago was valued as high as $739 million based on Trump’s representation that it was unrestricted and could be developed and sold. At the same time, “Mr. Trump himself signed deeds donating his residential development rights and sharply restricting changes to the property,” James said.

Foreshadowing the Justice Department’s suspicions in the Mar-a-Lago investigation, James’s lawyers thought Trump was withholding documents even after his lawyers said he complied with her subpoenas. The former president was held in contempt of court in April and fined $10,000 a day as part of James’s investigation after he failed to properly respond to a related subpoena for documents and records in his personal possession.

Trump eventually resolved the contempt finding after employees signed sworn affidavits attesting to their efforts to recover documents and racking up $110,000 in fines. Some commentators have since questioned the validity of those representations in light of similar statements by Trump lawyers that all classified documents were returned to the government.

The former president also long fought against answering James’s questions under oath. After losing an appeal, he finally sat for a deposition in August but asserted his Fifth Amendment right against self incrimination and didn’t answer any questions other than to confirm his name.

Eric Trump, the former president’s son and an executive vice president at the Trump Organization, was deposed by state investigators in 2020 after fighting in court to delay the questioning. He also invoked the Fifth Amendment more than 500 times over six hours.

Pleading the Fifth carries risks for the Trumps, especially since James’s case is civil rather than criminal. A criminal defendant’s failure to testify can’t be held against them, but jurors in a civil case are allowed to draw a negative inference about someone’s refusal to answer questions.

As with the Mar-a-Lago and Jan. 6 probes, Congressional Republicans rushed to defend Trump and cast the New York suit as political ahead of the November midterm elections. Elise Stefanik of New York, the No. 3 Republican in the House, said James “has been on a deranged anti-Trump mission since she became attorney general.”

This isn’t the first time James has targeted Trump’s business dealings. She oversaw the resolution of a case that accused Trump and his adult children of misusing funds donated to the family’s charitable foundation. That foundation was ordered closed, and the Trumps paid $2 million in damages.