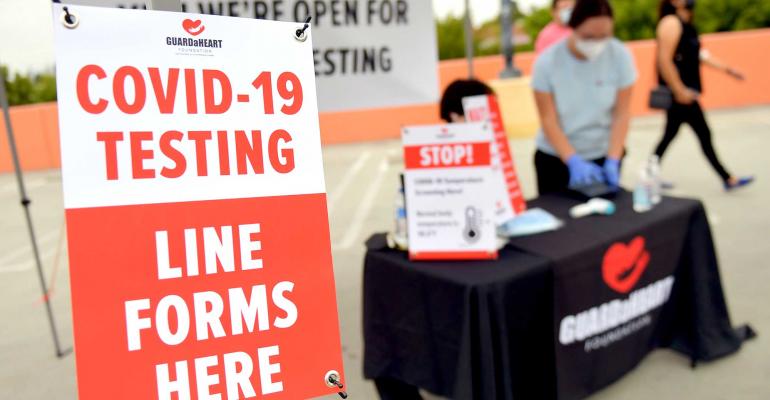 U.S. 30-year bonds led the rise, sending the rate down by as much as six basis points.

(Bloomberg) -- U.S. Treasuries advanced as fears over spiking coronavirus cases weighed on stocks and raised concern over the recovery in the global economy.

The nation’s 30-year bonds led the rise, sending the rate down by as much as six basis points. That narrowed the yield gap over five-year securities to the tightest in almost two weeks. S&P futures dropped as much as 2.1% as the death toll in the U.S. neared 200,000, extending their losing streak to a fourth day, the longest since March.

U.K. and German government bonds also climbed as case numbers in Europe jumped. Britain’s Chief Medical Officer Chris Whitty warned on Monday that the nation needed to take the virus “very seriously” for the next six months amid signs that the spread is accelerating. The Stoxx Europe 600 Index declined as much as 2.9%, dragged down by banks, and the Bloomberg Dollar Spot Index reversed losses to rise 0.4%.

Traders are currently trying to gauge just how big a threat the rising number of cases will be to the economic recovery, whether governments will impose more restrictions on movement, and whether economies need more fiscal and monetary support. The death of Supreme Court justice Ruth Bader Ginsburg Friday, months before U.S. elections, has also cast doubt on the latest wave of U.S. government spending.

“It’s all consistent with a more negative outlook on Covid right now,” said Richard Kelly, head of global strategy at Toronto-Dominion Bank. Ginsburg’s death “has definitely polarized the election even more and may reduce the odds of stimulus coming before the election,” he said.

German 10-year yields slid four basis points to minus 0.52%, the lowest level since Aug. 11, while those on similar-dated gilts fell three basis points to 0.16%. A Belgian bond sale saw the highest demand since 2010.

U.S. stock index futures extended their losses during European hours. December contracts on the Dow Jones Industrial Average Index and the Nasdaq 100 Index were down 2% and 1.5%, respectively.

--With assistance from Blaise Robinson.