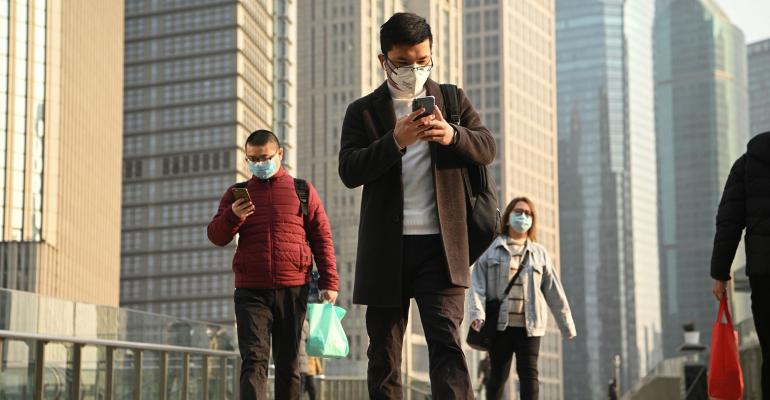 Bets on rate cuts accelerated on Monday, with Fed pricing alone moving about 10 basis points amid a global rush to safety

(Bloomberg) -- The global economic disruption caused by the coronavirus has prompted traders to load up on bets that central banks will have to ride to the rescue.

They’re pricing in a total of 205 basis points of interest-rate cuts from seven major central banks by the end of the year, up three fold from the end of 2019, according to calculations based on Bloomberg’s World Interest Rate Probability.

Investors now see the U.S. Federal Reserve reducing rates at least twice this year, and are pricing in a minimum of one cut by central banks in Australia, New Zealand, Canada and the U.K. They assign at least a 50% chance that the Bank of Japan and European Central Bank may follow suit.

Bets on rate cuts accelerated on Monday, with Fed pricing alone moving about 10 basis points amid a global rush to safety that saw stocks plunge and the yield on 10-year U.S. Treasuries drop to the lowest since 2016.

That came as authorities struggled to keep the coronavirus from spreading further beyond China. Finance chiefs and central bankers from the world’s largest economies said this weekend that they see downside risks to global growth persisting as the spread of the disease raises uncertainty and disrupts supply chains.

“A global pandemic would likely have persistent impacts on global demand as well as lengthy effects on supply chains and trade -- more U-shaped than V-shaped -- that may well call for a monetary policy response,” Krishna Guha and Ernie Tedeschi, analysts at Evercore ISI, wrote in a note Monday.

Still, some policy makers are more skeptical about the need for action. In recent days, Fed officials have sounded cautiously confident they’ve got interest rates about right as they assess the fallout, while ECB Chief Economist Philip Lane said the institution expects the euro-area economy to bounce back from the impact of the outbreak.

If it comes to pass, it would be a continuation of the wave of global easing last year, and defy predictions that central banks had done enough to avoid a recession.

While Evercore’s Guha and Tedeschi “would rather have a vaccine than a rate cut,” they recognize “that monetary policy is not optimized for addressing this type of shock.”