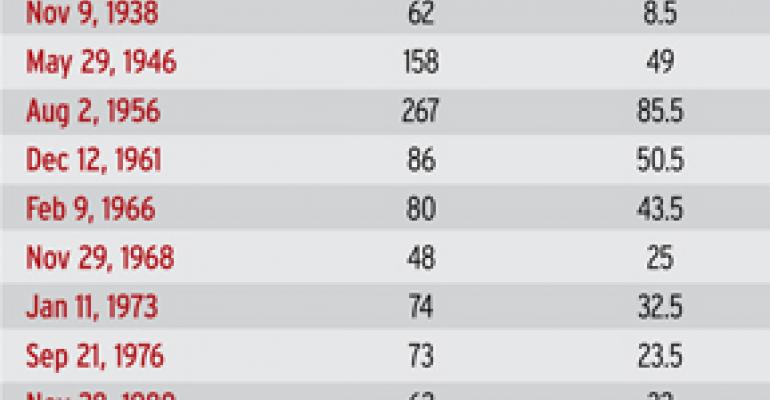 Symptoms Of A Maturing Bull Market

We are somewhere in the latter half of a bull market, but a large share of the returns in this cycle have already been realized.

By the time the majority acknowledges a bull market is taking place, the majority of returns have typically been realized. It is the quirky habit of the stock market to reward investors prescient enough to recognize that all the “risks” in the market will, at certain times, make equities look pretty cheap. Those who bought near the March low are now looking at very healthy returns in exchange for making the leap into equities at a time when few dared.

So where are we now in this expansion phase of the market cycle? Having booked a trough to peak return of 64 percent (as of the Nov. 25th high), the S&P 500 has certainly earned its bull market stripes. This, despite a complete lack of respect or recognition by the masses, who have instead chosen to channel a record amount of capital into fixed income investments.

When stacked against previous bull markets, the S&P 500's 64 percent rally to date is less than both the long term average (+123 percent) and long term median (+83 percent). The average is significantly higher, because it is warped by three massive bull market gains in excess of 200 percent.

Having booked a 64 percent price return from the March 9th bear market low, the current recovery is within sight of the long term median (+83 percent). The median serves as a more reasonable proxy given the extreme variance among the historical bull market returns in the table at right.

Is this cause for concern yet? No. But it does suggest that we can reasonably assume the bull market is mature from a performance standpoint. The age of the bull — at 8 1/2 months — still tags the current cycle as a greenhorn, not a Toro Viejo (which literally translates to “old bull”).

In terms of recouping the losses of the previous bear market, the current bull market is lagging the long term median by a wide margin. As of the recent November 25th peak, the S&P 500 had reclaimed nearly half of the losses of the most recent bear market, which shaved 57 percent off the index in the seventeen-month period spanning October 2007 to March 2009. In other words, the index is only about halfway there in terms of being made “whole” again.

As it stands today, the current “recapture rate” would be the second weakest in the 84-year history of S&P 500 returns, and substantially below the long-term recovery median of 186 percent (wouldn't that be nice now considering a 186 percent recovery from the previous bear market loss would put the S&P 500 at 2524!). But that's just fantasy. We don't expect to even approach new index highs in this cycle, yet this is not to suggest that the recovery hasn't been robust in terms of recouping prior bear market losses.

Since 1976, the public has enjoyed thirty-plus years of conditioning that cyclical bull markets always lead to new all-time market highs (although the S&P 500 record high of October 2007 was a meager + 2.5 percent above the March 2000 high). We expect this lesson will be “unlearned” when the current cyclical bull market tops out below the 2007 highs. It would not be unthinkable that even the subsequent bull market (or two) will also fall short of the 2007 high water mark.

Note: This has been excerpted from a longer article in the Leuthold Group's December 2009 research report, “Perception for the Professional,” Vol. 29, No. 12.