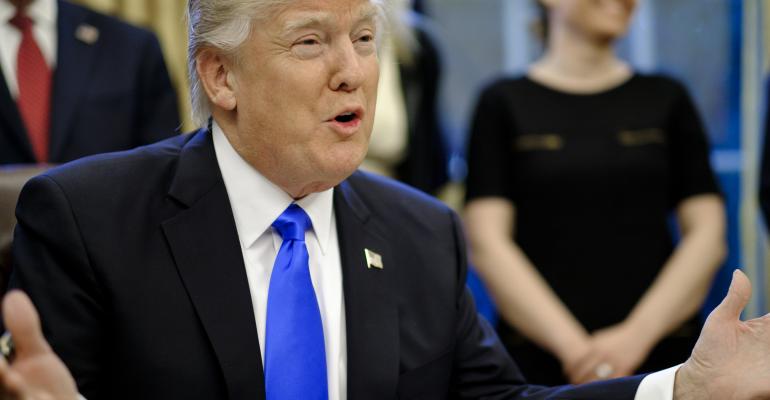 SRI Firms Come Out in Opposition of Trump Travel Ban

And they're leaning on influential CEOs.

More than 60 socially responsible investment (SRI) firms, human rights groups and religious organizations have signed a letter asking the CEOs of President Trump’s Strategic and Policy Forum to speak out against the recent travel ban, which, through a controversial executive order, restricts entry to the United States from seven predominantly Muslim countries, including Syria.

“The Executive Order undermines respect for human rights; the lives of workers and their families in the U.S. and beyond; and disrupts economic activity and company operations,” reads the letter penned by the International Corporate Accountability Roundtable, the Institute for Human Rights and Business, the Interfaith Center on Corporate Responsibility, and signed by religious and human rights organizations as well as a number of SRI firms.

The letter comes one day before a planned meeting between Trump and the Strategic and Policy Forum, which includes Jamie Dimon, CEO of JPMorgan Chase, and Larry Fink, CEO of BlackRock. It also asks for the group of current and former CEOs to recommend the Trump administration ensure respect for workers of all backgrounds and join in the United Nations’ efforts for sustainable development.

"I hold especially dear the values of inclusion and tolerance that make America great," said Qasem in a press release. "Many of our clients are immigrants who have been fortunate to live the American dream. We lose something fundamental to our identity as a beacon of hope to the world when we exclude people on the basis of nationality or religion."

Apart from facing philosophical opposition to the executive order, which many call a “Muslim ban,” the Trump administration has been criticized for not being clear about its breadth and for its poor implementation. It suspends Syrian refugee admissions indefinitely, puts a 120-day moratorium on all other refugee admissions, and restricts immigration from seven predominately Muslim countries for at least 90 days.

Trump has defended the executive order, saying in a statement that it is not a Muslim ban. Rather, it is a temporary measure meant to keep the United States safe while his administration reviews the vetting process of immigrants.

Since the November elections, members of the SRI community have pushed investors and asset managers to double-down on values-based investing, while some argue that SRI and ESG investing will see a sharp uptick over the next four years, as investors’ passions are fanned by the political climate.