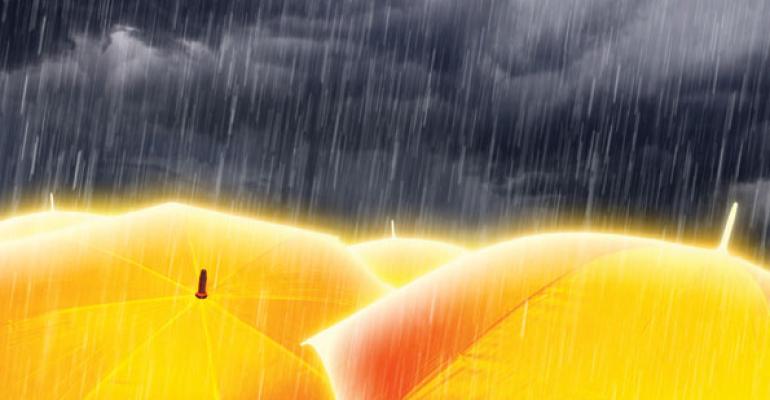 Some Ports to Ride Out the Storms

Despite its awkward name, Virtus Premium AlphaSector (VAPAX) ranks as one of the hottest selling funds. Introduced in 2010, Virtus now has $3.2 billion in assets. Advisors from leading wirehouses have been flocking to the new fund because it offers what clients demand: protection against market downturns. Instead of staying fully invested all the time, Virtus shifts its allocation. During hard times, the portfolio managers can keep 100 percent of assets in cash.

While Virtus employs unusually extreme measures, it is not the only fund that takes defensive measures, such as holding cash or selling short. Funds that offer protection in downturns include Columbia Thermostat (CTFAX), Leuthold Asset Allocation (LAALX), Stadion Managed Portfolio (ETFFX), and Weitz Partners III Opportunity (WPOIX). The funds follow different tactics, but they are all willing to tap the brakes when the vehicles seem headed for danger.

Plenty of advisors may scoff at the defensive tactics, saying that the moves amount to market timing, an approach that can fail miserably. Managers of the defensive funds concede that they may not get every call right. But they argue that their strategies offer downside protection and important diversification. “If we trail in up markets, that’s fine,” says Brad Thompson, manager of Stadion Managed Portfolio. “We are trying to provide a return stream that is not correlated with most other funds in the equity space.”

Stadion Managed Portfolio demonstrated its value during the financial crisis. In 2008, the fund lost 5.8 percent, outpacing the S&P 500 by 31 percentage points, according to Morningstar. Stadion lagged in the rally of 2009. But for the five years through June 1, the fund broke even, while the S&P 500 lost 1.5 percent annually.

To set their allocation, the Stadion managers use a system that tracks a variety of momentum indicators. If technology stocks are surging, then the fund will hold an ETF in the sector. The portfolio managers use country ETFs to take advantage of rallies in China or Brazil. When stocks sink, Stadion begins moving to cash. The managers base decisions on market moves—not forecasts of future action. “We are not trying to guess the bottom,” says Brad Thompson. “We want to buy something that is already going up.”

During the first week in April this year, the market uptrend slowed, and the fund shifted to cash. At first the move seemed premature. Then markets sank. During the May downturn, Stadion outdid 99 percent of its peers in the world allocation category.

Among the most notable performers recently has been Columbia Thermostat, which returned 3.8 percent annually during the past five years and outdid 98 percent of its peers in the aggressive allocation category. The fund sets its allocation according to a simple mechanical formula that aims to buy stocks when they are cheap. Under the system, Thermostat keeps 90 percent of assets in equities when the S&P 500 is under 1000. As the benchmark rises, the fund sells stocks and shifts to fixed income. When the index rises above 1750, Thermostat will only hold 10 percent in equities. With the S&P recently at 1270, the fund had 60 percent in equities.

Thermostat was started in 2002 by Ralph Wanger, a celebrated portfolio manager who was best known for his Acorn Fund, which outpaced the S&P 500 by 4 percentage points annually over a 26-year period. A dedicated student of market history, Wanger—who is now retired—observed that long bull markets tend to alternate with extended periods when the market moves sideways or down. From 1962 to 1982 the market went nowhere. Then beginning in 1982, there was a huge rally that lasted until 2000 when the Internet bubble burst. Surveying the damage, Wanger figured that the market was due for a prolonged period of sideways movement. He created Thermostat to cope with the difficult environment.

Charles McQuaid, portfolio manager of Thermostat, cautions that the fund does not win every year. From 2003 through 2006, Thermostat sold stocks as the market rose. As a result, the fund trailed during the good times.

Should you only buy Thermostat if you think that we are due for another 10 years of sideways markets?  Not necessarily, argues McQuaid. “Most people should diversify their portfolios by holding conventional equity funds and some defensive funds like Thermostat,” says McQuaid.

Another fund that shined in the financial crisis is Leuthold Asset Allocation, which outdid the S&P 500 by half a percentage point during the past five years. The Leuthold managers use a model that considers a wide range of factors, including valuation and market momentum. When stocks look cheap compared to bonds, the fund puts up to 70 percent of assets in equities. The fund can have as little as 30 percent in equities when they look expensive.

The fund limited losses by having less than 50 percent of assets in equities in 2007. The portfolio currently has 65 percent in stocks. The portfolio managers see plenty of problems in the stock markets, but they worry even more about bonds. Manager Matt Paschke says that interest rates are likely to rise soon, a move that will punish bonds. “There is a lot of risk in the bond markets,” he says. “If you have to hold either stocks or bonds, then you should prefer stocks,” he says.

When it can’t find cheap stocks, Weitz Partners III Opportunity sometimes sells short or holds cash. The fund currently has 11 percent of assets in short positions. The Weitz portfolio managers typically short ETFs to gain downside protection. During 2008, the fund had 23 percent of assets in short positions, including ETFs that track real estate and small-cap stocks.

The short stakes don’t always succeed. In the fourth quarter of 2011, the fund shorted SPDR S&P 500 (SPY), a move that hurt returns when the market rose. But in the May downturn, short positions helped Weitz outdo 95 percent of its mid blend peers. During the past five years, the fund has returned 1.6 percent annually, outdoing 97 percent of peers. “Shorting gives us a big advantage in downturns,” says portfolio manager Dave Perkins.