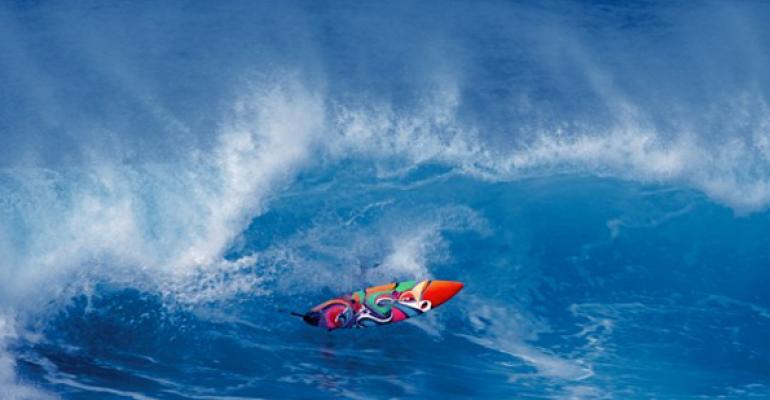 The Price of Buying High

A recent study by Morningstar suggests the costs of ill-timed moves.

Advisors have long struggled to prevent clients from buying and selling at the wrong times. All too many investors pile into hot funds just as they are peaking—and then sell after highflyers have crashed. Such bad timing was particularly prevalent during the financial crisis. Following the turmoil of 2008, equity funds recorded huge withdrawals as frightened shareholders sat on the sidelines.

Some of the worst investor returns came from volatile funds, which tend to spook investors. A notable performer was Fairholme (FAIRX). During the 10 years ending November, the fund returned 11.4 percent annually and outdid 99 percent of peers in the large value category. But the investor return was only 5.5 percent.

Typical investors tended to buy and sell at the wrong times because of Fairholme’s erratic results. Portfolio manager Bruce Berkowitz is a diehard contrarian, making concentrated bets on a few stocks. At one point the portfolio had 44 percent of assets in a single stock, American International Group, the insurer that was bailed out during the financial crisis. As a result of the bold strategy, the fund offered shareholders feast or famine. In 2010, Fairholme topped 99 percent of peers, and the next year the fund trailed 100 percent. With investors plowing into the fund after a hot streak, assets climbed from $11 billion in 2009 to $18 billion in 2010. But the next year, assets sank to $7 billion as shareholders panicked and sold.

Many international funds had weak investor results. The average international equity fund returned 7.7 percent annually, while the investor return was 6.4 percent, Morningstar found. Typical investors fared poorly because they tended to leap into hot emerging markets just as they were peaking. But not all fund categories delivered subpar investor returns. Among the most reliable choices were balanced funds, which hold mixes of stocks and bonds. The diversified portfolios tend to deliver steady results, avoiding big losses in downturns.

Among the steadiest choices is JPMorgan US Equity, which has shined in up and down markets. During the downturn of 2008, the cautious fund outdid three quarters of peers. In the rebound of 2009, JPMorgan again outdid most competitors. To avoid trouble, the portfolio managers stay broadly diversified, holding a mix of growth and value stocks. The fund emphasizes companies that generate rich cash flows, including Johnson & Johnson and Time Warner.

The managers sometimes overweight sectors that seem cheap. In the past year, the fund excelled by underweighting utilities, REITs and other dividend-paying stocks. “The market has been overpaying for yields,” says portfolio manager Tom Luddy.

The JPMorgan fund has been overweighting industrial stocks. Those should generate stronger cash flows as the economy grows, says Luddy. A favorite holding is General Motors. After delaying purchases for years, consumers will be forced to replace aging vehicles.

Alliance Bernstein Growth and Income aims to outdo the Russell 1000 value index. To accomplish that, the managers focus on very profitable businesses with strong balance sheets. Such stocks may not sell at rock-bottom prices, but they tend to be more stable in downturns. “When you look at measures like price-book ratios, we are a little bit more expensive than the value benchmark,” says portfolio manager Frank Caruso.

A holding is Berkshire Hathaway, a company that has long been known for its solid balance sheet and rich cash flows. Although the operating businesses have been generating strong profits, the stock sells for a 15 percent discount to fair value, says Caruso.

Columbia Dividend Opportunity holds a diversified mix of stocks that can increase their dividends. The portfolio includes slow growers as well as companies that can boost their payouts at a fast clip. Besides utilities and telecom—traditional favorites of income investors—the fund also has sizable stakes in industrials and technology. Columbia holds some financials, even though many companies in the sector cut their dividends during the financial crisis. “We are focused primarily on the ability of companies to increase their dividends in the future,” says portfolio manager Paul Stocking.

The fund has a sizable stake in pharmaceutical companies, such as Johnson & Johnson and Pfizer. Stocking says that development pipelines include promising drugs that should enable companies to generate more profits and boost dividends.

MainStay Epoch US All Cap seeks companies that are undervalued because their industries are out of favor. Holdings tend to have high returns on equity and strong cash flows. Portfolio manager David Pearl is emphasizing cyclical stocks that will thrive as the economy grows. He is particularly keen on technology blue chips. “The largest technology companies have become value stocks that sell at discounts to the market,” he says.

A holding is Apple. The stock sells for a big discount to the market even though the business is generating huge profits. Pearl expects Apple to gain a burst of new sales in China. He says the market is wary of the stock because the company will not grow as fast as it once did.