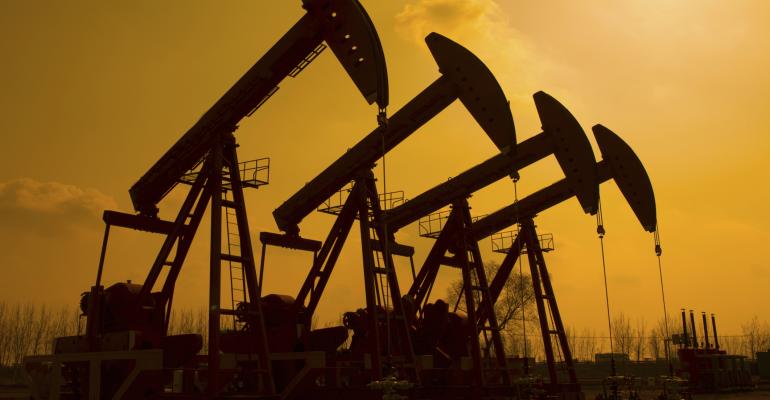 For the third year in a row, the summer driving season kicked off with national gasoline prices at $3.67 per gallon, according to data from the U.S. Department of Energy. Prices at the pump are below the $3.80 – $4.00 danger zone where they contributed to economic soft spots in 2011 and 2012. But they may head higher with crude oil prices rising over $104 last week — well above the levels seen around Memorial Day weekend during the past couple of years. While the conflict in Ukraine may be fueling some of the price gain, this is nothing new — a year ago the world was focused on the conflict in Egypt, and in 2011, the civil war in Libya was the source of geopolitical risk to oil prices. So why — if the United States is producing more oil and consuming less than it was a decade ago — is the price of oil going up, and what does it mean for investors?

The United States is the largest producer of petroleum products in the world, exceeding even Saudi Arabia. Output has been soaring. In fact, U.S. production is up over 50% since 2007. Rising production and relatively flat consumption -- the United States uses about 10% less petroleum than in the middle of the last decade -- has led to rising inventories. U.S. inventories recently hit the highest level since government records have been kept back to 1920.

But this is not all destined for use in the United States. In fact, crude inventories at the United States’ main oil hub in Cushing, OK have declined sharply -- falling by over 50% from a year ago -- to levels not seen since 2008. Instead of being routed to other destinations across the country, oil supplies have been diverted through the southern portion of the Keystone XL pipeline from the Midwest to the Gulf Coast refineries for export overseas. The United States has rapidly become the largest exporter of petroleum products in the world (the United States does not export crude oil by law, but instead exports refined petroleum products).

Petroleum prices in the United States are being boosted by the gap between global supply and demand [Figure 1]. Relatively weak supply growth is the result of declines in oil production and exports in countries such as Libya and Iran that can be tied to geopolitical tensions and in others like Venezuela and Mexico stemming from poor reinvestment. At the same time, global demand has been growing as the world economy expands. It is true that developed market countries like the United States are much more energy efficient than they were 30 years ago -- the United States uses 45% less energy per dollar of gross domestic product (GDP) than in 1980. However, emerging market countries are less efficient and use more energy per dollar of GDP as the manufacturing portion of their economies grow. For example, Thailand and Vietnam both use about twice as much energy per unit of GDP as they did in 1980. As a result, there has been no change in the ratio of world energy consumption per unit of world GDP for decades, according to data from the U.S. Energy Information Agency. The world demand for energy rises in lock step with global GDP, putting pressure on prices. 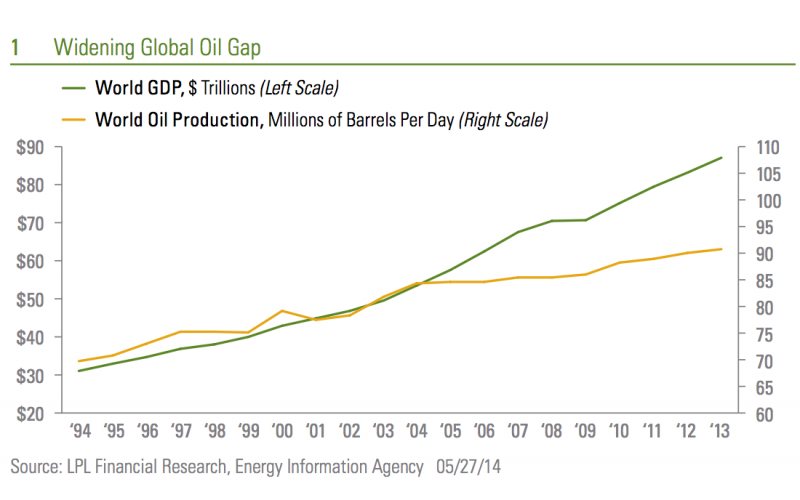 Growth in global demand is coming from emerging markets like China and even Saudi Arabia. Saudi Arabia is now among the top-five largest oil consumers in the world as its youthful population grows, leaving less available for export. In fact, in 2014 it is likely that emerging markets may -- for the first time -- account for more world oil consumption than developed countries [Figure 2]

As energy production continues to increase in the United States, oil supply from Iran and Libya resumes flowing to world markets, consumers react to higher prices, and emerging markets adopt more energy-efficient practices, the gap between demand and supply growth may narrow and ease the pressure on oil and gasoline prices. We will be watching the movements in energy prices carefully to judge their impact on the economy, but at a little over $104 prices may already be near their peak for the year -- crude oil peaked at $110 in each of the past two years before dropping back into the $90s.

The primary focus for investors may be on transportation -- not what they pay to drive their cars, but the increasing amount of oil being moved around the United States. Three-quarters of U.S. refining capacity is located on or near the coasts. These refineries have traditionally tended to use imported crude oil delivered by tanker because it was cheaper than getting U.S.-sourced crude to their operations over land. But the growing supply and a pipeline capacity shortage have led to more crude oil moving around the United States on trucks, barges, and trains than at any point since the government began keeping records in 1981. In fact, rail shipments of oil have more than tripled since the beginning of 2010 [Figure 3]. 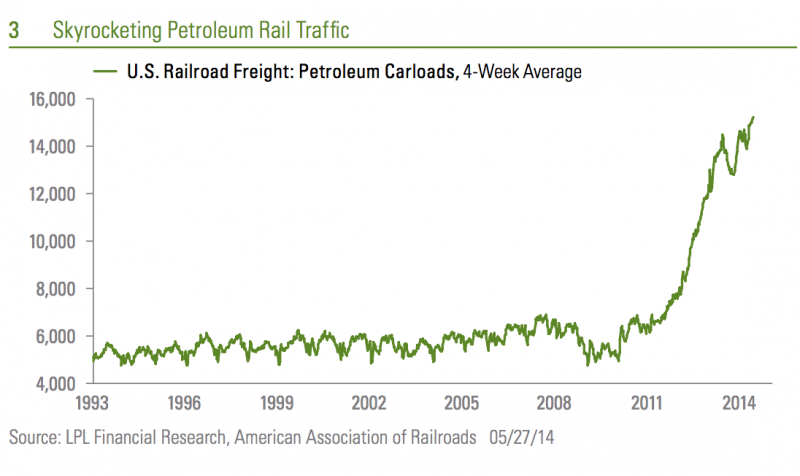 Strong demand for transport of U.S.-sourced petroleum combined with tight pipeline capacity may continue to support stocks in the railroad and trucking industries along with the pipeline operators. We continue to favor these industry groups in the industrials and energy sectors as part of a broader theme of improved business spending.

The opinions voiced in this material are for general information only and are not intended to provide specific advice or recommendations for any individual. To determine which investment(s) may be appropriate for you, consult your financial advisor prior to investing. All performance reference is historical and is no guarantee of future results. Past performance is no guarantee of future results.

Energy Sector: Companies whose businesses are dominated by either of the following activities: The construction or provision of oil rigs, drilling equipment and other energy-related service and equipment, including seismic data collection. The exploration, production, marketing, refining and/or transportation of oil and gas products, coal and consumable fuels.