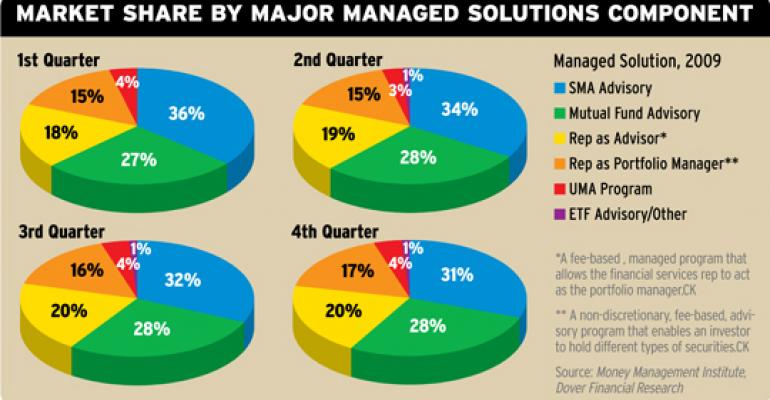 While assets in separately managed accounts (SMAs) have made a comeback, their share of the managed solutions market has declined.

With $1.6 trillion in assets, the managed solutions market is inching back toward its pre-crash high of $1.7 trillion, according to a recent report from the Money Management Institute. Assets rose 26.9 percent or roughly $350 billion during 2009. While assets in separately managed accounts (SMAs) have also made a comeback, climbing 10 percent to $525 billion last year, their share of the managed solutions market has declined as growth accelerated in discretionary and non-discretionary fee-based advisory programs. In fact, over the last six quarters MMI says the SMA market lost 9 percentage points of market share, a decline of roughly $170 billion, while rep as advisor and rep as portfolio manager programs gained four percentage points of market share, each. This shift may seem minor, but it reflects recent investor interest in liquidity and fixed-income investments, says Hilary Fiorella of MMI. Still, with around 36 percent of the managed accounts market, SMAs aren't going anywhere.