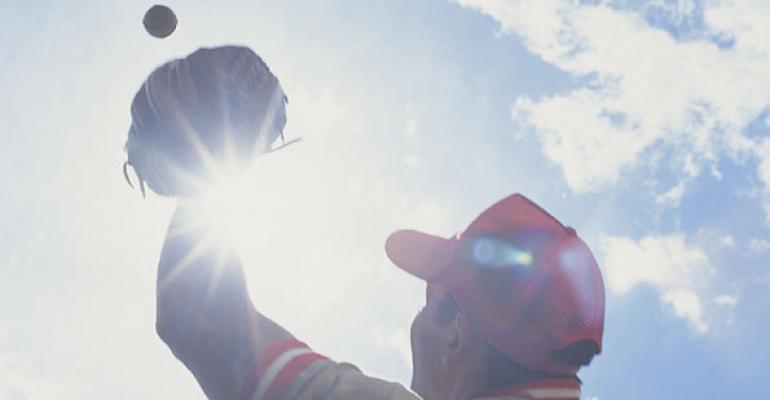 A League of their Own

While the Big Four custodians still dominate the market, some smaller firms are making their presence felt.

One of the fixtures of many a summer blockbuster movie is the small, outnumbered band of heroes battling against overwhelming odds…and winning. (“The Avengers” is a good example this year.) But the theme of David vs. Goliath is nothing new in the world of advisor custodians. The Big Four—Charles Schwab, Fidelity Investments, TD Ameritrade and Pershing Advisor Solutions—dominated the market with more than $1.4 trillion in assets at the end of last year, Aite Group reports; indeed, Schwab and Fidelity hold close to three-quarters of the entire RIA custody market. But a number of smaller players are gaining traction: Scottrade, Shareholders Service Group and TradePMR among them.

Part of the reason for their success, officials at these smaller firms say, is the transition of brokers away from wirehouses where production levels have been raised; the breakaway brokers are looking for new and more flexible arrangements, and smaller custodians that don’t insist they meet asset minimums. (This is particularly helpful for breakaway brokers who aren’t sure how many of their clients, and assets, will come with them when they start life at a new practice.) Some small custodians also have arrangements with third-party service providers that offer up separate account managers who otherwise wouldn’t be available to smaller advisors. Advances in recent technology also allow smaller custodians to offer the same tools their larger competitors do.

But it’s not an easy road for smaller custodians, either. Industry observers say one of the biggest problems afflicting these players is low interest rates. A major source of revenue for all custodians is the spread between the interest they pay on the investor cash they hold, versus the returns they obtain by reinvesting that money elsewhere. But the lower rates that have been a staple of the market since the 2008 crash are putting the squeeze on these spreads.

“In the absence of those margins, in order to be profitable, I think custodians have to be even larger,” says Philip Palaveev, president of Fusion Advisor Network in Elmsford, N.Y. “It puts pressure on everyone, but presumably the larger custodians have more available existing sources of profitability….If you’re a smaller custodian, you don’t have the same negotiating power to create that same level of spread.”

And yet, the smaller custodians are having some success with advisors and assets. One of the surprises contained in a report released last spring by Aite Group was the pace at which smaller custodians were growing, both in terms of assets and advisors. Scottrade Advisor Services, the discount DIY brokerage’s registered investment advisor platform launched seven years ago, grew assets by 45 percent from the prior year to $35 billion, Aite estimates. (The report didn’t break out how much of the growth could be attributed to net asset flows and how much to market appreciation. Scottrade disputed the $35 billion figure but wouldn’t offer one of its own.) 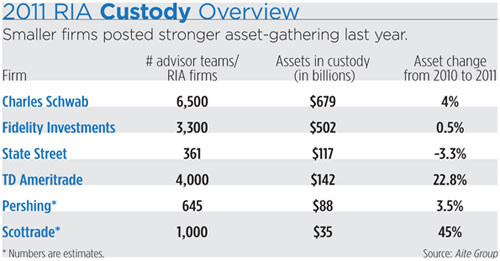 While it’s not hard to put up big percentage increases when you’re starting from a smaller base, Scottrade’s performance was still the biggest percentage increase among six leading custodians Aite tracked. The runner-up in asset growth was TD Ameritrade, with $142 billion in assets from about 4,000 RIAs, a 22.8 percent asset increase.

“It’s staggering, absolutely staggering,” says Aite analyst Alois Pirker. “One theory I have is that with wires pushing average production levels higher and higher, there’s some small folks that [can’t keep up] so they go independent.”

The Big Four have been stable competitors for years. Indeed, Aite’s report showed that, with the exception of TD Ameritrade, there was little change in assets under custody among these leading players between 2010 and 2011. “Most chess matches between top players end up in a draw,” Palaveev says. “It’s the same with the custodian market. They draw each other frequently because they’re good.”

Scottrade has some traction in the market. Palaveev noted that the largest custodians are also discount brokerages whose retail tech platforms in areas such as trading, account openings and service can also dovetail with the needs of advisors.

Scottrade’s entry into the advisor services market is “a natural extension of our core business,” says Brian A. Davis, director of Scottrade Advisor Services. “At the end of the day when you add the advisors into the equation, you’re still providing online discount brokerage services. It’s just you’re serving a different client, and you need to understand the needs of that client.”

Advisors are small businesspeople who are looking for custodians to provide ways for them to operate more efficiently, Davis says. The firm has advisors of “all shapes and sizes” but caters to the state-registered RIAs, those with less than $100 million in AUM, he says.

Scottrade’s advisors are not newbies, Davis says. About half have come from the independent broker/dealer side of the business, while the rest are already established RIAs who are switching or adding custodians. He disagrees with the view that Scottrade caters to small practitioners; advisor AUM averages $30 million to $50 million.

But he did agree that some advisors at wirehouses may not be growing at a pace that’s being set by corporate goals. “That advisor might be quite happy with living on a $50- or $100 million book of business and not having to meet additional requirements,” he says. “That’s another freedom of the RIA model. They have full flexibility to run the business their way, and if they want to grow it at 10 percent versus the company goal of 20 percent, that’s their choice.”

Davis attributed the growth in the past year to advisors feeling more comfortable about making business decisions than they did in earlier years. There also are more outsourcing services—in marketing and technology, for example—that help advisors transition to independence.

SSG has a deal with Envestnet, the Chicago tech service provider, that allows the custodian to provide access to separate account managers for its RIAs, a service that smaller advisors would have trouble getting on their own, Mangan says. At the same time, SSG provides a point of scale for Envestnet as the larger firm tries to expand its reach, he adds.

Frederick A. Van Den Abbeel, executive vice-president of RIA services at TradePMR, a custodian in Gainesville, Fla., agrees that rock-bottom interest rates have hit revenues in the business. His firm has tried to offset that by providing tech tools that enhance advisor trading on its platform, another revenue generator.

TradePMR includes rebalancing tools as a service for advisors who custody with the firm, for example. Last summer it also changed its clearing agent from Sterne, Agee & Leach to First Clearing, the Wells Fargo subsidiary. Van Den Abbeel says Wells’ brand name and financial strength resonated with both advisors and clients who were less acquainted with the former clearing agent.

Advisors on its platform have grown from 950 a year ago to about 1,200 now, he says. Most have left independent b/ds to start their own firms. There’s a lot of business in the marketplace, Van Den Abbeel says.

“I believe things are accelerating in the RIA world,” he says. “If you have 550,000 registered reps who are still with broker/dealers and only 30,000 RIA firms in the country, there’s a huge growth potential for every custodian firm. There’s still much opportunity for all of us to gain market share.”