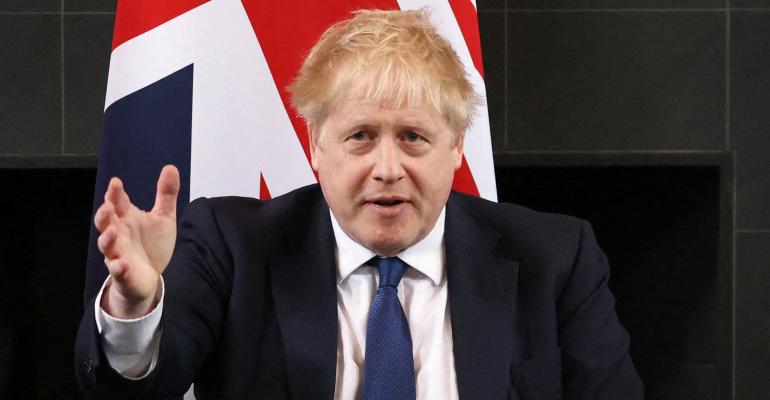 (Bloomberg) -- Boris Johnson hinted his government may further shorten the grace period for foreign owners of U.K. property to register their interests, amid growing pressure on the prime minister to accelerate actions in response to Russia’s invasion of Ukraine.

While the government plans to give people six months to comply with its new register -- already down from the original 18 months -- the opposition Labour Party is pushing for a 28-day notice period to prevent people from having time to move assets abroad. The register is part of the government’s economic crime bill, which is due to be voted on in the House of Commons on Monday.

“We certainly want to go as fast as possible,” Johnson told broadcasters when asked about the bill on Monday, ahead of the parliamentary debate. “There is more to be done.” Foreign Secretary Liz Truss is due to make a statement on the issue in Parliament at 3:30 p.m.

The premier’s comments suggest ministers may be ready to compromise. Ministers are trying to strike a balance between targeting foreign criminals and avoiding trapping legitimate, law-abiding owners.

In a separate amendment to the bill, Russian oligarchs in line to be sanctioned by the U.K. government could have their assets frozen, even before the measures are formally introduced, under a plan tabled by British lawmakers.

The measure, proposed by former minister David Davis, may be voted on in the House of Commons. It reflects concern that Johnson’s government has been too slow to hit oligarchs with wealth in London as a way to pressure Russian President Vladimir Putin to end his invasion of Ukraine.

The British government has already been reacting to pressure to tackle Russian money laundering in response to the invasion of Ukraine, and has also proposed new powers to more rapidly sanction those who have already been punished by British allies such as the European Union, the U.S. and Canada.

The U.K. has lagged the U.S. and EU in sanctioning individual Russians and has attributed the delay to having to build robust legal cases to avoid the restrictions being overturned in court. Britain has targeted 11 wealthy Russians -- as well as Putin and Foreign Minister Sergei Lavrov -- since the invasion.

The government is also under fire over its perceived slowness in granting visas to Ukrainian refugees, after reports only 50 have been issued. It “is certainly not a success,” Tom Tugendhat, chairman of the House of Commons Foreign Affairs Committee, told LBC radio on Monday.

Asked about the number of visas that have been issued, Johnson told reporters he did not have the precise number.

“I think people who have spare rooms, who want to receive people coming from Ukraine, will want us to have a system that enables them to do that,” Johnson added. “And that is already happening.”