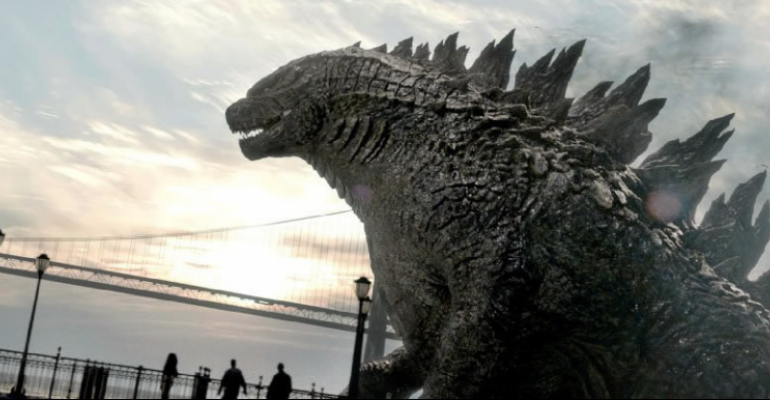 Godzilla, the latest version of Japan’s King of Monsters, took the top spot at the box office this past weekend. But Japan’s stock market looks like a giant mutated lizard stomped all over it. One of the worst-performing stock markets in the world this year, Japan’s Nikkei Stock Average is down 13% in yen and 10% measured in dollars. The drop has been enough to push down the forward price-to-earnings ratio for companies in the MSCI Japan index to a rare discount to the U.S. S&P 500 Index.

Yet Japan’s economy is finally growing. First quarter 2014 economic growth in Japan was a strong 5.9% above the prior quarter and 3.0% above the year-ago quarter, according to data released last week. It marked the fifth straight quarter of growth — a streak not exceeded since before the 2008 – 09 global recession. The quarter’s growth was boosted by spending ahead of a consumption tax increase, which could be largely reversed in the second quarter. Nevertheless, the consensus of economists tracked by Bloomberg expects second half gross domestic product (GDP) growth to maintain a 1.5 – 2.0% pace.

Why has growth returned to Japan? Japan has struggled with growth for many years and began to experiment over a decade ago with now widely adopted stimulus measures including a zero interest rate policy and quantitative easing (QE). The latest aggressive round of QE, enacted over the past year, has finally worked. Economic growth has returned, and inflation has risen to near 2% after averaging zero for the past 20 years. How big is Japan's QE to drive this turnaround? Godzilla-sized. Not 1954’s Godzilla, but 2014's Godzilla. As you can see in Figure 1, growth in Japan’s monetary base has been proportional to the growing size of Godzilla as he appeared in various films over the past 50 years, culminating in 2014’s towering monster. 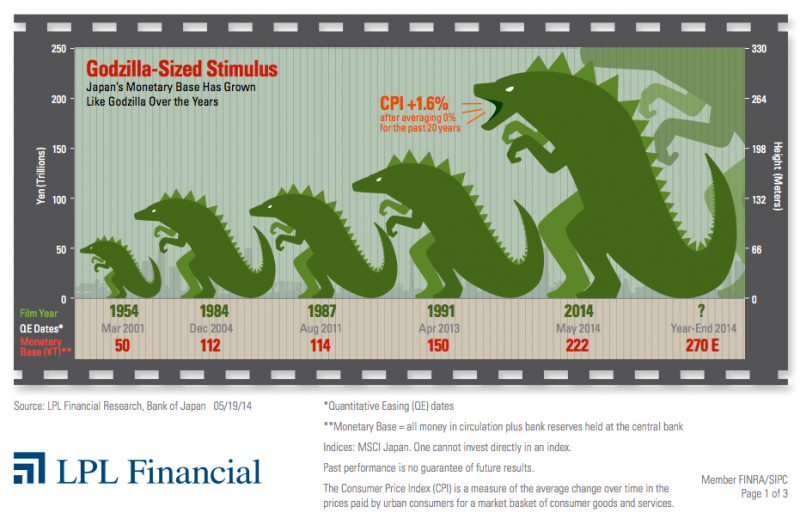 The first round of QE in Japan took place over a four-year period, starting March 2001 and ending December 2004, and grew the monetary base from 66 trillion yen to 112 trillion. The second round came in 2010 and 2011, but the monetary base did not materially expand again until April 2013, when the current program was implemented. With the monetary base at 150 trillion yen, the Bank of Japan (BOJ) announced that it would expand the program aggressively. Now, about a year after it began, it has grown to 222 trillion yen.

To put the amount of QE Japan is doing in perspective, we can look at it relative to the United States. The U.S. Federal Reserve has tapered its QE program from $85 a month to $45 billion a month this year, but at the full $85 per month QE was running about $1 trillion per year. While the BOJ’s QE has a dollar equivalent of roughly $70 billion per month, its economy is only about one-third that of the U.S. economy. As a result, Japan’s QE relative to the size of the economy would be the United States equivalent of a staggering $2.2 trillion per year. The same program is targeted to grow the monetary base to 270 trillion yen by the end of 2014.

The Standard & Poor’s 500 Index is a capitalization-weighted index of 500 stocks designed to measure performance of the broad domestic economy through changes in the aggregate market value of 500 stocks representing all major industries.\

The Nikkei Index is short for Japan's Nikkei 225 Stock Average, the leading and most-respected index of Japanese stocks. It is a price-weighted index comprised of Japan's top 225 blue-chip companies on the Tokyo Stock Exchange. The Nikkei is equivalent to the Dow Jones Industrial Average Index in the U.S. In fact, it was called the Nikkei Dow Jones Stock Average from 1975 to 1985.

The correction this year in the Nikkei has led to a year-over-year decline for the index. Removing the powerful lift to consumer spending from rising stock market wealth that was present over the past year poses a risk to continued economic growth in the face of tax increases. Also, Japan’s bank stocks — main beneficiaries of QE — and leading indicators, have declined sharply over the past year. This combination may diminish policymakers’ confidence in their optimistic growth outlook, and to ensure growth continues, the BOJ may announce an extension of QE beyond 2014. That announcement could happen on Wednesday of this week at the BOJ meeting, though it may be more likely to come this summer.

A commitment to further growth of QE beyond 2014 could be the key to turning around Japan’s stock market. Japan’s stock market began to rally powerfully in late 2012 — ahead of the actual implementation of Godzilla-sized QE in April 2013 — since the plan to do so was transparent given the election outcome and change in leadership at the BOJ. If the announcement of further growth in QE aligns with a fading impact from recent tax hikes, increasing political support for corporate tax cuts, and a push by government pension funds into stocks, it may mean a blockbuster summer for Japanese stocks.