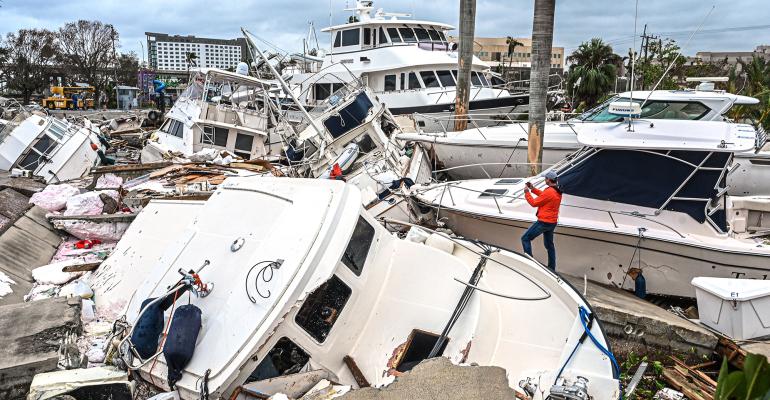 “There is no denying that climate change is driving losses from natural catastrophes,” Ernst Rauch, chief climate scientist at Munich Re, said in an interview. “Insured losses of more than $100 billion a year are the new normal.”

(Bloomberg)—The insurance industry is struggling to adapt to a new normal in which losses fueled by climate change are now regularly exceeding $100 billion a year.

Insured losses from natural disasters hit about $120 billion in 2022, most of which was weather related, according to data compiled by Munich Re. Hurricane Ian, which devastated Florida in September, was responsible for about half that. Including uninsured losses, the total cost of storms, droughts, earthquakes and fires last year was $270 billion.

“There is no denying that climate change is driving losses from natural catastrophes,” Ernst Rauch, chief climate scientist at Munich Re, said in an interview. “Insured losses of more than $100 billion a year are the new normal.”

That’s a major departure from industry norms of less than two decades ago. Before 2005, the year Hurricane Katrina ripped through New Orleans, insured losses had never exceeded an annual $50 billion, adjusting for inflation, according to Munich Re’s records. The much higher loss level that’s taken hold this decade comes as insurers also grapple with a sharp spike in inflation and higher levels of market volatility.

The development is feeding through to the $35 billion market for catastrophe bonds, where yields are soaring. Investors in such debt are now demanding the highest premiums in years to cover issuers against disasters.

Extreme floods have already caused havoc in the first moments of 2023. After years of drought, California is now in a long flood fight as waves of storms roll in off the Pacific, killing at least 14 people, closing highways up and down the state and sending residents fleeing for their lives.

The German insurer said it’s still too early to provide a reliable estimate of the losses caused by Elliott, the name given to the deep freeze that blanketed the US last month.

The Munich Re report also shows that uninsured losses are meaningfully larger than those covered by insurance, which tend to focus on the developed world. Africa and Asia, meanwhile, often face the brunt of the fallout from climate change.

World Weather Attribution, a scientific group that analyzes extreme weather for evidence of climate change, found that flooding caused more than 800 deaths in Nigeria, Niger and Chad last summer. The most devastating floods of 2022 were those that hit Pakistan, leaving at least 1,700 dead and countless more exposed to malaria, cholera and other water-borne diseases. Direct losses stemming from that event are estimated at $15 billion at least, with almost nothing insured, Munich Re said.

With such devastation beyond the scope of insurers to cover, governments and international organizations are looking into new frameworks to channel money to those most affected by climate change. At the COP27 climate summit in Egypt last year, negotiators agreed to create a fund that will help developing nations by securing commitments from rich countries.

The establishment of such a fund “isn’t about dispensing charity,” Sherry Rehman, Pakistan’s climate minister, said after the deal was struck in late November. “It is clearly a down payment on the longer investment in our joint futures.”